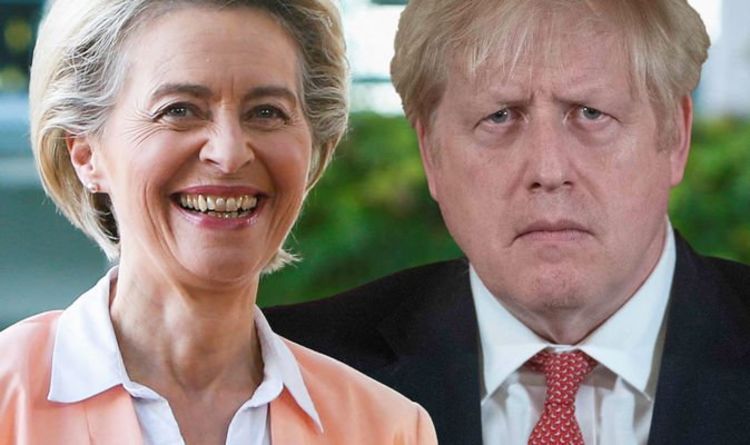 Director for the think tank UK in a Changing Europe, Professor Anand Menon admitted it was difficult to see how the UK and European Union would resolve their post-Brexit trade differences. During an interview with Express.co.uk, he insisted that the Northern Ireland protocol and the movement of goods from Great Britain to Northern Ireland remains a contentious issue. He warned as we come to the end of the grace period, it will become clearer as to how, if at all, the issue will be resolved.

If it is not resolved, Professor Menon added the EU may take the UK to court with the goal of inforcing tariffs on the country in a messy court battle.

Professor Menon said: “I think there are always going to be a degree of tension between the two sides.

“When you have two close sides that trade together a lot, both of whom want the other side to fail, that is not a recipe for harmony.

“But secondly, on how do we solve this, it is hard to see at the moment how we solve the Northern Ireland protocol question.

DON’T MISS: Varadkar says EU may back down to UK and agree Brexit grace period

“This is simply because both sides seem to have pretty clear red lines.

“Neither side seems inclined to make the necessary compromises and the EU think the UK should move by signing up to some of its rules.

“While the UK thinks the EU is being overly legalistic in implementing its own rules.

“We are going have to see how this pans out in September.

“By the middle of September, we will get a clearer sense as to whether there is a resolution forthcoming.

“If not, it goes to court and there is potential for tariffs against the UK as retaliation.

“This could all get quite messy if there isn’t a solution.”

He claimed this was because for Lord Frost, like many Brexiteers, the point of leaving the European Union was to be free of EU rules.

He said: “David Frost has said that is absolutely out of the question.

“For him, the whole point of Brexit was to be free of EU rules.

“That is what he would have to do but I am pretty convinced that he is not going to do it.”