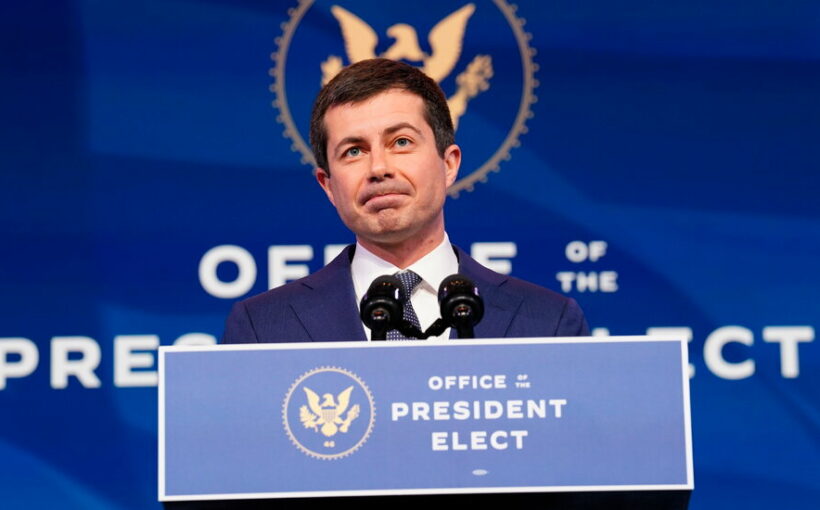 WASHINGTON — Pete Buttigieg, the former mayor of South Bend, Ind., will testify before the Senate on Thursday for his confirmation hearing to become President Biden’s transportation secretary.

If confirmed, Mr. Buttigieg, 39, would become the first openly gay cabinet secretary to be confirmed by the Senate and the youngest member of Mr. Biden’s cabinet.

In his testimony before the Commerce, Science and Transportation Committee, Mr. Buttigieg will not focus on specific policy proposals, and instead will outline a broad vision for his tenure, one centered on safety, green infrastructure and investing in transportation overhaul to revive the economy, according to an advance copy of his remarks.

“We need to build our economy back, better than ever,” he is expected to say. “The Department of Transportation can play a central role in this.”

Mr. Buttigieg’s supporters have said his background could give Mr. Biden an effective emissary who can help pass large-scale changes in infrastructure.

But his detractors have said Mr. Buttigieg’s record on police practices and race relations — including his firing of a Black police chief and his inability to diversify South Bend’s overwhelmingly white police force — coupled with his relatively thin experience with the specifics of transportation overhaul mean he has much to prove.

Mr. Buttigieg said that he would try to use his role to help keep travelers safe from the pandemic, while aligning the agency’s initiatives with Mr. Biden’s goals of climate change, racial justice and job creation.

“I think we have a big opportunity,” he said in an interview conducted by video before his hearing. “I’m real excited about what we can do to really build up our infrastructure base in this country. There is no reason Americans should settle for less than our counterparts in other countries have.”

If confirmed, Mr. Buttigieg would take over an agency with 55,000 employees and a budget of $87 billion at a time when the nation’s transportation systems are reeling from the pandemic.

Mr. Biden has indicated that infrastructure overhaul will play a large role in the start of his administration. On his first day in office, he signed an executive order requiring a mask mandate on interstate travel and federal property. His $1.9 trillion coronavirus relief package is also slated to include at least $20 billion for struggling public transportation systems. He also wants to pass an ambitious $2 trillion infrastructure plan that would require significant negotiation with Congress.

Mr. Biden — who has likened Mr. Buttigieg to his son Beau, who died in 2015 — believes Mr. Buttigieg will be integral in pushing the administration’s “Build Back Better” agenda.

“Jobs, infrastructure, equity, and climate all come together at the D.O.T.,” Mr. Biden said in announcing Mr. Buttigieg as his nominee for transportation secretary. “I trust Mayor Pete to lead this work with focus, decency and a bold vision.”

“He is a very good explainer of what he is seeking to do,” said Beth Osborne, the director of Transportation for America, an advocacy group. “And I think transportation could really use that right now.”

Mr. Buttigieg, who met with numerous lawmakers after being nominated, has said “there is such bipartisan energy for infrastructure” that he believes a deal can be done, but that it will require significant work. “I think there’s a real chance to do something,” he said. “I think the challenges come when it’s time to work out how we’re going to pay for it.”

As presidential candidate, Mr. Buttigieg released a $1 trillion infrastructure plan that aimed to create six million jobs, stem the effects of climate change and bolster investment in transit, passenger rail and electric vehicles while trying to cut the nation’s backlog of road repairs by half in 10 years.

As Mr. Biden’s nominee, Mr. Buttigieg has indicated that climate change will be a focus for the department, by promoting electric vehicles to reduce greenhouse gas emissions. He said he would look to reverse decades-long transportation policies that have led to limiting low-income individuals and minority residents access to transportation.

Jeff Rea, the president of South Bend’s regional chamber of commerce, said he was initially skeptical when Mr. Buttigieg put forward the plan, but said $180 million to $200 million in investment in the downtown area followed, and he praised the mayor for his “data-driven” approach to transportation overhaul.

But Jorden Giger, a founder of the city’s Black Lives Matter chapter, said Mr. Buttigieg’s downtown revitalization plan, along with a program to demolish or repair 1,000 of the city’s houses, had accelerated gentrification and contributed to reduced rates of minority homeownership.

Black leaders in South Bend have also criticized Mr. Buttigieg’s frosty relations with the community, and said they were worried his lackluster record on supporting minority businesses and appointing people of color to staff positions would continue.

They pointed to city reports that show South Bend, a city that is around 52 percent white, awarded slightly less than two percent of its $101 million in city contracts to businesses owned by minorities or women in the 2017 fiscal year, and slightly under 3 percent of its contracting dollars the next fiscal year. A report by Democracy in Color, a political organization focused on racial equity, also found that as of June 2019, around 82 percent of Mr. Buttigieg’s senior political appointees where white.

“If past behavior is an indicator of future behavior,” said Henry Davis Jr., a Black councilman from South Bend, “then we kind of already know what’s going to happen.”