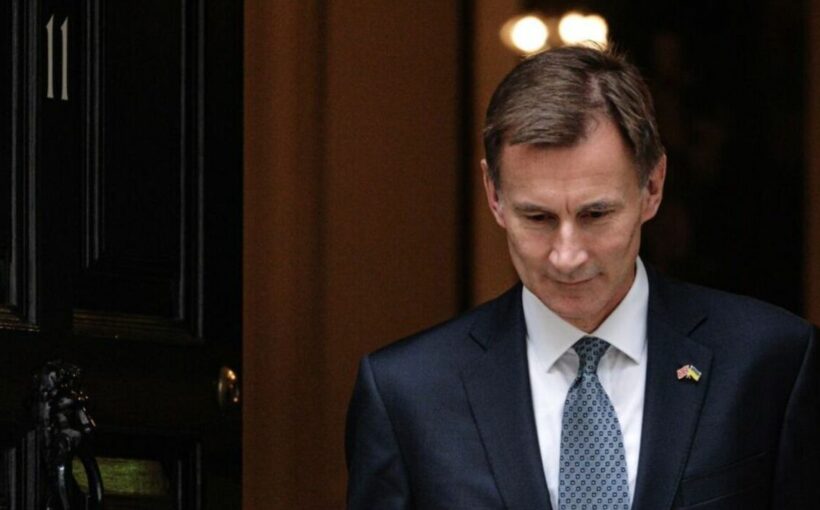 Jeremy Hunt has aired his joking disappointment that the handcrafted gold wallpaper – bought as part of Boris and Carrie Johnson’s £200,000 refurbishment for £840 a roll – is not hanging in the No 11 flat. The Chancellor made a joke about it at the Spectator Parliamentarian of the Year awards – but it may not have landed as he intended.

Mr Hunt, who was given the Survivor of the Year award, said he recently toured the flat with his wife.

He said. “We are moving in, as it happens this weekend.

“I had one or two other things on until then. We did go in though, just to have a look around the flat first and, of course, where did we want to go first? We wanted to go and see the wallpaper.”

He told the audience: “The massive disappointment was to discover that wallpaper — this may be a world exclusive — had started to peel off of its own accord and had been painted over by Liz Truss,” he said. “So I will be saying to my children: ‘Scratch over there, there’s gold in them walls.’”

His comments prompted confusion, as supporters of Ms Truss said she had not had any time to do work on the flat as part of her brief tenure as Prime Minister, The Times reported.

She arrived in No 11 to discover that the kitchen had been painted yellow, while the dining room was painted a dark red. There was no gold wallpaper, although a leaked invoice suggested the Johnsons did have expensive tastes.

They spent £1,500 on wallpaper in the drawing room — a description was not provided — and also spent £2,250 on 10 rolls of Espalier Square in one of the other rooms. While some of the wallpaper was indeed peeled off, none of it was gold.

A source close to Mr Hunt later clarified his comments at the awards dinner had been a joke, The  Times reported.

Upmarket interior designer Lulu Lytle oversaw the redecoration, which cost at least £112,000 – well in excess of the £30,000 annual public grant a PM receives for their living quarters.

The refurbishment of the Downing Street flat was initially funded by Lord Brownlow, a Tory donor, after Mr Johnson exceeded his annual taxpayer-funded allowance of £30,000 for renovations.

Lord Geidt, the former independent adviser on ministerial interests, investigated the arrangement with Brownlow amid concerns that it represented a potential breach of the ministerial code.

He cleared Mr Johnson of breaching the rules after he repaid the money.

However, the Conservative Party was fined by the Electoral Commission for failing to properly declare the £67,000 donation from a firm controlled by Brownlow.

Mr Hunt became the UK’s fourth chancellor this year when he placed Nadhim Zahawi, who served the shortest stint ever in No 11.

Rishi Sunak won ‘Comeback of the Year’ at the awards and Labour’s Rachel Reeves won the ‘Chancellor of the Year’ gong.