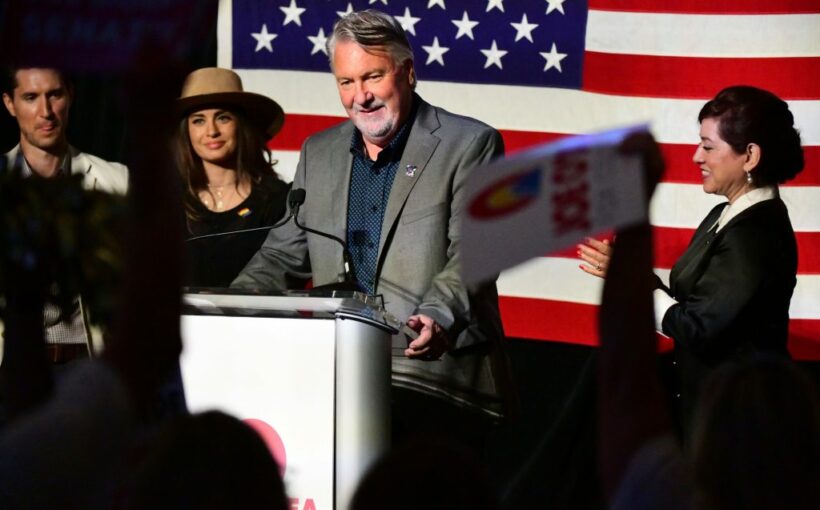 A super PAC tied to some of the nation’s top Democrats was behind the $4.2 million splurge on the Republican nominating contest for U.S. Senate, according to recently filed campaign finance reports.

“We saw two deeply flawed candidates running against each other so we worked to weaken both their campaigns,” Senate Majority PAC President J.B. Poersch said in a statement Wednesday night.

By the time ballots were counted on June 28, Democratic Colorado’s spending had dwarfed that spent by the actual Republican candidates. O’Dea, a construction company CEO, and Hanks, a state representative, spent less than $3 million between them, according to campaign finance records, with almost all of it coming from O’Dea’s camp.

O’Dea positioned himself as the relative moderate to Hanks, a 2020 election denier who attended the Jan. 6, 2021, rally to support defeated President Donald Trump. There’s no evidence he was part of the subsequent insurrection. O’Dea won the nomination by about 56,500 votes, or nearly nine percentage points.

On election night, O’Dea claimed victory over Schumer more than his Republican rival, down to printing a mocked up newspaper headlined “O’Dea defeats Schumer” and with a photograph of Democratic incumbent U.S. Sen. Michael Bennet. Previously, O’Dea’s campaign filed a complaint with the Federal Elections Commission and filed a lawsuit over anonymous mailers boosting Hanks.

“Guys like Chuck Schumer, George Soros and Michael Bennet care about one thing and one thing only — keeping political power,” O’Dea spokesperson Kyle Kohli said Thursday. A PAC affiliated with Soros gave Senate Majority PAC $2.5 million around when the Democratic Colorado ads began airing. “What Democrats did was sleazy, deceitful and more likely than not criminal. Joe O’Dea beat Schumer, Soros and Bennet in June. He’s going to do it again in November.”

After Democratic Colorado’s funding became public, the Senate Majority PAC claimed its own victory in setting up Bennet for the pursuit of his third full term. In pure cash, the incumbent entered July with a nearly 10-to-1 advantage over O’Dea, with $8 million in the bank to O’Dea’s $842,000.

“Our efforts forced O’Dea to burn through cash, embrace Trump, and show his true colors as a rubber stamp for (Republican Senate Minority Leader) Mitch McConnell and a dangerous MAGA agenda that is totally out of step with the voters who will decide the general election in Colorado,” Poersch said.

On Tuesday, McConnell appeared at a fundraiser for O’Dea and pledged to go “all in” on the race. He called O’Dea “the perfect candidate for the nature of your state,” and that it’s a winnable race for the Republican, according to Axios.

Colorado has trended blue in the past decade, with only one Republican currently holding statewide office and incumbent Republican U.S. Sen Cory Gardner losing by nine percentage points in 2020. The nonpartisan Cook Political Report lists this senate race as likely Democrat.

However, O’Dea is banking on a favorable national climate for Republicans and has been working to tie Bennet and Biden to ongoing inflationary pressures and economic uncertainty.

The Bennet campaign declined to comment for this report.