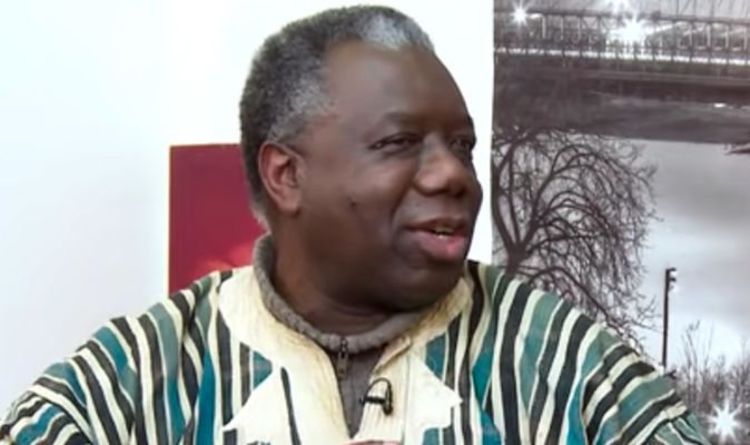 Winston Churchill statue should be torn down says anti-slavery activist

The anti-slavery campaigner made the controversial demand as he discussed the recent acquittal of four Bristolians facing criminal damage charges for the toppling of Edward Colston’s statue at a Black Lives Matter protest last year. Kofi Mawuli Klu branded the former Prime Minister a “killer” for his views on colonialism and warned Britons will soon “awaken” and “tear down” Winston Churchill’s statue in Parliament Square. Speaking to LBC, Mr Mawuli Klu said: “Churchill is a criminal as far as colonised across the world are concerned.

“There’s some people of conscience in this country who also oppose Churchill.

“The time will come when masses awakening, people in this country, will tear down that statue.”

LBC host Matt Frei had to contain co-panellist Roger Helmer, who erupted to say: “I really want to come back on this. We can’t let Kofi get away with this.”

He replied: “Winston’s Churchill statue should be brought down.”

Mr Helmer was then offered the opportunity to share his point of view, slamming Mr Mawuli Klu for his comments.

The former British MEP insisted Winston Churchill was the “greatest prime minister of the 20th century”, arguing he possessed “some of the failings of his time” with his views on colonization.

Mr Helmer then condemned Mr Mawuli Klu’s calls for direct action, insisting that “we live in a society where we can change things through the ballot box and we should not be changing things through violence in the streets.”

Attorney General Suella Braverman said on Friday she is “carefully considering” whether to refer the Bristol Colston statue case to the Court of Appeal after a jury cleared four people of criminal damage for toppling the monument in June 2020.

Writing on Twitter, she said: “Trial by jury is an important guardian of liberty & must not be undermined. However, the decision in the Colston statue case is causing confusion.

“Without affecting the result of this case, as Attorney General, I am able to refer matters to the Court of Appeal so that senior judges have the opportunity to clarify the law for future cases. I am carefully considering whether to do so. “

Former justice secretary Robert Buckland said he thinks the jury’s decision in the case of the Edward Colston statue was perverse.

The Tory MP told BBC Radio 4’s Today programme: “Frankly I do. I think anybody watching those scenes cannot fail to be disturbed at the very least and appalled by what happened.

“I don’t think we want to see our crown courts becoming political playgrounds – they’re not places for politics, they’re places for the law to be applied and for the evidence to be assessed.

“Sometimes we will get jury verdicts that perhaps fly in the face of the law and sometimes the evidence, that is the price we pay for the admirable system, the system of jury trials that I and many others strongly believe in.”