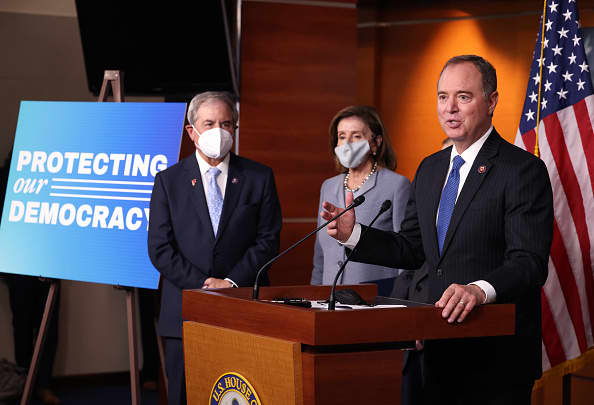 The House select committee investigating the deadly Capitol invasion will move to subpoena some witnesses as a first course of action if they are seen to be resistant or hostile to the panel's goals, Rep. Adam Schiff said Tuesday.

The panel will make requests "where we think they'll be complied with," said Schiff, one of seven Democrats on the nine-member committee.

But it will skip "time-consuming steps," such as asking for documents or interviews with those parties, and go "straight to subpoenas where we think we're dealing with recalcitrant parties," the California lawmaker said.

The committee members "feel a real sense of urgency," Schiff told reporters in a hallway gaggle at the Capitol. "Where we do meet resistance, we're going to push back hard," he said.

Hundreds of supporters of then-President Donald Trump attacked the Capitol on Jan. 6 in a bid to prevent Congress from confirming Joe Biden's victory in the 2020 election. The invasion, which followed a rally during which Trump encouraged supporters to march on the Capitol, led to several deaths. Several hundred people were charged with crimes related to the insurrection.

The committee's aggressive stance regarding subpoenas and witnesses suggests a shift in how Democrats are willing to wield their oversight powers after being repeatedly rebuffed by the Trump administration.

Schiff said that Biden's White House is "supportive of getting the truth out" and is unlikely to put up the same "bogus" roadblocks that lawmakers faced under Trump, such as the variegated claims of executive privilege used by administration officials to exempt themselves from cooperating with Congress.

"We also have a Justice Department that may be supportive if we need to hold people in contempt," he added.

The select committee was formed by House Speaker Nancy Pelosi, D-Calif., after Senate Republicans voted down a bid to establish an equally bipartisan "9/11-style" commission to analyze the Jan. 6 attack.

Compared to the 9/11 commission, the investigation into the Capitol invasion is moving "with great rapidity," Schiff said.

The select committee last month demanded a tranche of records from more than a dozen social media companies, ranging from industry giants Google and Twitter to pro-Trump fringe websites.

The panel has also reached out to 35 private-sector firms, asking them to preserve records that may be relevant to the investigation. House Minority Leader Kevin McCarthy, R-Calif., threatened those companies not to comply with the probe.