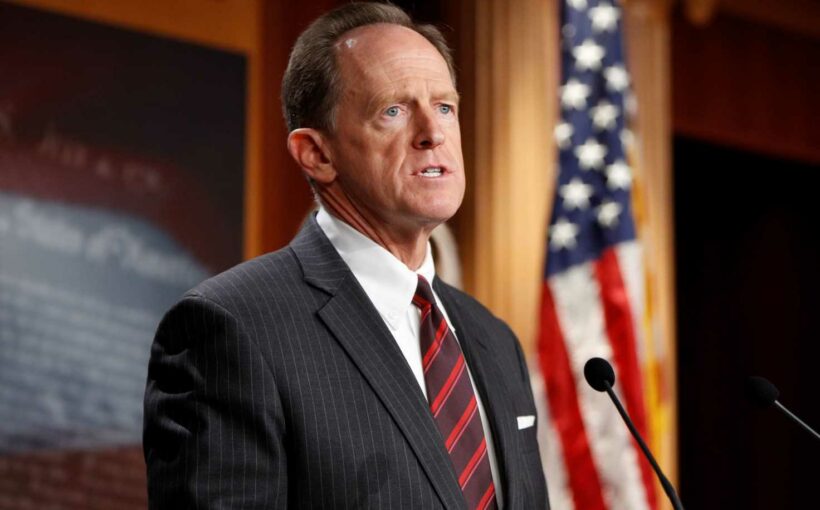 Sen. Pat Toomey has urged his party not to nominate former president Donald Trump as its presidential candidate in 2024, calling his conduct in the aftermath of the 2020 election "completely unacceptable."

The Pennsylvania Republican voted to convict Trump in the impeachment trial over his role in stoking the January 6 attack on the Capitol by his supporters, fueled by the former president's misinformation about the election being "stolen" due to widespread voter fraud.

Speaking to CNBC at the Ambrosetti forum in Italy on Friday, Toomey, who is not seeking re-election in 2022, suggested his party consider other presidential nominees in 2024.

"I think that the future of our party is to be a party of ideas, and not to be a party about any one individual, and I think we will learn a lot from the next set of primaries," he said.

"I think after what happened post-2020 election, I think the president's behavior was completely unacceptable, so I don't think he should be the nominee to lead the party in 2024."

Despite his staunch conservative record over a two-decade congressional career, Toomey has broken away from the unwavering fealty to the former president that now serves as a litmus test in the GOP. The Pennsylvania Republican Party in March narrowly voted against formally censuring Toomey for his vote to convict Trump, instead issuing a "strong rebuke."

"It is President Trump who departed from Republican orthodoxy and conservative orthodoxy in a variety of ways. I stuck to the conservative views that I've had for a long time, he had a different point of view on matters such as trade and sometimes immigration and other things."

Trump loyalism, and a dispute over the investigation into the deadly storming of the Capitol, have become focal points of a battle for the soul of the Republican Party in recent months.

The former president still holds significant power over the GOP, with candidates loyal to him aiming to oust incumbent and mainstream Republicans in regional primary votes across the country, while Trump continues to push lies about the 2020 election being stolen.

Toomey also criticized Trump's deal with the Taliban to withdraw U.S. forces entirely from Afghanistan, a move he said was compounded by current President Joe Biden's administration's imposition of a symbolic date for evacuation of American forces.

"My view is we had gotten to a point, and we could have sustained a very modest presence on the ground, extremely low rate of casualties, and we hadn't had a death in Afghanistan in well over a year, a modest cost monetarily," he said.

"For that price, we would have supported the Afghans who were actually the tip of the spear, the ones fighting, and could have prevented the re-emergence of terrorists from a Taliban-controlled state."