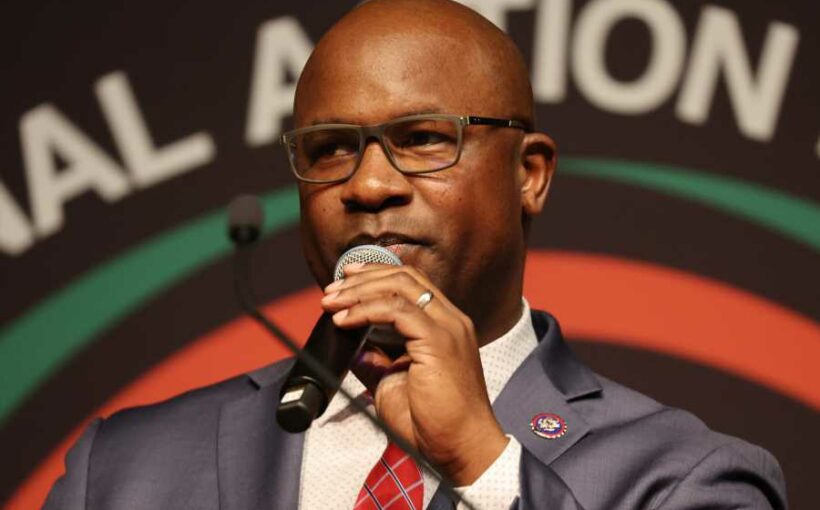 House Democrats will ask their chamber on Wednesday to condemn last month’s massacre at a grocery store in Buffalo, New York. They will also ask them to rebuke the great replacement theory, a white supremacist conspiracy the 18-year-old gunman cited as motivation for the killing spree that left 10 Black people dead. No one expects any Republicans to vote for this resolution, which they’ll surely consider to be a partisan maneuver. Democrats will ask for it anyway because “Congress has to do something,” says Rep. Jamaal Bowman (D-N.Y.), who authored the resolution.

And they must “do something,” Bowman says, because Republicans have been key propagators of that theory. “It’s really important for Republicans and Democrats to be on the record about this issue,” he adds, worried that his party isn’t taking white supremacy as seriously as it should. “It shouldn’t have been a freshman member of Congress [proposing this resolution]. If we were more focused on this as a party, we would be doing a lot more to not just condemn, but also put structures in place to stop this from happening again.”

The great replacement theory entails a false plot that non-white immigrants are entering Western countries to disempower and subjugate white people. The racist formulation originated in France and found resonance with the American far-right, whose adherents often blame wealthy Jews for orchestrating the plan. A version of this conspiracy entered the GOP mainstream during the Trump era, often expressed through “build the wall” rhetoric that blames Democrats for encouraging immigrants to cross the southern border. Right-wing provocateur Tucker Carlson has been a key purveyor of the theory, and a number of House and Senate Republicans have dispensed aligned rhetoric — including Rep. Elise Stefanik (R-N.Y.), the third-ranking House Republican.

Polls have failed to capture exactly how many Americans subscribe to the conspiracy, but it inspired the gunmen in high-profile tragedies over the last decade, including the 2015 shooting at a Charleston church that killed nine and the 2018 rampage at a Pittsburgh synagogue that killed 11. “That triggered for me how this theory is radicalizing people all over the country on a daily basis,” Bowman says of learning about the theory’s ties to mass violence.

Buffalo’s shooting was the first racially motivated massacre in New York state, as far as Bowman could recall. “I was scared, taking my kids to school and literally sobbing in my car [thinking about] what might happen to them,” Bowman, who is Black, recalls of hearing the news. He learned about the manifesto and watched some of the footage the gunman had recorded as he carried out the atrocity. “I just couldn’t bear it,” Bowman says.

That heinous crime is precisely why Democrats must respond, Bowman says: “Oftentimes, we in the Democratic party believe that Republican rhetoric is so outrageous that the American people aren’t going to be influenced by it. We hope that the American people, by and large, will not be influenced enough to vote against Democrats at the polls. But if it radicalizes one person to commit a mass murder, then we have failed as a Democratic Party — which is why we got to do everything in our power to push back on it.” The vote, his thinking goes, will illustrate clearly that Democrats decry white supremacy and its consequences, while forcing Republicans to declare where they stand.

The resolution against great replacement theory enters the House with more than 100 Democratic cosponsors from across the party’s big tent, uncharacteristic unity for a party often mired in debate over the best way to respond to the GOP’s racist provocations. Such unity should help the Democrats’ cause, says Lanae Erickson, a senior vice president at Third Way, a moderate Democratic think tank. Republicans have not uniformly embraced the conspiratorial rhetoric, nor have GOP voters, and February polling from the Democrats’ congressional campaign arm suggests the party only stands to gain when they stand up to culture war-related attacks. Even so, “Democrats need to be careful not to overplay their hand,” Erickson cautions. “They want policy makers to be focused on getting inflation under control and not arguing about racial theories with Tucker Carlson.”

Bowman’s resolution will also name the 10 victims of the Buffalo tragedy, ask for a national day of remembrance, and ask his colleagues to combat white supremacy with a “whole of government” effort. “This is not just a one-off resolution,” Bowman vows, noting he’s working on a broader bill to combat white supremacy. “It’s about continuing to look at where white nationalism lives and breathes in our democracy, where it lives and breathes in our law enforcement, and to ultimately do something about it.”