Home » Politics » ‘Do your worst!’ Britons hit back as EU ready to ‘go nuclear’ if Boris triggers Article 16 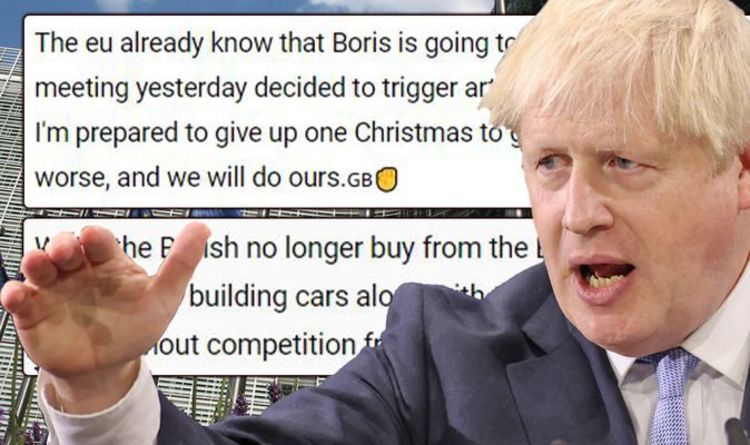 It is believed Prime Minister Boris Johnson is waiting until the end of COP26 in Glasgow to trigger Article 16 and subsequently rip up the Northern Ireland Protocol. But Tom Parker, president of the British Chamber of Commerce EU, has revealed senior European Union chiefs have already discussed a plan to retaliate if the Brexit mechanism is invoked. He explained the EU retaliation could unleash “potentially major” consequences, such as problems with the supply chain in the days and weeks leading up to Christmas.

Mr Parker told Sky News: “The position of EU leaders is one that has been evolving for some time now.

“The UK has expressed the right or indicated it would be prepared to take serious measures, like trigger Article 16.

“There has been a concern and significant discussion about the implication of this, and what the EU might do in turn, should Article 16 be triggered.

“The EU has quite a few options on the table, and that is up for serious debate.”

He added: “I think one option the EU has discussed, or at least certain member-states have put forward, is to terminate Trade and Cooperation Agreement.

“That would be the nuclear option.”

But furious Britons have hit back at the potential retaliatory threats from the EU, daring them to take on Brexit Britain and in turn, feel the implications of their own.

Reacting to our initial story, Express.co.uk reader MI7 warned: “The EU already know that Boris is going to trigger Article 16.

“A Cabinet meeting yesterday decided to trigger Article 16, it will be announced soon.

“I’m prepared to give up one Christmas to get our dignity back.

“Let the EU do its worse, and we will do ours.”

Alison2015 raged: “At the end of the day we can not be held by continuous barrage of threats.

“This has been going on since the referendum and all through this year too.

“There has to come a point where we say enough is enough and deal with a little bit of hardship!”

Express reader Prometheus also warned: “When the British no longer buy from the EU then they can buy cars built in Britain.

“Tesla will be building cars along with the Japanese and it is a growth market for them without competition from the EU.”

During his interview with Sky News, Mr Parker had explained the range of alternative options the EU could enforce in order to hit back against Britain triggering Article 16.

He said: “Other options available to them are putting tariffs on certain products that the UK is exporting.

“Or they could make trade more practically complicated, such as stepping up controls on goods exported out of the UK and even products going into the UK.

“In effect, the EU would create a big blockage at the ports and then you would have problems with the supply chain going into the Christmas period which would be damaging for everyone.”

The threat of Article 16 being triggered has intensified after the latest round of talks between the UK and EU over the Northern Ireland Protocol ended in yet another stalemate.

Britain’s Brexit Minister Lord Frost has long-wanted to overhaul large parts of the Protocol, but European Commission vice president Maros Sefcovic has continued to insist Brussels will not cave to these demands.