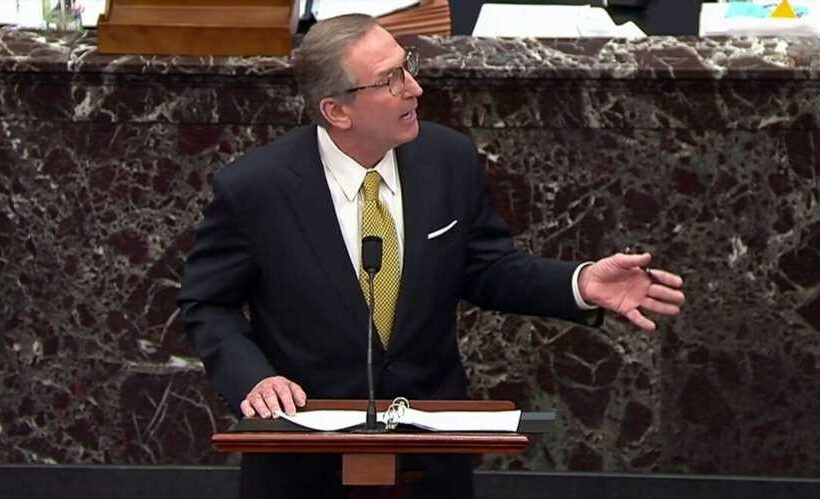 Ex-President Donald Trump’s legal team presented an endless stream of lies, bad faith arguments and out-of-context clips on Friday in an effort to excuse the former president for riling up his supporters to storm the the Capitol, watching silently as they violently overtook the building, and then, when he finally called for peace, still praising the violent mob.

Instead, his impeachment defense lawyers showed Democrats using the word “fight” over and over again, falsely claimed “antifa” stormed the Capitol on Jan. 6, and presented clips of Black Lives Matter protests to distract from Trump’s long record of encouraging violence.

“Unlike the left, President Trump has been entirely consistent in his opposition to mob violence,” Trump attorney Michael van der Veen said. “For Democrats, they have clearly demonstrated that the opposition to mobs and their view of using the National Guard depends upon the mobs’ political views.”

The defense presentation came after two days of House Democratic managers laying out Trump’s long history of encouraging violence. Trump’s team tried to turn the focus elsewhere. They’re at an advantage, since they’re likely to succeed whether they make a strong defense or not. Most Republicans voted earlier this week that the entire trial should be dismissed because Trump is no longer the president. Unlike that vote, which required only a simple majority to proceed, a conviction in the Senate requires a two-thirds vote — a bar that seems unattainable for Democrats.

Still, Trump’s impeachment managers were forced to offer something in his defense, beyond that he cannot be impeached now that he’s out of office. They wrapped up after less than three hours of defense, even though they were allotted 16, and spent some of that time replaying the same clips.

“Not only President Trump’s speech on January 6, but indeed his entire challenge to the election result, was squarely focused on how the proper civic process could address any concerns to the established legal and constitutional system,” said van der Veen, who previously said in an impeachment trial brief that Trump was right to claim he’d won the election in a landslide. 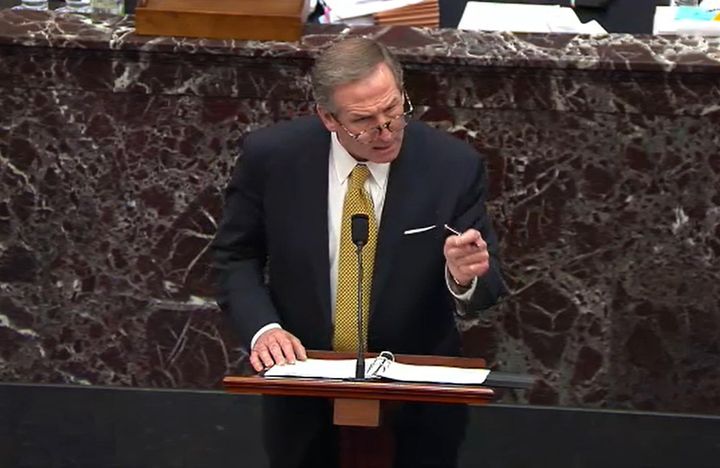 An aide working behind the scenes for Trump’s legal team told HuffPost this week that, after the disastrous performance on Tuesday, Trump’s political aides directed the lawyers to think of the trial more as a press conference being held after they’d already won. The aide said the legal team was walking into the chamber with 45 GOP votes to acquit in their pockets, and they shouldn’t try to win the impeachment case like it was an actual trial before a judge.

The resulting strategy was a presentation of an alternate reality untethered to Jan. 6 or the Democratic arguments. Trump’s lawyers offered a wholly different view of Trump than the world has known for the past five years ― one who never said there were “very fine people” among the white nationalist rally in Charlottesville in 2017, or meant violence when he told supporters to “fight like hell” on Jan. 6. They put a video together of Democratic impeachment managers simply using the word “reportedly” to show that much of the evidence Democrats presented came from news reports. They recycled clips of Democrats urging for Trump’s impeachment during previous scandals.

The focus on language used by Democrats ― often using the same clips multiple times, including celebrities along with actual politicians ― disregarded the crucial fact that Democrats talking about “fighting” didn’t lead to insurrections.

Trump’s defense also focused narrowly on his speech Jan. 6, rather than rebutting Democrats’ argument that his comments that day were part of a long campaign to argue the election had been stolen and his supporters must act.

Trump’s supporters — as they’ve repeatedly said in court statements — took Trump’s call to arms literally. They stormed the Capitol because that’s what Trump seemed to want them to do — to “stop the steal” and “stop the count.”

Probably the most egregious claim Trump’s lawyers made was that it actually wasn’t Trump supporters who stormed the Capitol on Jan. 6; it was various unidentified “extremists” and the supposedly fearsome anti-fascist group known as antifa.

After Trump held a rally outside the White House that day, “a small group looking to engage in violent and menacing behavior hijacked the event for their own purposes,” van der Veen said.

“According to publicly available reporting it is apparent that extremists of various different stripes and political persuasions preplanned and premeditated an attack on the Capitol,” van der Veen said. “One of the first people arrested was a leader of antifa. Sadly, he was also among the first to be released.”

It was Trump supporters who attacked the Capitol ― Trump supporters wearing Trump shirts and Trump hats, waving Trump flags and screaming Trump’s name as they sought to stop Congress from certifying Trump’s loss in the November election. Every photograph from that day shows their political paraphernalia; members of Congress and HuffPost reporters saw them firsthand both inside and outside the Capitol.

The “leader of antifa” van der Veen had in mind is probably John Sullivan, an odd duck who previously organized protests for racial justice in Utah but who had been disowned by Black Lives Matter activists there. It’s dishonest to suggest he’s a representative example of the people who stormed the Capitol ― dozens and dozens of people arrested for their involvement in the riot have said on social media and admitted to law enforcement they were there in order to support the president because the president told them to do it.

It’s not the first time Trump’s legal team suggested it wasn’t Trump supporters at the Capitol. They also claimed in a formal brief this week that “the people who criminally breached the Capitol did so of their own accord and for their own reasons.”

The presentation also built on the culture war arguments Trump’s team made during their appearance on Tuesday. Van der Veen said impeachment was “constitutional cancel culture.” The Black Lives Matter protest footage was overwhelmingly violent. And they even suggested that Democrats were simply misunderstanding Christianity when they noted that Trump retweeted an announcement that “calvary” was coming on Jan. 6. It wasn’t a misspelling of “cavalry,” they said. It was a reference to Jesus’s crucifixion.

Whatever it takes to argue Trump did nothing wrong.