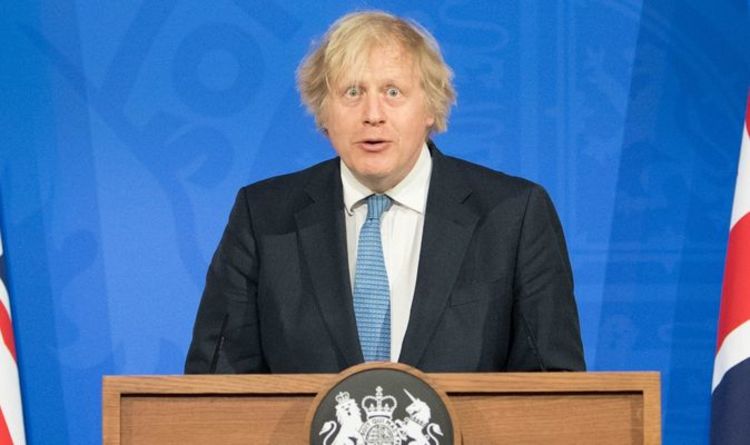 Boris Johnson has apologised for his attendance at the May 20 party, which took place when Brits were only allowed to meet with one other person outside, providing social distancing was adhered to. The Prime Minister brazenly claimed the party could “technically” fall within guidelines at the time, and refused calls from the opposition bench to resign in the face of his latest damning scandal.

Speaking at Prime Minister’s Questions today, he said: “I want to apologise. I know that millions of people across this country have made extraordinary sacrifices over the last 18 months.

He continued: “Number 10 is a big department with a garden as an extension of the office which has been in constant use because of the role of fresh air in stopping the virus.

“When I went into that garden just after six on May 20 2020, to thank groups of staff before going back into my office 25 minutes later to continue working, I believed implicitly that this was a work event.

READ MORE: ‘Boris has just wiped out his own party’ Calls for PM to resign

“I should have recognised that even if it could be said technically to fall within the guidance, there are millions and millions of people who simply would not see it that way, people who have suffered terribly, people who were forbidden from meeting loved ones at all inside or outside, and to them and to this House I offer my heartfelt apologies.”

His statement has failed to quell the wrath of the public, many of whom have cited the loss and suffering felt by millions of Brits over the last two years.

All other major political parties in the UK have called for the Prime Minister to resign immediately.

The slew of alleged parties at Number 10 over various lockdowns is now the subject of an investigation by leading Cabinet Office employee Sue Gray.

But for now, several key questions remain over what happened on May 20.

Was the party ‘within the rules’?

A quick glance at the rules in place on May 20 says the party wasn’t within the guidelines, which stated Brits could only meet with one other person from outside their household in an outdoor setting, and social distancing must be adhered to.

The Prime Minister’s former top aide turned nemesis Dominic Cummings branded his attempt to say it was within rules as “b**t”.

Mr Cummings said he had objected to the invitation because it was obviously a social event, not work.

Who else attended the party?

As the Prime Minister has confirmed he attended, it brings into question whether other Cabinet ministers could have been involved.

After suggestions were raised by Conservative MP Simon Hoare that Justice Secretary Dominic Raab attended the May 20 party, his spokesperson said: “It’s categorically untrue – he wasn’t invited and didn’t attend.”

It is likely more cabinet ministers will be facing similar probes from colleagues across the house and journalists in the coming days.

An invite list for the party has not been revealed, but it was sent to a list of around 100 people.

Why did such an invite go out?

The phrase “one rule for us, another for them” is particularly pertinent at the moment, and the scandal begs the question of why such an invite was allowed to go out in the first place.

As it was sent from the account of the principal private secretary, it seems almost impossible that the Prime Minister could not have known it was coming when it landed in his inbox – and the inbox of 100 other Downing Street employees.

Caroline Slocock, who worked in the private offices of Margaret Thatcher and John Major, told BBC Radio 4 it was “inconceivable” Mr Johnson wasn’t aware of such an invite.