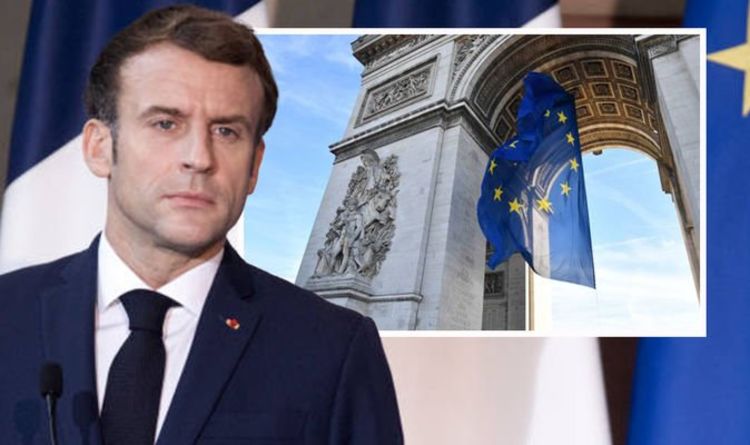 Last Saturday, France assumed control over the EU’s rotating presidency and opted to celebrate the move by displaying the institution’s flag over a number of French landmarks – including temporarily replacing France’s own “tricolore” at the Arc de Triomphe. France President Emmanuel Macron has been criticised for deciding this course of action, with rivals piling on the pressure ahead of this year’s presidential election. So, how is Mr Macron currently polling?

Over the weekend France became the latest EU member to take over its rotating six month presidency.

As a mark of celebration, landmarks including the Arc de Triomphe, Eiffel Tower and Notre-Dame Cathedral displayed the blue and gold design of the EU flag.

In the case of the Arc de Triomphe the French flag was temporarily removed and replaced with the EU’s version.

The decision prompted rivals of Mr Macron – particularly from the far-right – who will be standing in April’s presidential election to criticise him.

As a result, it was decided to take down the EU flag yesterday from the Paris monument.

Far-right leader Marine Le Pen said “replacing” the French flag at the site was an attack on the country’s identity.

In addition, she had vowed to file a complaint with the State Council – France’s highest court for administrative matters – and described the EU flag’s removal as a victory owing to pressure on the Government.

How is Mr Macron currently polling?

According to Politico, Mr Macron’s latest approval rating with the French public stood at 44 percent as of December 23, 2021.

In fact, this is the highest the figure has been since February 2018.

Meanwhile, 54 percent of the participants answered that they disapprove of the job Mr Macron is doing as French President, while two percent said that they were unsure.

Here, the number of people disapproving of Mr Macron has gradually been declining since last August, when it was rated at 59 percent.

As of today – January 3 – Mr Macron is ranked as the favourite to win this year’s presidential election.

According to the latest polls he has 25 percent of the overall vote.

His nearest challenger is the conservative candidate, Valérie Pécresse, who currently has a voting share of 17 percent.

Indeed, it remains to be seen how the events which occurred at the start of 2022 could impact public opinion of Mr Macron when opinions are gathered again.

However, a survey conducted by Politico – before the end of the New Year – demonstrated that the French public may not be influenced by the saga when they vote for their next president.

Results from this showed that the issue of “Europe” was voted as the 13th out of 21 most important issues that will determine who voters choose in the election.

Here, this issue was opted for by 13 percent of the study’s participants.

The most important subject that was voted for was “prices and purchasing power”, which 50 percent of respondents selected.