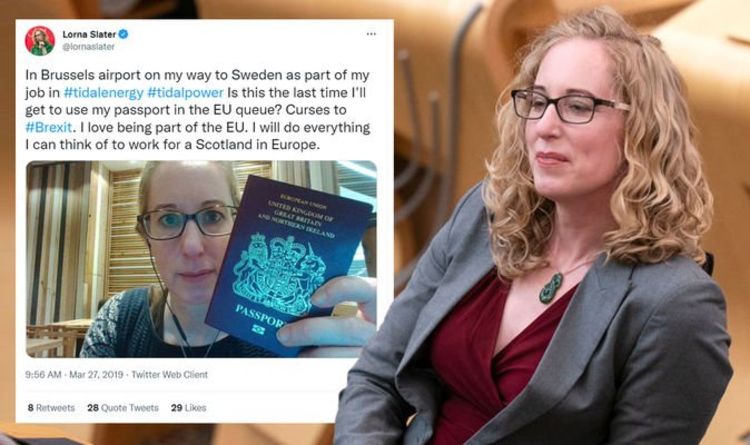 Scottish Green co-leader Lorna Slater blasted the UK Prime Minister for flying from the G20 summit in Rome to host the seminal climate change conference in Scotland’s largest city yesterday. Sharing footage of the Conservative leader arriving with wife Carrie Johnson at Glasgow, she wrote: “Well, except people who could have taken a train, but decided to fly in a private jet to the conference on how we have to stop carbon emissions… FFS

“It is possible to get from Rome to Glasgow by train, world leaders could have decided to do this. They didn’t.

“This is exactly what I mean. We need our leadership to change how they do things.”

The roughly 1,600-mile journey would take 25 hours on public transport and involve numerous changes, according to Google Maps.

Ms Slater – whose party is in a coalition with Nicola Sturgeon’s SNP in Holyrood – shared a picture of herself before she jetted off to Sweden as part of her then job as a engineering project manager for Orbital Marine Power.

She wrote: “In Brussels airport on my way to Sweden as part of my job in #tidalenergy #tidalpower.

“Is this the last time I’ll get to use my passport in the EU queue?

“Curses to #Brexit. I love being part of the EU.

DON’T MISS:
Tory Brexiteer savages Insulate Britain as they wreak havoc on roads [REACTION]
Stark warning: COP26 will end in failure [INSIGHT]
What will happen if France doesn’t back down on fishing threats? [ANALYSIS]

“I will do everything I can think of to work for a Scotland in Europe.”

Travelling from Glasgow to the Swedish capital of Stockholm is roughly the same distance as the Rome trip and would again involve numerous changes.

It would also take marginally longer at around 30 hours.

Commenting on her 2019 post this evening, user Ler.AME wrote: “Well Lorna – did you not travel by train?”

Account Morals not Murrells joked: “Flying in an aeroplane, where is this climate emergency you speak of?”

Meanwhile Stuart questioned: “What happened to save the planet?”

What do you think about Ms Slater’s tweets? Click here and tell us below.