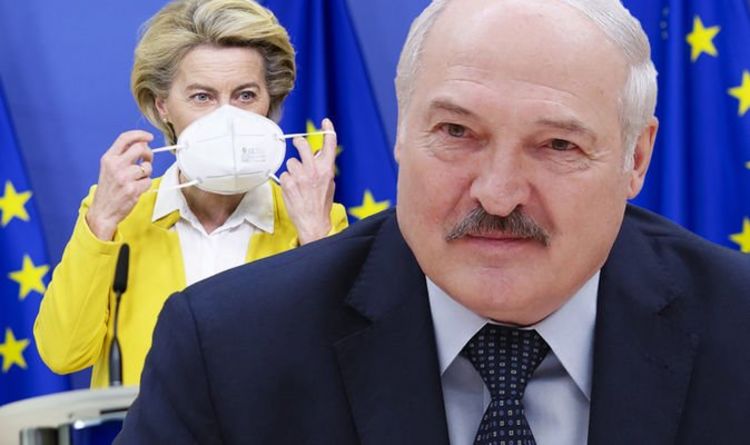 EU Commission President Ursula von der Leyen said thousands of people stranded on the European Union’s eastern border represent an attempt by Belarus to destabilise the bloc, rather than a migrant crisis, and as such call for a coordinated response.

She told the European Parliament on Tuesday that the 27-nation bloc was standing in solidarity with Poland, Lithuania and Latvia, who are bearing the brunt of what the EU says is President Alexander Lukashenko’s ploy to engineer a crisis by flying in migrants into Belarus and then pushing them across EU borders.

Mrs von der Leyen said the EU was also coordinating its response to Lukashenko’s challenge with its non-EU partners – the United States, Canada and Britain.

To deter intermediaries transporting migrants to Belarus from helping Minsk, the EU would create a blacklist of travel companies involved in trafficking and smuggling of migrants, she said.

It would provide the EU with a legal tool to suspend or limit the operations of companies, or even ban them from the EU if they were engaged in human trafficking, according to EU Commissioner Margaritis Schinas.

But according to Piper Coes, a researcher in the Eurasia Programme at the Foreign Policy Research Institute, Brussels could be doing a lot more to defuse tensions on the border.

Speaking to Express.co.uk, the Philadelphia-based expert said: “I do think that there is more to be done, because obviously, nothing that’s being done right now is quite effective as Lukashenko doesn’t seem to be taking any warnings.

“And this has been happening for months.

“This was happening in Lithuania first and Poland was a predictable second country.

“Lukashenko has completely orchestrated this entire humanitarian crisis and I think the EU should definitely be putting more sanctions on Belarus to get that type of compliance from him.”

According to the EU, over 40,000 attempts to enter the EU via the Belarus border were prevented in 2021.

The EU hit Belarus with sanctions after Lukashenko’s violent crackdown on protests against his disputed re-election last year, and Brussels earlier this month agreed to expand those to airlines, travel agencies and individuals involved in the movement of migrants.

Minsk cleared migrant camps at the border and agreed to the first repatriation flights in months last week and on Tuesday reported that about 120 migrants had left on Nov. 22 and more were due to follow.

But authorities in Warsaw said repeated incidents at the border showed Minsk may have changed tactics but had not given up plans to use migrants fleeing the Middle East and other hotspots as a weapon in the stand-off with the EU.

Border Guard spokesperson Anna Michalska said about 50 migrants tried to cross on Monday evening, with 18 briefly making it across the barbed wire barrier.

Another group of similar size gathered but ultimately gave up an attempt to cross at another location.

Polish authorities estimate about 10,000 or more migrants could be still in Belarus, he said, creating the potential for further problems.

Lukashenko, who denies the allegation that he fomented the crisis, has pressured the EU and Germany, in particular, to accept some migrants while Belarus repatriates others, a demand the bloc has so far flatly rejected.

Referring to the Belarusian dictator’s demand, Ms Coes added: “He’s going to keep making these asks so something bigger needs to be done in order to defuse this crisis.

“It’s a real issue and not much is being done currently.”

Humanitarian agencies say as many as 13 migrants have died at the border, where many have suffered in a cold, damp forest with little food or water as winter sets in.