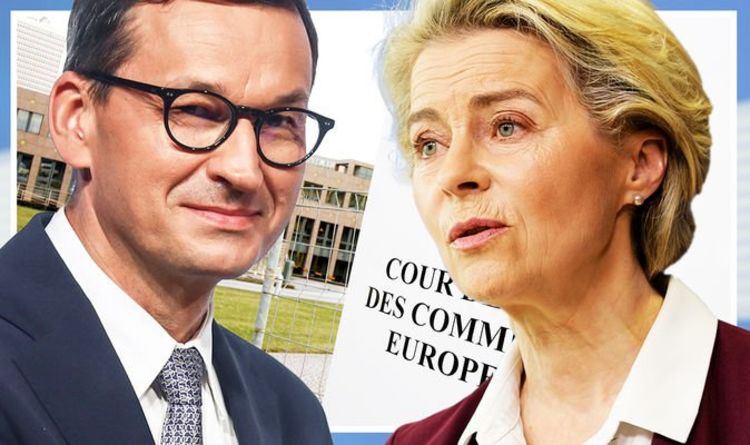 EU: Expert on fears of Poland being 'marginalised'

A trio of rulings in Warsaw and Luxembourg could have far-reaching consequences for the future of the bloc. The rulings could bring into question Poland’s EU membership as the battle between its eurosceptic government and Brussels set to reach a climax. Today, Poland’s Constitutional Tribunal, its top court, will consider whether provisions in EU law are compatible with the country’s constitution.

Tomorrow the same court will consider a separate case on whether the European Court of Justice can force Warsaw to suspend its judicial reforms.

And on Thursday, the ECJ, the EU’s top court, will rule on whether a new disciplinary regime for judges set up by the Polish government is in breach of the country’s EU treaty obligations.

The mechanism allows judges to be punished by Warsaw for a number of reasons, including the content of their rulings.

Polish officials are adamant that judicial reforms are needed to overhaul the country’s system, claiming it has not been adequately altered since the fall of communism.

And they claim the cases being heard by the tribunal are vital because the EU has allegedly grown its powers without sufficiently changing its operating treaties.

Poland’s deputy justice minister Sebastian Kaleta said: “This is not only about Poland.

“The issue is that some European officials are trying to give the EU greater competencies without changing the treaties.

“This is very dangerous, because it will implode the EU from within.”

But in Brussels, eurocrats regard the Polish cases as an attempt by Warsaw to undermine the bloc’s legal order.

There have been constant battles between the European Commission and Poland’s nationalist Law and Justice government.

He added: “If you don’t stop that, you will have more and more possibilities for different member states to challenge the primacy of EU law and the competence of the ECJ.”

As a result, Brussels is expected to trigger infringement proceedings against Poland.

Last month, the Commission launched similar action against Germany when its constitutional court ruled that the ECJ had acted beyond in remit in a case relating to the European Central Bank.

It is uncertain how Poland will react to such a decision, but previously its government has not been deterred by legal threats from Brussels.

Mr Kaleta said his government would be “obliged” not to follow ECJ orders if its constitutional court rules against the Luxembourg-based institution.

“This will be a signal for the ECJ not to act outside the competences it was given, because this breaks trust between member states, and it’s very dangerous for the EU itself,” he said.

As Mr Kaleta suggested, the result of these court showdowns could change the EU for good, or even trigger the bloc’s collapse.