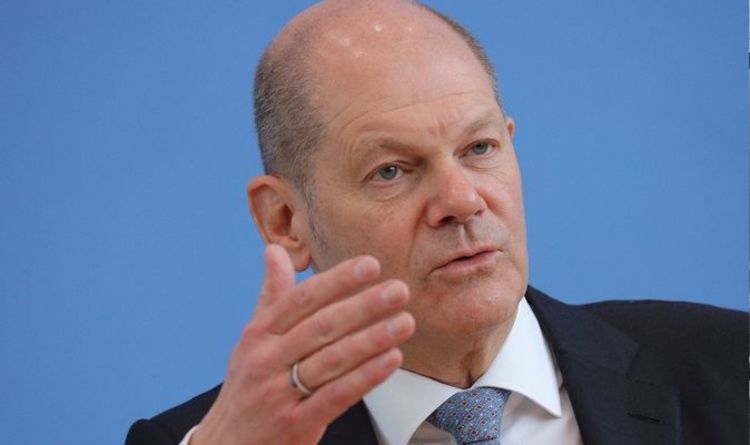 Olaf Scholz, of the Social Democratic Party, has eased ahead of his rivals in the race to succeed Angela Merkel as German Chancellor. The outgoing German leader has said she will not seek a fifth term in office after 16 years in Germany’s top job. Mr Scholz, 63, has carved out a reputation of reliability and trust ahead of Sunday’s parliamentary election. The Vice Chancellor’s two main rivals for Germany’s top job have seen their campaigns hampered by a series of gaffes and controversies.

Armin Laschet from Ms Merkel’s conservative Christian Democratic Union has closed the gap on Mr Scholz, according to recent polling.

However, his reputation may have taken too much of a battering during a campaign which saw him caught laughing during a speech by Germany’s President in a town devastated by flooding in July.

She has been accused of copyright infringement over her recent book, ‘Jetzt: Wie wir unser Land erneuern’ (Now: How We Renew Our Country), which she denied.

She also apologised for claiming she was a member of a think tank when she wasn’t, admitting that the mistake had been “sloppiness”.

By comparison, Mr Scholz has been dubbed “boring” by some German media.

The former Mayor of Hamburg told women’s magazine Brigitte: “I’m applying for Chancellor, not to be a circus ringmaster.”

However, Mr Scholz has not been afraid to wade into controversial debates in the past, including on migration within the EU.

Speaking to the Guardian in March 2016, while still Mayor of Hamburg, the politician suggested that the bloc could learn from the UK’s own stance towards migration.

He said: “It is now clear Europe is insufficiently prepared politically and legally to cope with a position where it is possible for 200 million men and women to set off and try their luck in another country.”

Mr Scholz’s city of Hamburg, which has a population of 1.8 million people, was poised to accept up to 40,000 refugees in 2016 – twice as many as Britain had agreed to accept over a five-year period at the time.

The politician referred to Britain limiting new migrants’ access to in-work benefits for up to four years.

The measure, agreed by Brussels, was secured by then-Prime Minister David Cameron ahead of the referendum on EU membership in which Britain voted to leave the bloc.

Known as the “emergency brake”, it was designed to curb the number of migrants arriving in the UK from eastern Europe.

Mr Cameron saw the measure as crucial for garnering enough support so that Britain would vote to remain in the EU.

Despite comparisons between the UK and the EU, Mr Scholz claimed that the bloc would not be able to create a single welfare system across all its member states.

He also said that even a small increase in the number of people moving between different EU nations could create serious issues.

He added: “The EU is in real difficulty if only 5-10 percent of its population should move to just a few states in search of work, with some failing to find it.”

Mr Scholz said that one solution could be to allow migrants permanent access to benefits in a country on the condition that they have worked there on at least minimum wage for a year or more.

He said: “The sensible solution lies in linking the social benefits that EU citizens receive outside of their countries of origin with the work they have performed.

“If we recognise that free movement of labour is one of the opportunities of the EU, and sometimes the best way to increase your income, it is necessary to be very careful how we organise that right.

“If we do not think about this now, in five or 10 years’ time, we may not be able to solve the problem because it has become too big and no one is willing to compromise.”