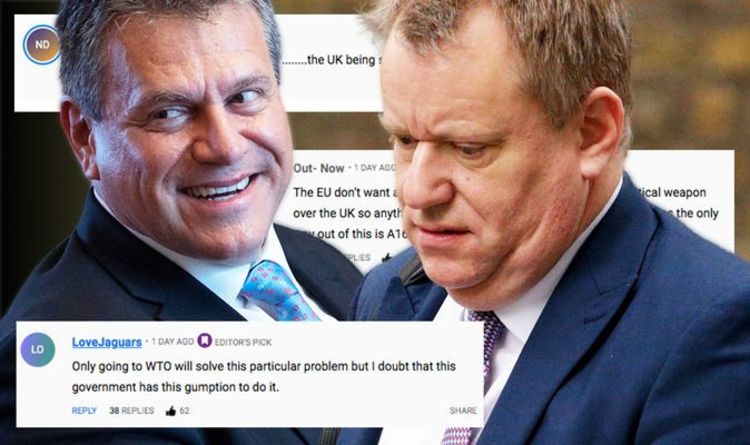 On Sunday the European Commission vice-president insisted the EU was doing “everything possible” to try and deter Britain from triggering Article 16, therefore suspending the Northern Ireland Protocol. However, Mr Sefcovic also dismissed any possibility of the bloc removing the European Court of Justice’s role as an arbiter in disputes related the Protocol, the controversial mechanism aimed at preventing a hard border on the island of Ireland.

Referring to fresh proposals by Brexit Minister Lord David Frost, Mr Marr challenged Mr Sefcovic, asking him: “What could you possibly object to?”

“They want to keep using NI as a political weapon over the UK so anything the UK puts forward the EU will try and dismiss the only way out of this is A16.”

LoveJaguars added: “Only going to WTO will solve this particular problem but I doubt that this government has this gumption to do it.

Similarly Aregulaguy said: “More EU cynical lies! They are determined to try to use NI as a weapon to punish the UK for leaving.

“This has been the policy from pretty much day one.”

He added: “The only way to deal with them is to invoke Article 16 and leave the the border to them.

“Let’s see what bright ideas they come up with then!”

Geoff Davies claimed: “They want to punish the uk to the ends of the earth.

“Never give in and our way or the highway.”

Nuno Disciple added: “What could the EU possibly object to ?……..the UK being successful!”

Mr Sefcovic told Mr Marr “political posturing and bringing new problems to the table” would not help solve the issues with the Northern Ireland Protocol.

He said that “if there is a genuine problem” with the protocol, which Unionist say has resulted in a border down the Irish Sea, ”we can find the solutions” – but stressed two sides needed to work together.

Mr Sefcovic was asked why he could not accept proposals that goods which were not going to leave Northern Ireland could be treated in one way, while goods that may cross into the Republic were handled differently.

He said: “Would the UK accept not to have the overview of what’s coming to the UK market? Would they accept it? I don’t think so.

“And you just simply have to understand that if something is coming to the EU single market that we have to have an overview.”

He said the EU had already proposed “gestures and solutions” from their side but added: “We cannot undo the Brexit, especially the type as the UK has proposed it, negotiated it, and signed the agreement up on it with us.”

He nevertheless insisted the EU was doing “everything possible” to avoid the triggering of Article 16.

He explained: “We had a change of tone in the discussions over the last week, which I really appreciate.

“Also our discussion of these practical issues like for example medicines was more constructive than before.

“So it’s a decision of the UK Government.

“We are doing everything possible to avoid it because of course, it will have serious consequences, first and foremost for the people in the Northern Ireland but also for the EU/UK relations, and therefore I want to stay on this positive term.”