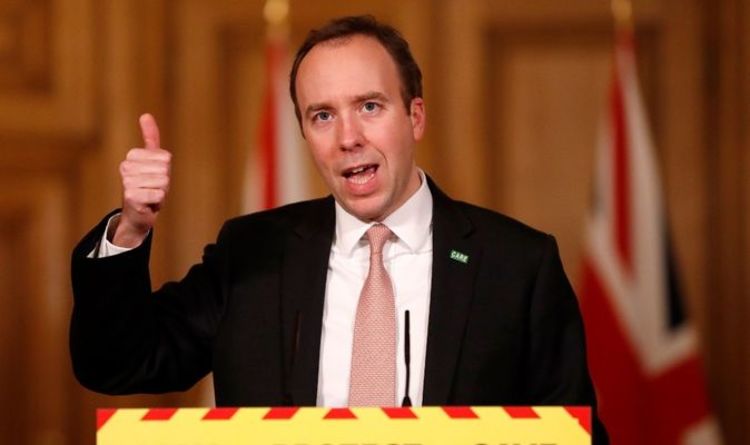 The Ex-Health Secretary, 43, made his first significant policy intervention since he left the Cabinet in June by arguing unvaccinated NHS workers should get inoculated. Writing in the Telegraph, Mr Hancock said: “Having looked at all the evidence, I am convinced that we must require vaccination for everyone who works not just in social care, but the NHS, too – and get it in place as fast as possible.”

Mr Hancock, who resigned as Health Secretary after being caught breaking social distancing rules while having an affair, also stressed how successful the vaccine roll-out has been thus far.

“The vaccine is estimated to have saved roughly 130,000 lives and is the only reason for the safe return of our liberty,” he wrote.

According to the NHS website, the UK’s state-funded healthcare system employs around 1.3million people – around nine in ten of whom have been double jabbed.

But Mr Hancock claimed while current inoculations are “wonderful”, the number is “not enough”.

“Given the proven safety and effectiveness of vaccines in saving lives, vaccination is a moral duty,” he added.

The MP for West Suffolk, who was first elected to Parliament in 2010, was still in post at the Department for Health and Social Care when the Government announced care workers were required to get jabbed to work.

However, the Telegraph reports NHS industry bodies and members of the Labour frontbench have warned Mr Hancock’s proposal could lead to NHS staff leaving in their droves over winter.

The broadsheet also revealed unvaccinated social care workers have been switching to the NHS to avoid the legal requirement, which is set to be introduced on Thursday.

But Mr Hancock challenged such an assertion.

He pointed out how similar concerns in France had been proved “unfounded”, with just 0.1 percent of workers leaving their posts.

On the other side of the Channel, the proportion of healthcare workers getting jabbed rose from two-in-three to 99 percent after vaccine mandates were introduced.

But the West Suffolk MP also challenged the argument, usually advanced by many liberty-loving MPs, that mandatory vaccinations are not the way Britain should do things.

The father-of-three pointed out how the UK already requires doctors to receive vaccinations against hepatitis B and highlighted how the UK first enforced compulsory vaccination measures back in the 1850s.

Besides historical arguments, Mr Hancock said mandatory vaccines for NHS workers would see the UK “use all the tools that we have to save lives” during what is expected to be a “difficult winter”.

He added: “If you’re still not convinced, consider this.

“Our hospitals treat thousands of people who are not just vulnerable to Covid but who have no defences at all because of the very treatment they are receiving from that hospital.

“Imagine the cancer patient, already battling another deadly disease, being cared for by a nurse.

“Who can put their hand on their heart and say they’d be happy to tell that patient their nurse could have the vaccine, but has chosen against all scientific and clinical advice to ignore it?”