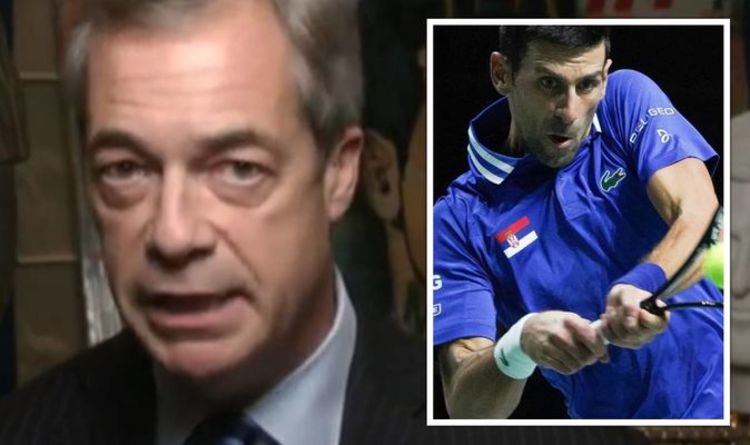 Nigel Farage hits out at response to his Djokovic row stance

Nigel Farage labelled Australia a “banana republic” after Novak Djokovic was prevented from entering the country for not providing adequate evidence of his coronavirus status. But critics of the former Brexit Party leader felt his political stance in the past was at odds with his condemnation of Australian border rules as he had previously heralded the country’s tight immigration system and had campaigned for Britain to take back control of its own borders. Mr Farage accused his “left-wing” opponents of misunderstanding his position and said the issue was “not about borders” but about “big government bullying people”.

Speaking on GB News, Mr Farage presented his late-night show from Belgrade, Serbia, where he spoke with Mr Djokovic’s family following the overturning of the tennis star’s visa cancellation.

Mr Farage discussed the story and said: “Here’s what it’s not, there are some out there, particularly on the left, who are busy on Twitter saying: ‘What is Nigel Farage doing, I thought he believed in border controls?

“‘I thought he believed in an Australian-style points system?’

“Well, yes, I do believe in proper border controls, I do believe that you shouldn’t have an open door [system], here is the point, this is not about borders.

JUST IN: Novak Djokovic returns to tennis court ahead of Australian Open

“And increasingly, we’re seeing a level of intolerance to those who have chosen not to have the vaccine and that is moving to a level that I find frankly disturbing.”

Mr Farage made clear he was not an “anti-vaxxer” despite his critics wishing to paint him as one and said Mr Djokovic was following the rules when he was given a medical exemption to attend the Australian Open in Victoria.

The GB News presenter then said Australian Prime Minister Scott Morrison had made a “catastrophic error” with his border rules and criticised governments forcing people to take vaccines.

Mr Farage was routinely attacked for his stance on the subject, with British tennis star Sir Andy Murray joining in on the attack.

The former MEP tweeted a video of him visiting the Djokovic family’s trophy room with Sir Andy replying: “Please record the awkward moment when you tell them you’ve spent most of your career campaigning to have people from eastern Europe deported.”

Mr Farage replied: “Dear Andy, you clearly don’t understand politics or the Brexit campaign but are filled with prejudice. Concentrate on the tennis and, a word of advice, crack a smile every now and again.”

Mr Farage has long campaigned for the UK to have a stricter border system and has repeatedly praised Australia for its point-based structure.

He tweeted in 2016: “Clear now for sake of our national security as well as for social cohesion that we must Leave EU & have Australian-style immigration system.”

Mr Djokovic was denied entry to Australia on Wednesday after border forces said he did not provide “adequate evidence” of his coronavirus status.

Australian rules state people can enter the country if they are fully vaccinated or can prove they have a medical exemption.

Victoria State has mandated all players, fans and staff must be fully vaccinated if they wish to attend.

Mr Djokovic claimed he was given an exemption from both Victoria state and Tennis Australia and appealed the decision – which was overturned on Monday.