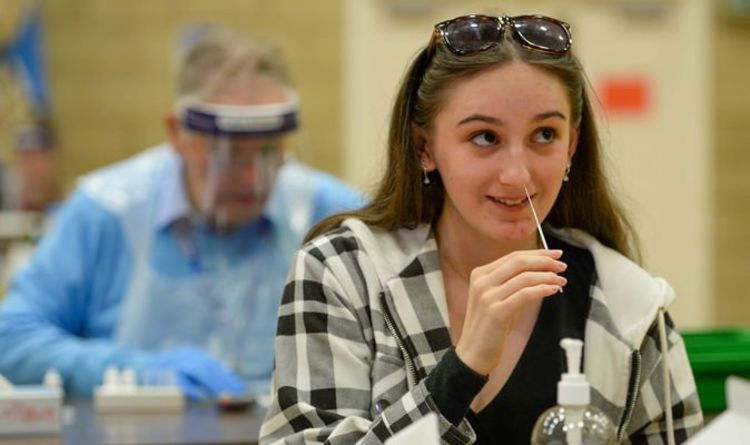 Staff and pupils are also being urged to self-test at home. The strict measures come after the Government announced that face masks must be worn in classrooms in England’s secondary schools. Students returning to university have also been advised to test before they travel back to campus.

Secondary, college and university students and education staff and early years staff should continue to test themselves twice a week.

Ministers are also urging 12 to 15 year olds to get fully vaccinated (two doses) against Covid-19 while 16 and 17 year olds and university students are being asked to get booster jabs.

Education Secretary Nadhim Zahawi said: “Being in face-to-face learning is undoubtedly the very best place for children and young people’s education and wellbeing, and my priority remains on keeping early years settings, schools, colleges and universities open so that face-to-face education can continue.

“The very best way we can continue to protect ourselves and our families is by getting the booster – or second jab if you are aged 12 to 15 – as soon as possible. I urge anyone who hasn’t done this to do so now.”

Health Secretary Sajid Javid said: “We are doing all we can to minimise disruption this virus causes to everyday life, including keeping children in school, and regular testing is a key way to support schools and protect face-to-face teaching.

“Vaccines remain our greatest line of defence so I urge all 12 to 15 year olds who have not come forward yet to get vaccinated, and all teachers to get boosted now to protect yourself and those around you.”

Meanwhile, six school staff unions have issued a demand for urgent action to limit the spread of the virus.

They warned that national exams would be put at risk without further measures. And they called for air-cleaning units, financial support for absence cover, help with on-site testing and a relaxation of the Ofsted inspection regime.

Until now, England was the only one of the four UK nations where face masks were not recommended for pupils in classrooms. Teachers will not have to wear them.

Some individual schools and local authorities in England had already required masks in classrooms, and face coverings were recommended in schools in England between March 8 and May 17 last year.

Mr Zahawi said face coverings would be required until January 26. This is when the current national Plan B Covid measures run out, although they will be reviewed from tomorrow.

The Government also said it would be making 7,000 air-cleaning units available to early years settings, schools and colleges.

There are more than 24,400 schools in England, according to the latest Government figures, but the Department for Education said the units would only be required in some areas of schools where opening doors and windows was not effective.

Staff absences and rising Covid rates at the end of last term – caused by the rapid spread of the Omicron variant – have led to fears of further disruption to education.

The four main teaching unions covering England, Wales and Northern Ireland – ASCL, NAHT, NEU and NASUWT – plus the GMB and Unison, have issued a joint statement calling for urgent help.

It said schools needed to avoid exam disruption for a third successive year, and remove uncertainty and additional workloads for students and teachers.

Labour’s shadow health secretary Wes Streeting said that while he did not think anyone would be “over the moon” about masks being worn in schools, it was better than children missing out on learning.

But Conservative MP Robert Halfon, chair of the Commons education select committee, said he had worries about the mask policy, telling the BBC that the children’s minister had told his committee “there was no evidence of the efficacy of mask wearing”.

He said he wanted Mr Zahawi to set out the evidence behind the policy.