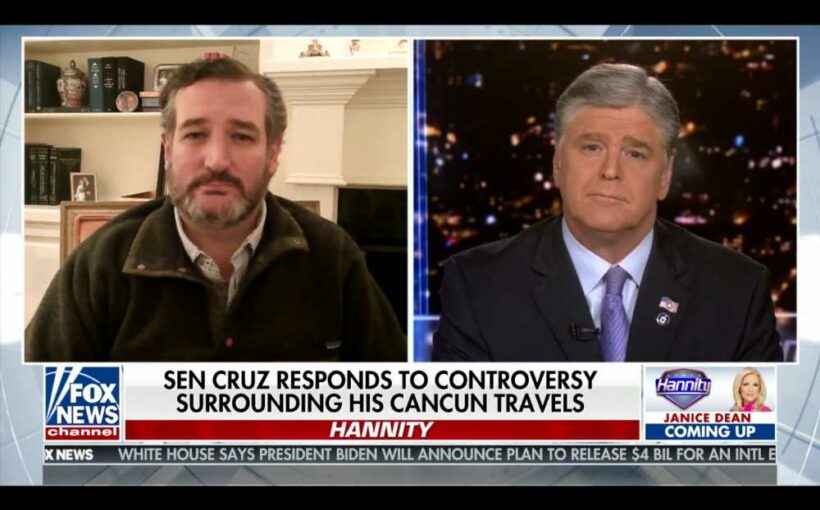 Sen. Ted Cruz (R-Texas) tried to do some damage control after making a trip to Mexico with his family while the people in his state are suffering from the aftermath of the historic storm that has left hundreds of thousands without power.

After receiving backlash all day Thursday, Cruz backtracked on his initial excuse that he’d planned all along to accompany his kids to Cancun to “drop them off” and return home. But Cruz later admitted that the public uproar caused him to leave his family in Cancun and return to Texas.

Later Thursday night, during an interview with Fox’s Sean Hannity, the host either wasn’t aware of Cruz’s about-face or did not care.

“You went and you took your daughters to Cancun and you came back,” Hannity said. “I think you can be a father and be the senator of Texas all at the same time and make a round-trip, quick drop-off, quick trip, and come home.”

But as the Daily Beast’s Justin Baragona pointed out, not only had Cruz already admitted his initial statement was not true, but the New York Times had also published text messages from Cruz’s wife Heidi that showed the planned trip was set for the entire family to stay through the weekend.

Cruz didn’t directly correct Hannity’s line of bullshit, but he did say what he now admits is the truth.

“I had initially planned to stay through the weekend, but as I was heading down there, you know, I started to have second thoughts almost immediately because the crisis here in Texas, you need to be here on the ground,” the senator said.

Cruz is infamous for scolding others in power for what he deems is improper behavior during a crisis. The Daily Show put together a devastating mashup that shows the unlimited hypocrisy Cruz can muster up.