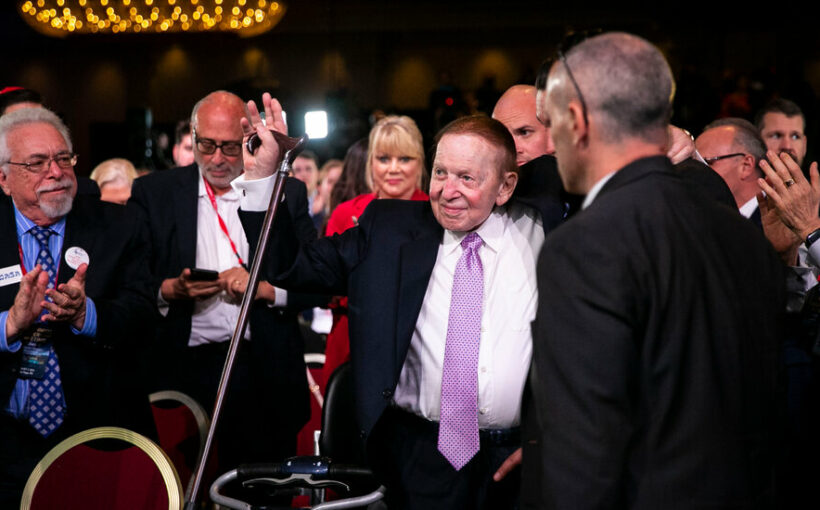 The death of Sheldon G. Adelson, the casino magnate who used his vast fortune to tip the balance of power in Washington over the last decade by helping Republicans take control of the House, the Senate and eventually the White House, adds another element of uncertainty for the party as it faces a bitter reckoning over President Trump’s legacy.

Already, the fallout over the deadly siege on the Capitol by Trump supporters last week has hit the Republican Party financially, with several blue chip corporations like Marriott and Blue Cross Blue Shield announcing that they will suspend donations to members of Congress who supported Mr. Trump’s efforts to overturn President-elect Joseph R. Biden Jr.’s victory.

And while it seems likely that Mr. Adelson’s wife, Dr. Miriam Adelson, will continue with some of their family’s political giving, his passing Monday night at the age of 87 leaves Republicans without a benefactor whose donations were so crucial to the party’s success that only a small number of billionaires, like Charles Koch, rivaled his influence.

All told, Mr. Adelson and his wife have donated more than a half-billion dollars to G.O.P. campaigns and super PACs since 2010, according to federal records.

His absence could further complicate Republican efforts in 2022 to regain power in Congress, where they will be in the minority in both chambers once the results of the Georgia Senate runoff are formally certified later this month and Mr. Biden is inaugurated.

“The corporate giving backlash, along with the tragic passing of Sheldon Adelson, leaves a real void in the fund-raising plans for the 2022 cycle,” said Scott Reed, a veteran Republican strategist who has worked with the Adelsons and other major G.O.P. financiers.

Part of the concern for Republicans, Mr. Reed added, is that the Adelsons have been so singular a force in the party that there is no replacement. “A next generation of Sheldon-level giving does not readily exist,” he said.

The 2020 cycle was the biggest yet for the Adelsons. Together they gave about $217 million, with the largest portion, $90 million, going to a super PAC that supported President Trump’s re-election. They donated another $70 million to the Senate Leadership Fund, which was devoted to maintaining Republican control of the Senate, and $50 million to the main House Republican super PAC.

Senator Roy Blunt, Republican of Missouri, called Mr. Adelson “a force of nature” in a statement following the announcement of his death, which was caused by complications of non-Hodgkin’s lymphoma, his company, Las Vegas Sands, said.

While Mr. Adelson funded Republican candidates, one prominent Democrat, former Senator Harry Reid of Nevada, praised him as a businessman who was “instrumental in transforming Las Vegas into the iconic destination it is today.”

Mr. Adelson was also a major supporter of Israeli causes, and Dr. Adelson, who was born in Israel and was the driving force behind the family’s involvement in conservative Israeli politics, is expected to remain active as the publisher of the free daily newspaper Israel Hayom. “Miriam will continue to make every decision that she makes as though he’s by her side,” said one person who knows the Adelsons and spoke on the condition of anonymity because the family is in mourning.

In the United States, the couple was a key source of support for the Republican Jewish Coalition, which remained a close ally of Mr. Trump throughout the course of his turbulent presidency. The Adelsons were among those who helped convince Mr. Trump to adopt a hard-line pro-Israel stance, which led to his decision in 2017 to relocate the American embassy from Tel Aviv to Jerusalem — a move that incensed Palestinians and led to unrest across the Middle East.

The couple was seated in the front row for the ribbon-cutting ceremony commemorating the move in May 2018. That day, Dr. Adelson described Mr. Trump as “the Truman of our time” in an extraordinary front-page editorial in The Las Vegas Review-Journal, which she and her husband had purchased in 2016.

His huge spending changed the contours of the battles for the Senate and House, as well as past Republican presidential nominating contests. In 2012, he funded a super PAC supporting Newt Gingrich that bloodied the eventual nominee, Mitt Romney, and gave Mr. Gingrich’s often quixotic campaign a longer shelf life than many expected it to have. But in the general election, the Adelsons invested millions more in another super PAC that aimed to help Mr. Romney defeat President Barack Obama.

For years, top Republicans sought Mr. Adelson’s approval and cash. In the 2016 presidential primary, Mr. Trump attacked his fellow Republicans for pursuing Mr. Adelson, in particular Senator Marco Rubio of Florida. “Sheldon Adelson is looking to give big dollars to Rubio because he feels he can mold him into his perfect little puppet. I agree!” Mr. Trump wrote on Twitter in October 2015.

Their relationship evolved over time. Once Mr. Trump became the apparent Republican nominee and the party started to unify around his renegade candidacy, Mr. Adelson agreed to back him.

After Mr. Trump’s election in 2016, Dr. Adelson wept tears of joy over his promises to support Israel. At a meeting in January 2017 at Trump Tower in which Mr. Trump promised he would move the embassy to Jerusalem, she exclaimed, “I can’t believe it!” and hugged the president-elect, according to one person who witnessed the exchange.

In November 2018, Mr. Trump bestowed the Presidential Medal of Freedom on Dr. Adelson. The Adelsons had just spent more than $120 million boosting Republicans in the midterms.