Home » Politics » How to Watch the Second Trump Impeachment Vote 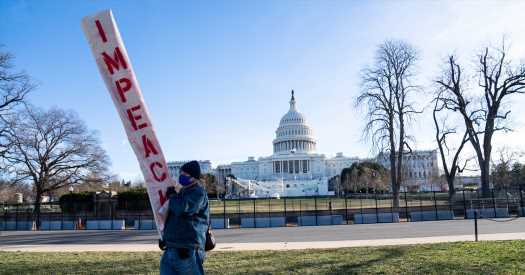 The House will convene on Wednesday to debate and vote on whether to charge President Trump with “inciting violence against the government of the United States,” advancing an effort to impeach him for the second time in fewer than 13 months.

The decision to move ahead with the vote comes after Vice President Mike Pence declined on Tuesday, in a letter sent to Speaker Nancy Pelosi, to strip the president of his powers using the 25th Amendment.

The article of impeachment that Democrats introduced on Monday aims to hold Mr. Trump responsible for his role in inflaming a mob of his supporters who stormed the Capitol last week, killing a Capitol Police officer, raiding lawmakers’ offices and stealing federal property. More tangibly, it also invokes the 14th Amendment, potentially prohibiting Mr. Trump from holding office in the future if he is ultimately convicted by the Senate.

Members of the House will gather at 9 a.m. to begin debate on the impeachment resolution.

Here is how to follow the debate and what to watch for:

The impeachment proceedings can be streamed online on several platforms, including the House clerk’s website, C-SPAN and YouTube. The New York Times will also provide video of the hearing with live analysis from reporters beginning at 9 a.m.

Those watching on television can find the proceedings broadcast in full on several networks, including CNN and PBS.

What to Watch For

Democrats appear to have more than enough support to vote to impeach Mr. Trump. But the breakneck pace at which they have raced to move ahead with the vote has left some Republican lawmakers prevaricating and proposing alternate solutions, like a bipartisan measure to censure the president.

Multiple House Republicans, including Representatives John Katko of New York and Liz Cheney of Wyoming, the party’s No. 3 in the chamber, have said that they would join Democrats in support of impeachment. Several more who have not publicly discussed their stances are expected to do the same on Wednesday.

Still, the vast majority of Republicans are expected to vote against impeaching Mr. Trump. Top Republicans, like Representative Kevin McCarthy of California, the minority leader, have even publicly criticized the coming vote.

But unlike the last impeachment, in which Republicans were united in their opposition, the debate on Wednesday may reveal simmering divisions in the party as lawmakers on both sides have privately seethed about the president’s conduct both before and after the riot at the Capitol. The debate should reveal how willing Republicans are to publicly state those views.

Should the House vote to impeach Mr. Trump as expected, attention will turn to the Senate, which could begin a trial as early as next week.

From Riot to Impeachment

The riot inside the U.S. Capitol on Wednesday, Jan. 6, followed a rally at which President Trump made an inflammatory speech to his supporters, questioning the results of the election. Here’s a look at what happened and at the ongoing fallout: