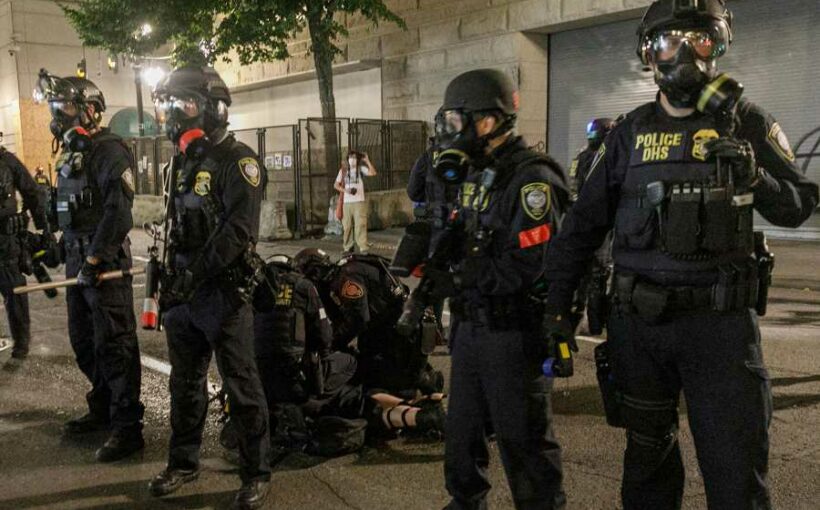 A protester who was snatched off the street by camouflaged government agents and shoved into an unmarked minivan during the federal crackdown on Black Lives Matter demonstrations in Portland has filed a lawsuit claiming her core constitutional rights were violated.

In mid-July 2020, Evelyn Bassi got swept up in one of the darkest episodes of the Trump administration when she was grabbed by armed federal agents, detained in a van against her will, and frisked before ultimately being let go. Her new lawsuit claims that her “illegal abduction” was feature of a “terror campaign against Portlanders” orchestrated by then-President Trump, intended to “intimidate the public and chill free speech.”

Trump Endorsed Her. Now She Wants to Use State Power to 'Crush' the Left and Impose 'God's Moral Order'

RS Recommends: 5 Devices You Need to Set Up Your Smart Home

She is seeking compensatory and punitive damages.

In the aftermath of the murder of George Floyd in late May 2020, Portland transformed into a hotbed of nightly protests. Black Lives Matter demonstrations against police violence were countered, ironically, by wave after wave of police violence.

The images of civil unrest — which included the toppling of statues of George Washington and Thomas Jefferson — offered Trump an opening for a “law and order” crackdown. The Department of Homeland Security launched “Operation Diligent Valor” in Portland in late June.

The ostensible purpose of deploying armed DHS agents to Oregon’s largest city was to protect a downtown federal courthouse. But the effect of the arrival of feds from agencies like the Border Patrol and ICE was to inflame the protests, and turn the barricades around the courthouse into a flash-point where rowdy activists were countered by federal fusillades of tear gas and less-lethal weapons. (Chaotic images of this violence later featured prominently in Trump’s reelection campaign ads.)

The federal officers — many of whom a federal investigation later found were ill-equipped and lacked proper crowd-control training — did not limit their activities to federal property. On several occasions, federal officers driving in unmarked minivans snatched protesters off city streets, taking them into custody with murky legal justification.

As described in the court filing, Bassi’s ordeal began not long after midnight, in the early morning of July 15, 2020. She’d finished protesting and was starting to head home from downtown when an unmarked, dark gray Dodge minivan with tinted windows pulled up beside her and a companion.

The vehicle occupants opened the passenger-side doors and Bassi could see they were dressed “in camouflage fatigues” and carried sidearms. The men didn’t identify themselves and Bassi didn’t know if they were law enforcement or local vigilantes, but she threw up her hands and told the men she was leaving.

Splitting off from her friend, Bassi attempted to run away from the minivan, which doubled back to intercept her. A pair of camouflaged officers with yellow patches reading “POLICE” leaped out of the van, detained Bassi, and shoved her into the vehicle, ordering her to sit cross-legged on the floor, with “her hands on her helmet and her head down.”

The officers still did not identify themselves. “They appeared to be soldiers in a warzone,” the complaint reads, adding that Bassi feared for her life. She did “not know if she was ever going to be seen again by her family and friends,” the filing reads. “She worried she would never see her son again.”

After driving erratically around downtown for nearly 10 minutes, the van pulled over. The agents ordered Bassi out of the van, the claim contends, and Bassi was told to put her hands on the roof, after which she was frisked. The officers peppered her with questions about whether she had a laser pointer. (She did not.)

The street-snatching appeared to have been motivated by a case of mistaken identity. An officer finally informed her, “You’re being detained because you match the description of somebody who committed a federal crime against an officer.”

But the person the officers were ostensibly looking for was a man with blond hair. Bassi is a trans woman with brown hair. “That’s not him,” an officer said after removing Bassi’s helmet. The agents soon left Bassi on the street in a state of shock, and then drove off after warning, “You know, bro, we have cameras everywhere.”

Bassi’s complaint describes her as traumatized by the event — losing sleep, vomiting, and struggling to work. She has a PTSD diagnosis and “still struggles to sleep more than 3 hours a night,” the filing states.

The legal claim is filed against the still-unknown agents who abducted Bassi, as well of dozens of other officers and leaders in the DHS chain of command who authorized or oversaw or participated in the illicit federal detentions of protesters.

The suit claims that the Trump administration was targeting demonstrators not with any valid law enforcement purpose, and instead practicing “enforced disappearance” — a crime under international law that is more familiar in authoritarian regimes.

It quotes a definition from Amnesty International that describes enforced disappearance as a strategy intended to inspire feelings of “insecurity and fear” not only among those individuals affected, but across an entire community. “Defendants targeted Plaintiff for arrest not because they had probable cause, but because they wanted to sow terror,” the complaint insists, “and suppress protected speech rights.”

Read the full complaint embedded below:

View this document on Scribd