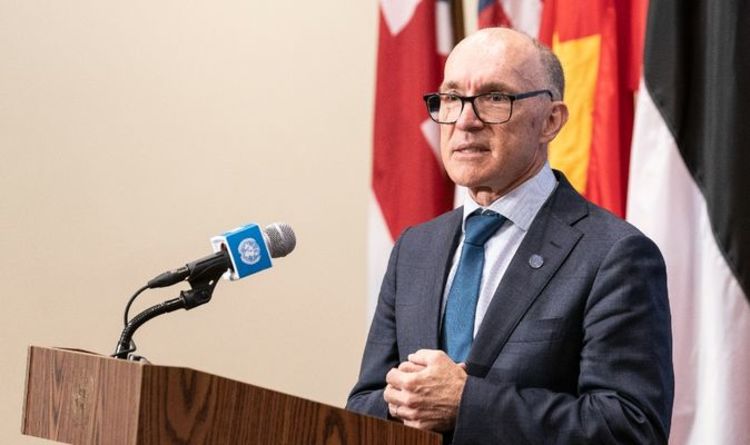 Speaking on BBC Radio 4’s Today Programme this morning, Thomas Byrne said that the danger of “complete instability” in the country is “serious”. While the EU appears to have listened to the concerns of Northern Ireland and is in “solutions mode”, he questioned Britain’s “tough guy approach”.

This comes after the UK threatened to implement Article 16 if talks break down, with the UK calling it the “only option” in that event.

Mr Byrne said: “A tough approach, or a tough guy approach, when it comes to Northern Ireland can only be counter-productive and will lead to disaster.”

He said that the two countries have ensured stability by working together for decades, but that there is now a “division”.

He said: “We now have a division, it seems, because of threats by the British Government to, what they say, is to suspend the protocol under Article 16. We’re not entirely clear what that’s about.”

“I don’t think that the people who are burning buses in Northern Ireland at the moment… are fully aware of all of the details and the intricacies of the protocol.

“What they need to see, and what people in Northern Ireland need to see, is both governments working together.”

Asked about the possibility of a full-scale trade war, the minister said: “There is a serious danger of complete instability in Northern Ireland and that’s what motivates the Irish Government in all of our dealings in relation to the protocol.”

Lord Frost and his counterpart in Brussels, Maros Sefocic were expected to meet on Friday for the fourth time in a bid to renegotiate the protocol.

They will assess whether any progress has been made in negotiations on the Northern Ireland Protocol.

Earlier this week, Ireland’s deputy prime minister Leo Varadkar said that the EU would be likely to suspend the EU-UK trade deal should the UK trigger Article 16.

He claimed that this would “undo” the Brexit deal and precipitate a collapse in relations with the EU.

Speaking to RTE News at One, he said: “I don’t think anybody wants to see the European Union suspending the trade and cooperation agreement with Britain.

“But if Britain were to act in such a way that it was resigning from the protocol, resigning from the withdrawal agreement, I think the European Union would have no option other than to introduce what we call rebalancing measures to respond.”

However, on Thursday, speaking about Article 16, Chancellor Rishi Sunak described it as a “safety mechanism”, adding that the UK was “not at that point”.

He added: “And what we should be doing and what we are doing is working constructively with European friends and partners to explore every opportunity that we have to try and resolve some of our differences around the operation of their protocol.

“That’s very much our priority.”

Speaking about the negotiations, Mr Šefčovič said this week would be “an important one”.