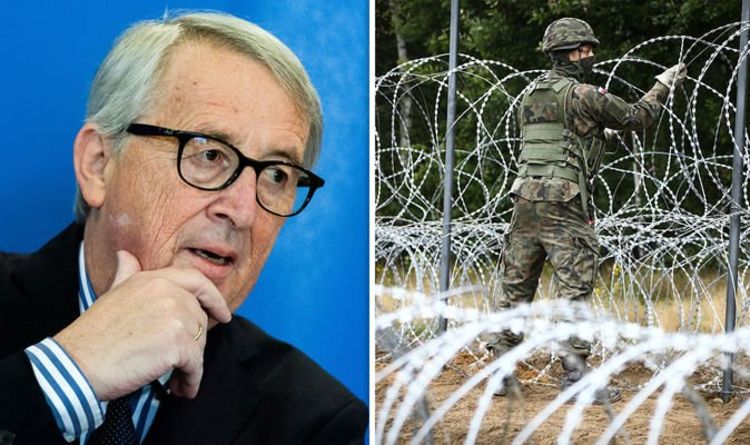 As the crisis in Afghanistan rapidly escalated in the last few weeks, EU leaders tried once again to push for the creation of a European Army. Joseph Borrell, the EU’s foreign policy chief, claimed the fall of Kabul perfectly demonstrates why the bloc needs its own armed forces. Belgian MEP and former European Parliament’s Brexit representative Guy Verhofstadt also took to Twitter to say that an EU army “is common sense”.

Max Bergmann, a senior fellow at the Center for American Progress, insisted “the tragic turn of events in Afghanistan should serve as a wake-up call for the European Union”.

He argued the bloc cannot count on the US anymore.

He wrote: “The Continent’s leaders didn’t have the means to insert forces in Afghanistan even if they wanted to do so, exposing not just the failures of two decades of US and NATO efforts but also the failure of the alliance’s post-9/11 approach to European defence.”

The idea of creating a European army in order to “liberate” Europe from US influence has been floated before by former President of the European Commission Jean-Claude Juncker, according to Mateusz Piskorski, head of the European Center for Geopolitical Analysis (ECAG).

In 2015, Mr Piskorsk claimed the proposals put forward by Mr Juncker were “anti-American” and were aimed to make Europe more independent and lessen the influence of the US on the EU.

Mr Piskorski is known for his controversial views and visits to Crimea to support Russia’s 2014 annexation of the peninsula from Ukraine.

His colleagues at ECAG are known in Poland for promoting Eurasianism, a pan-Slavic movement popularised by Russian political scientist Alexandr Dugin that advances the idea of a conservative “Eurasian” civilisation anchored by Russia.

Mr Piskorski said it was not the first time the idea of an EU Army had been floated, and noted it reflected a lack of understanding between Washington and Brussels.

He said: “I think when it comes to the idea of common European defence policies, it’s an old idea, and it comes out every time there are any disagreements between the United States and the European Union.

“Last time we heard about this idea was in 2003-2004 during the war in Iraq and the US aggression in Iraq.”

The call to create a joint European army was proposed by Mr Juncker five years ago, and he said it was needed for the EU to combat the perceived Russian threat and “convey to Russia that we are serious about defending the values of the European Union”.

The EU chief argued that NATO was not a satisfactory military defence for the EU, considering that not all EU members were members of NATO.

While Mr Juncker clearly stated the creation of such an army would be to counter the tension between Brussels and Moscow, but Mr Piskorski said he believed it would work towards establishing greater European independence from the US.

He explained: “So, I think regardless of the anti-Russian rhetoric of Jean Claude Juncker, who is, of course, convincing everyone that such a project would be directed against Russia, or against a possible Russian threat, practically, this idea would be a kind of liberation from the point of view of Europe… Because we have already seen some comments from American experts and US politicians who are convincing the Europeans that NATO is enough and that they shouldn’t care about other security structures other than NATO.

“So it’s a kind of paradox because, on the one hand, Juncker tries to be politically correct and is convincing everyone that we need protection from Russia, while on the other hand, the very essence and idea of this project would be quite anti-American, or would also be directed against the American military presence in Europe.”

He added: ”NATO is an instrument of American influence in Germany and the EU. It’s the instrument that allows the US to fulfil its agenda in Europe.

“A united EU Army would question the dominant positions of the US within NATO.”

Brexiteers have been warning for decades about the prospect of a European army being formed by the ever-more integrating Brussels bloc.

On January 31, on the day the UK finally freed itself from the bloc, European Parliament President David Sassoli confirmed such a project may indeed come to fruition very soon.

Mr Sassoli stressed the importance of member states uniting against security challenges and claimed he would not exclude the possibility of a European army being created soon.

He told Italy’s Radio 24: “It’s not a given that in the coming future we won’t have something that resembles a European army.

“Because today’s security issues force more and more member states to work together.

“But Europe has pledged a fundamental thing. We said ‘never again’ to war. So our army will never serve as a war instrument but rather as a support to the international community.

“We wanted a Europe that was a field of countries betting on peace, not on military activities.”