Since taking office last January, Vice President Kamala Harris has traveled to a half-dozen nations, visited multiple U.S. cities and states and taken repeated trips to her home state of California – including this Christmas weekend.

But in a pre-recorded interview set to air Sunday, Harris identified “to not get out of D.C. more” as her “biggest failure” since taking office.

Harris made the remark to Margaret Brennan of CBS News, who spoke with Harris for this weekend’s edition of “Face the Nation.”

“What do you think, as you come to the end of this first year, what do you think your biggest failure has been at this point?” Brennan asks, in a preview clip from the interview that “Face the Nation” posted online.

Harris laughs and then responds: “To not get out of D.C. more.”

“I mean, and I actually mean that sincerely for a number of reasons,” Harris continues. “You know, I, we, the president and I came in, you know, COVID had already started. It was, the pandemic had started. And when we came in we really couldn’t travel.

“You know, a large part of the relationship that he and I have built has been being in this, you know, together in the same office for hours on end, doing Zooms or whatever because we couldn’t get out of D.C., and on issues that are about fighting for anything from voting rights to child care, to one of the issues that I care deeply about, maternal health.

“Being with the people who are directly impacted by this work, listening to them so that they, not some pundit, tells us what their priorities are. I think it’s critically important.”

“People are, people have a right to know and believe that their government actually sees and hears them. And my biggest concern is, I don’t ever want to be in a bubble when it comes to being aware of and in touch with what people need at any given moment in time.”

“People have a right to know and believe that their government actually sees and hears them. And my biggest concern is, I don’t ever want to be in a bubble.”

Ironically, the vice president’s critics – who include both Republican and Democrat lawmakers – have accused Harris of being in a bubble when it comes to the U.S.-Mexico border. 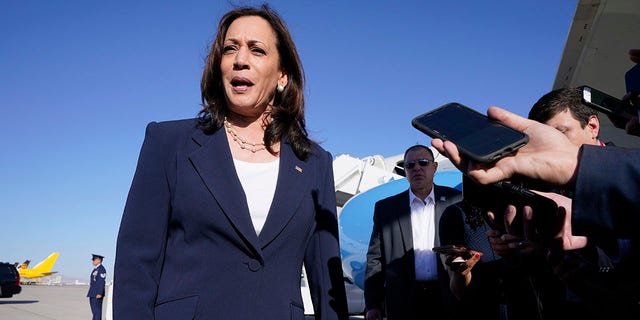 Vice President Kamala Harris talks to reporters after stepping off Air Force Two, Friday, June 25, 2021, on arrival to El Paso, Texas. She hasn’t returned to the U.S.-Mexico border region since then.
(Associated Press)

Since March, when President Biden named Harris his point person on the migrant crisis, Harris has visited the border region just once – in June when she spent a few hours in El Paso, Texas, before flying on to her Los Angeles mansion for the rest of that weekend.

She then returned to Los Angeles the very next weekend to celebrate July 4, and has made other visits to California – including a mysterious visit to Palm Springs in October — but has yet to make a second visit to the border.

“She was tasked with that job, it doesn’t look like she’s very interested in this,” U.S. Rep. Henry Cuellar, a Democrat who represents a border-area district in Texas, told The New York Times this week, “so we are going to move on to other folks that work on this issue.”

“It doesn’t look like she’s very interested in this, so we are going to move on to other folks that work on this issue.” 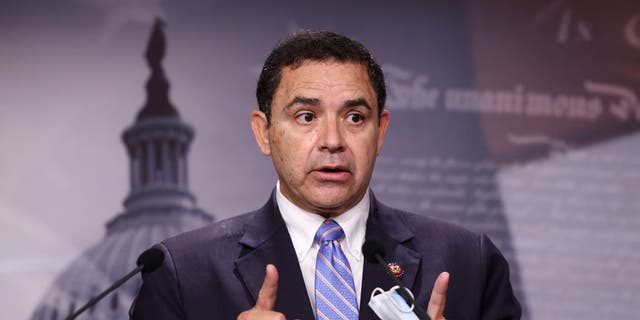 Harris’ other trips out of D.C. have included visits to Guatemala and Mexico in June, to discuss the “root causes” of the migrant crisis; stops in Vietnam and Singapore (and briefly in Japan) in August, to show support for the U.S. allies as they deal with China; and a trip to France in November as the Biden administration sought to mend its relationship with the European nation after France was left out of a U.S.-U.K.-Australia deal on submarine technology.

The vice president’s domestic trips – either to stump for Democratic candidates or to seek support for Biden administration policies — have included stops in Las Vegas, Chicago, Charlotte, the San Francisco Bay Area and Newark, New Jersey – which she visited in October on the same day that other top Biden administration officials were in Mexico City for a high-level meeting about border issues.

In another “Face the Nation” preview clip, Harris discusses what she sees as her “biggest accomplishment” since taking office.

“When I go to an event, whatever it is, and some dad or some mom brings their kids — daughters, sons – and says ‘That’s your vice president,’ and challenges their kids to think about who does what, as a way, I think, of empowering their kids to know they can do anything they want – not be confined by who has traditionally done what – I think that is, that’s one of the things I, that gives me joy, is to know that, that might be a possible impact.”

On Friday, second gentleman Douglas Emhoff posted photos from California, where he and Harris visited with first responders and other first-line workers on Christmas Eve. Harris and Emhoff also met with California firefighters during their July 4 weekend stay in the Golden State.