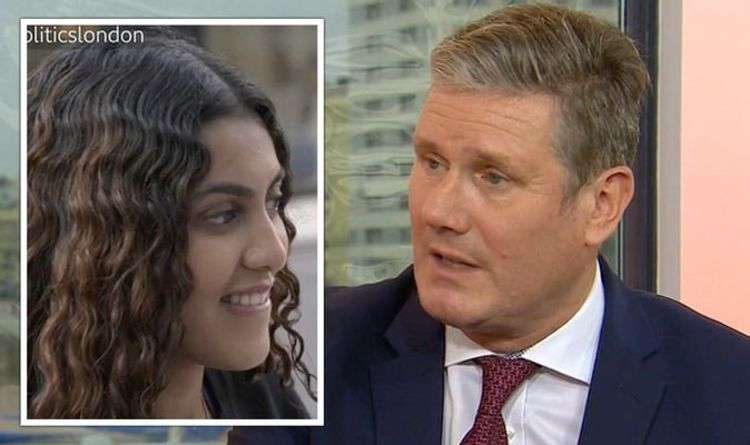 Sir Keir Starmer has faced claims of failing to make a mark among voters since his election as leader of the Labour Party in April 2020. BBC London tested the ability of Londoners to identify Sir Keir with a game of “Name the politician”, walking around the Capital with a photo of the leader and asking passersby who he was. While some had a vague idea about his identity, with some struggling to actually remember his name, others outright failed to say who he is.

A young woman said, “No, I’m not sure who that is,” and when asked whether she wanted to guess, she said: “No, I’d probably embarrass myself.”

JUST IN: State pension forecast to increase by £300 a year after triple lock scrap

A teenage girl replied to the challenge saying: “The one with the strange name. Kid Starmer or something?”

And one man confidently said, “that’s Keave Starmer” before being corrected.

The Labour leader appeared on The Andrew Marr Show on Sunday to discuss his policy proposals ahead of his keynote speech at the Labour Party Conference in Brighton on Wednesday.

Angela Rayner jokes about 'being muted' at Labour Party Conference

“Now, I know a lot of it has been during the pandemic, but why is it that after all that time, you’re still having to introduce yourself to voters?”

Sir Keir however dismissed Mr Marr’s assessment and insisted he spent months talking to non-Labour voters to present his policies after previously having been turned away.

He said: “Well, we have had the pandemic. And that has been difficult.

“A lot of the time I’ve been leader, I’ve either been in restrictions and therefore unable to get out or we’ve had the rule of six which means, until recently, if I met anybody indoors, I’d have to do it with a mask on and I could only meet five people.

“But we’ve gone from an election where people wouldn’t hear us, they wouldn’t give us the time of day – last year I said in my conference speech, ‘listen again, give us another hearing’ – we’re now getting that.

“I’ve been out for months over the summer talking to people who don’t vote Labour across the country.

“And they’re open, they’re prepared to give us a hearing. What this conference gives us is a great opportunity to set out our case.”

Sir Keir will deliver his party conference speech on the last day of the event on Wednesday.