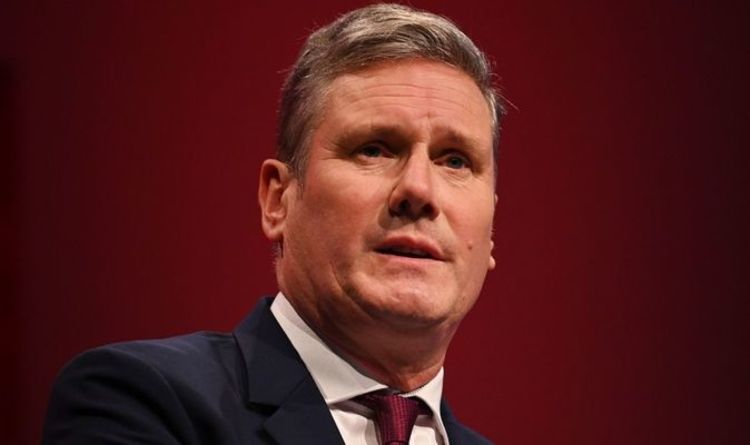 'We will make our Labour Party fit for government' says Starmer

As the Labour Party conference kicked off in Brighton, Sir Keir Starmer told BBC’s The Andrew Marr Show he could offer visas to 100,000 foreign workers to fill lorry driver shortages. But his plan has been completely destroyed, with Conservative Party strategists confident they have now almost stumbled on a general election-winning pitch that could transform the current crisis into a huge opportunity. The mounting issues have piled pressure onto Boris Johnson but Tory insiders now believe Sir Keir’s comments could be turned into an opportunity for the Government that could see the Prime Minister win power for another decade.

A Tory aide told Politico’s Playbook ministers were astounded Sir Keir decided to commit Labour to a major increase in immigration, and insisted the Conservatives would ruthlessly take advantage of those words for many years to come.

The Government insider bluntly said: “Vote Tory to get a pay rise, vote Labour to see mass immigration drive your wages down.”

Sir Keir has warned Mr Johnson he needs to take “emergency” action to address the shortage of lorry drivers which he claims is threatening to ruin Christmas.

He said the Prime Minister, if necessary, should recall Parliament to accelerate legislation to ensure the shelves remain stocked in the run-up to the festive season.

The Labour leader added a scheme to issue 5,000 temporary visas to foreign lorry drivers would not be up and running “for weeks”.

He raged: “I don’t want people in this country to have another Christmas ruined by this Prime Minister’s lack of planning.

“Every day wasted is prolonging this crisis. The Government has been talking about issuing visas but still hasn’t done anything.

“The Prime Minister should be taking emergency action today but yet again he’s failed to grasp the seriousness of the crisis.

“If it needs legislation, then let’s recall Parliament to get these emergency measures through urgently.

“The Prime Minister needs to get a grip.”

The Government has announced the temporary visa scheme for nearly 5,000 foreign food haulage drivers that was due to expire on Christmas Eve is now being extended until the end of February.

Downing Street has said 300 fuel drivers will be able to come to the UK from overseas “immediately” under a bespoke temporary visa.

Around 4,700 visas intended for foreign food haulage drivers will now be extended past the initially announced three month period, instead lasting from the end of this month until late February.

A total of 5,000 poultry workers will also be allowed to help keep supermarket shelves fully stocked in the weeks leading up to Christmas.

Chancellor of the Duchy of Lancaster Steve Barclay said: “The Government has taken decisive action to tackle the short-term disruption to our supply chains, and in particular the flow of fuel to forecourts.

“We are now seeing the impact of these interventions with more fuel being delivered to forecourts than sold and, if people continue to revert to their normal buying patterns, we will see smaller queues and prevent petrol stations closing.”

Business Secretary Kwasi Kwarteng added: “UK forecourt stock levels are trending up, deliveries of fuel to forecourts are above normal levels, and fuel demand is stabilising.

“It’s important to stress there is no national shortage of fuel in the UK, and people should continue to buy fuel as normal.”