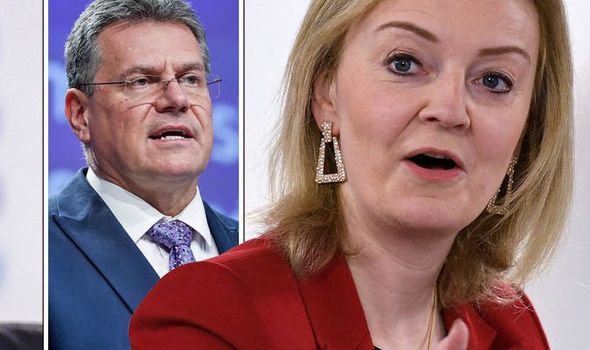 She warned urgent change to the way the Brexit mechanism works was needed to avoid Britain using the legal means to suspend aspects of the treaty.

The Foreign Secretary was appointed Britain’s lead negotiator with the EU on the Northern Ireland Protocol on Sunday following the resignation of Lord Frost as Brexit minister.

The Conservative peer said he remained “absolutely aligned” on Brexit with Mr Johnson but felt the need to quit in protest at “the current direction of travel” of the Government and fears over “coercive” Covid measures.

Ms Truss’s warning to the EU that she remains willing to trigger Article 16 will dash hopes on the continent that the new negotiator will be less hard-line in talks.

She said in the New Year the pace of negotiations must speed up if a solution is to be found.

Lord Frost originally agreed to three weeks of discussions with the EU to see if a fix to the issues caused by the Protocol could be found.

However, talks have now lasted over three months with no signs of a breakthrough.

Following today’s call with Mr Sefcovic, Ms Truss said: “We want a constructive relationship with the EU, underpinned by trade and our shared belief in freedom and democracy.

“Resolving the current issues is critical to unleashing that potential.

“The UK position has not changed. We need goods to flow freely between Great Britain and Northern Ireland, end the role of the ECJ as the final arbiter of disputes between us, and resolve other issues.

“We must pick up the pace on talks in the New Year. Our preference remains to reach an agreed solution.

“If this does not happen, we remain prepared to trigger Article 16 safeguards to deal with the very real problems faced in Northern Ireland and to protect the Belfast (Good Friday) Agreement in all its dimensions.”