Home » Politics » ‘Look at her record!’ Widdecombe blasts Sturgeon as only appeal is sounding ‘competent’ 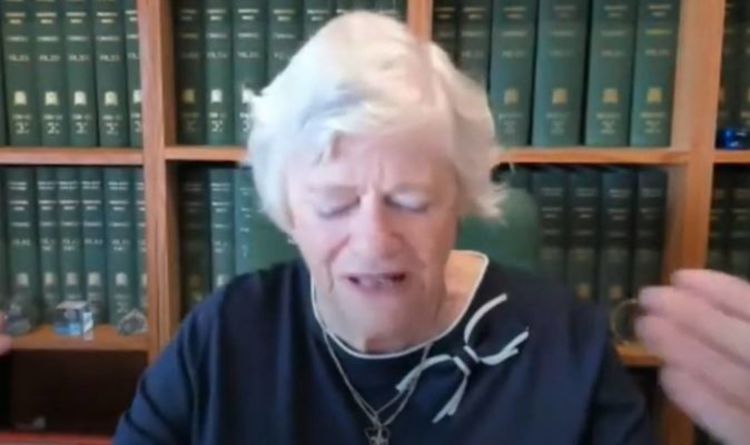 IndyRef2: Leaving UK would be bad for Scotland says Widdecombe

Ann Widdecombe spoke to Express.co.uk and urged Scottish voters to look past Nicola Sturgeon’s public appearance as the former MEP said the SNP leader’s record revealed a lot about the politician. Ms Widdecombe pointed to Scottish education, ambulance waiting times, outbreaks of Covid and drug deaths as being a true representation of Ms Sturgeon’s leadership rather than her charisma. Ms Widdecombe then discussed what the most damaging thing the Scots could do over the next few years in a brutal putdown of Ms Sturgeon.

Speaking to Express.co.uk, Ms Widdecombe was asked for her opinions on the new SNP/Green power-sharing deal which has allowed the Green Party co-leaders to sit on the Scottish cabinet.

The agreement has been seen by many as a ploy for pushing Scottish independence through Holyrood as the Greens and SNP are the two major parties who support it.

“I think the most damaging thing that the Scots could do to themselves would be to tuck themselves off from the rest of the UK.

“I think it’s time now for the Scots to look at her record in general, you know what’s happened to Scottish education it’s declined.”

An independent review by the Organisation for Economic Co-operation and Development (OECD) in Paris found the Scottish education system had no long-term vision nor did it keep up with the latest and best practices.

Beatriz Pont from the OECD said: “The system is really busy, and at risk of policy and institutional overload, and reactive and political approaches to CfE in the absence of an identified cycle of policy review.”

SNP ‘have been absolute disaster for Scotland’ says Leo Kearse

She added the system had “too many owners” with “no structured approach to look forward”.

“She looks in the control and she’s in favour of independence which a fair size majority of the Scots are.

“And that is what she is relied upon, well, I think the Scots should start doing a bit of analysis and this may now be the start of it.”

Figures released by the National Records of Scotland showed 1,339 people died in Scotland from drug overdoses in 2020, an increase of five percent from the previous year.

Scotland has been labelled as the “drug death capital of Europe” with the country having a drug death rate three and a half times higher than the UK as a whole and having the highest rate in Europe.

Drug deaths in Scotland have seen a steady increase each year since 1996 and saw the figure double between 2014-2019 with deaths rising 160 percent since the SNP’s 14 years in power.

Unite Scotland found ambulances miss three 999 calls while they wait for patient discharges as hospitals across Scotland speak of a “crisis” in healthcare.

The union has demanded a “major incident” be called to address the backlog which would force other services to aid wherever they could.