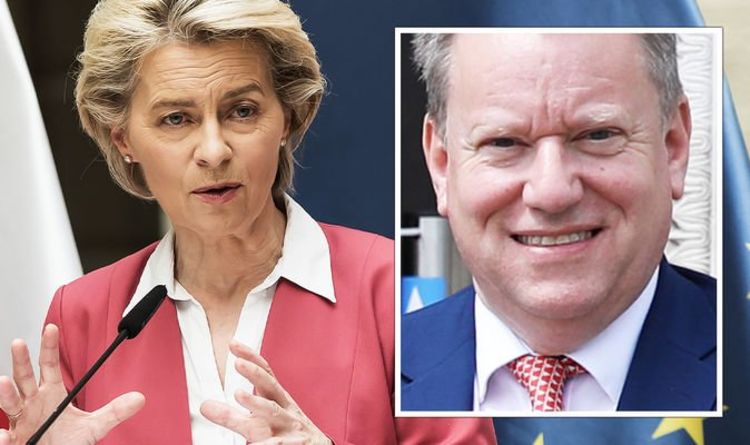 The Brexit minister will make an announcement on the House of Lords at the same time Brandon Lewis informs MPs of the Government’s plans in the Commons. Lord Frost had pledged to present his proposals to fix the problems caused by the Protocol before Parliament broke up for the summer on Thursday.

Officials have described the Protocol in its current form as “unworkable”.

Ministers have said they are willing to trigger Article 16 – the legal mechanism to suspend the Protocol – if the EU does not show more pragmatism on the implementation of the mechanism.

Last night No10 was remaining tight-lipped as to the contents of Lord Frost’s proposals.

However, it is not expected the Brexit minister will announce plans to end the Protocol.

Instead, a source told Express.co.uk the announcement would be a set of detailed proposals as to what the UK believes needs to change about the mechanism to save the Brexit deal.

The source added Brussels was unlikely to be surprised by what will be announced in Parliament.

“There has been constant contact with EU Vice President Maroš Šefčovič,” the source said.

Yesterday Prime Minister Boris Johnson spoke to Irish Taoiseach Micheál Martin ahead of the official unveiling of the plans.

A Downing Street spokesperson said following the call: “The Prime Minister emphasised that the way the Protocol is currently operating is causing significant disruption for the people in Northern Ireland.

“He made clear the UK Government’s commitment to protecting the Belfast (Good Friday) Agreement in all its dimensions.

“He said the EU must show pragmatism and solutions needed to be found to address the serious challenges that have arisen with the Protocol.”

Mr Johnson was originally meant to host the Irish premiere in person but was forced to cancel the meeting due to his need to isolate.

The Prime Minister was identified as a close contact of Health Secretary Sajid Javid after he tested positive for coronavirus over the weekend.

A representative for Mr Martin said the UK’s proposals “would be carefully considered”.

Warning against triggering Article 16, the spokesperson for the Taoiseach added: “He stressed the EU-UK framework for issues related to the Protocol”.

Going committees between Brussels and London have been set up to oversee the implementation of the Brexit withdrawal agreement and EU trade deal.

Any frictions in the withdrawal pact are meant to be negotiated at the committees.

However, Lord Frost has previously accused the EU of refusing to engage with proposals submitted by the UK.

Britain believes Brussels is being too “purist” in its implementation of the mechanism.

The EU has insisted the Protocol must be implemented “in full”.