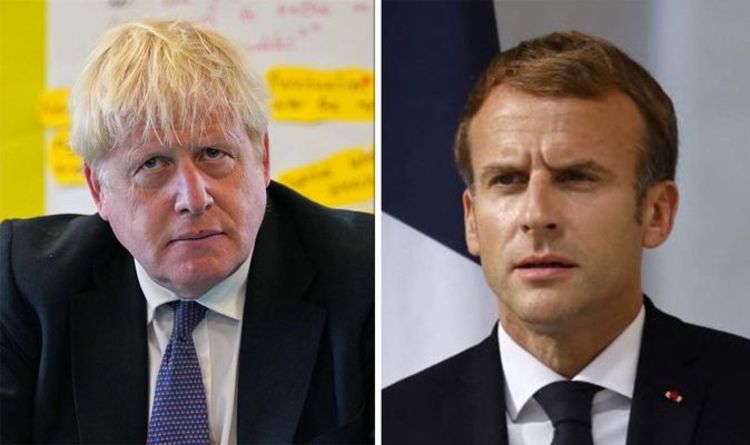 French Government insiders claimed that the UK Prime Minister’s “populist” pro-Brexit stance and short-term agendas make any serious negotiations a fantasy. One even claimed that Mr Johnson and Brexit Secretary Lord Frost “do not want agreements” with the EU over the controversial Northern Ireland Protocol.

Instead, the French President is said to believe that they are intent on “ramping up demands until they are impossible” to suit their own internal agendas.

A French Government source told the Guardian: “The instability is that some have concluded that [Mr] Johnson and Lord Frost do not want agreements on the Northern Ireland Protocol, or anything much, but will continue ramping up demands until they are impossible.”

Hostility between the two countries has been progressively increased since the historic 2016 EU referendum.

Issues including the Northern Ireland Protocol, Brexit withdrawal agreement, fishing, migrants crossing the English Channel and the Aukus deal with recently blindsided France have all contributed to an increasingly frosty relationship.

And with Mr Macron looking set to appoint his Brexit-bashing Europe minister Clément Beaune as a key figure in his election campaign team, things look unlikely to change.

Mr Beaune has previously claimed that the UK is “obsessed” with France and threatened to cut off energy supplies to the UK if Downing Street does not back down over Channel Islands fishing rights.

Earlier today he ramped up the pressure further by breaking ranks with the EU to threaten the UK over the protocol.

Speaking on Radio France, he addressed the ongoing spat between the bloc and the UK about the protocol’s threat to the UK’s internal market.

He said: “Discussion without pressure is naive.

“If dialogue is not successful with the British, there will be measures restricting our cooperation in areas important to them.”

The UK is also at loggerheads with the French over migrants crossing the channel.

It is believed that 7,000 have made the journey this year alone, double last year’s figures.

French authorities have been accused of not doing enough to stop asylum seekers from attempting the crossing.

The French later claimed that “not one euro” of a £54 million sum promised by the British to help fund the policing effort had been paid.

All this comes as Mr Macron was reportedly left seething with anger when Australia, America and the UK unveiled the Aukus deal to equip Scott Morrison’s nation with nuclear-powered submarines last month.

This meant that it reneged on a long-standing multi-billion pound deal they had signed with the French to buy diesel-powered vessels.

While US President Joe Biden appears to be making amends with his French counterpart, Mr Macron’s Government has not been so forthcoming with Mr Johnson.

A cancelled meeting between ministers from both countries has yet to be rearranged.

And with Mr Macron to begin campaigning for reelection next year shortly, it appears unlikely that he will soften his rhetoric over fears this could be exploited by rivals including far-right National Rally leader Marine Le Pen.