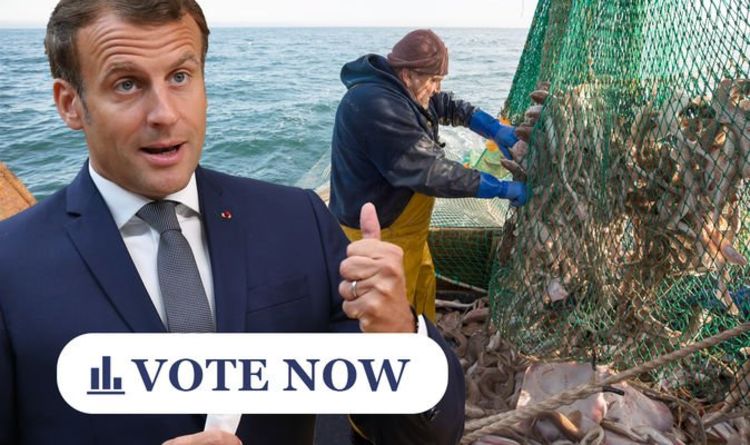 Last week, the UK rejected 35 French fishing boat licence applications out of 47, on the grounds that the applicants had not provided substantial evidence to prove a history of fishing in British waters. Since then, French ministers have been fuming over the decision and accused the UK of refusing to abide by the agreed deal they made with Brexit.

The deal agreed the UK will have the right to completely exclude EU boats after 2026, but from now until then, a transitional period will phase out EU boats allowing fewer and fewer of them to fish in UK waters over time.

Secretary of State for France, Clement Beaune, has threatened to cut the power supply, which is fed through to the UK from France – if Boris Johnson does not change the UK’s policy on French fishing boats.

Mr Beaune said: “Enough already! We have an agreement negotiated by France, by Michel Barnier, and it should be applied 100 percent. It isn’t being.”

He continued: “In the next few days, and I talked to my European counterparts on this subject yesterday, we will take measures at the European level or nationally, to apply pressure on the United Kingdom.

“We defend our interests. We do it nicely, and diplomatically, but when that doesn’t work, we take measures.

“For example, we can imagine, since we’re talking about energy…the United Kingdom depends on our energy supplies.

“It thinks that it can live all alone, and bash Europe.”

His rage was echoed by the French Maritime Minister Annick Girardin who has now given the UK a countdown.

In a tweet, she insisted the Prime Minister has until October 13 to change his mind about allowing French fishing boats in more leniently.

Ms Girardin wrote: “#Brexit| the [French government] remains mobilized and will soon present retaliatory measures in response to the low number of licenses granted to French fishermen, necessary to operate in British waters.”

In the face of an energy shortage imposed by France, do you think Boris should give in to Ms Girardin’s demands? Vote now.

The French ministers’ rage has been heightened by Jersey’s decision to give unlicensed French fishing boats 30 days to stop operating in Jersey waters.

Jersey has issued 64 full licences and 31 temporary licences to French boats, on top of the 47 vessels already licensed earlier this year. 75 applications have been turned down.

French ministers say that other representatives of the EU have expressed their support for France’s retaliatory measures.

One EU diplomat said: “On this, we are all for one and one for all, and in solidarity with the French.”

The Government has dug its heels in, insisting the correct protocol and methodology has been applied to the vetting procedure for licensing.

A Number 10 spokesperson said: “The Government has this year issued a large number of licences to EU vessels seeking to fish in our exclusive economic zone (12-200 nautical mile zone) and our territorial sea (6-12 nautical mile zone).

“Our approach has been reasonable and fully in line with our commitments in the Trade and Cooperation Agreement (TCA).

“EU vessels must provide evidence of a track record of fishing activity in those waters.

“We have been considering applications for vessels of under 12m in length to fish in this zone and, on the basis of the evidence available, we are able to grant licences for 12 of the 47 applications made.

“We continue to work with the Commission and the French authorities and will consider any further evidence provided to support the remaining licence applications.”

Now, the Prime Minister faces a tough decision. Allowing more French boats into British waters will enrage Brexiteers and British fishermen, but refusing French demands may see brutal consequences inflicted on the whole of the UK.

After such hostility from French ministers over the fishing row, do you think the UK can still count France as an ally? Tell us your thoughts in the comments below.

Want to stay up to date with the debates of the day? Our free Morning TV email sends the biggest clashes and jaw-dropping moments straight to your inbox. Never miss a viral moment again by signing up here: /newsletter-preference-centre