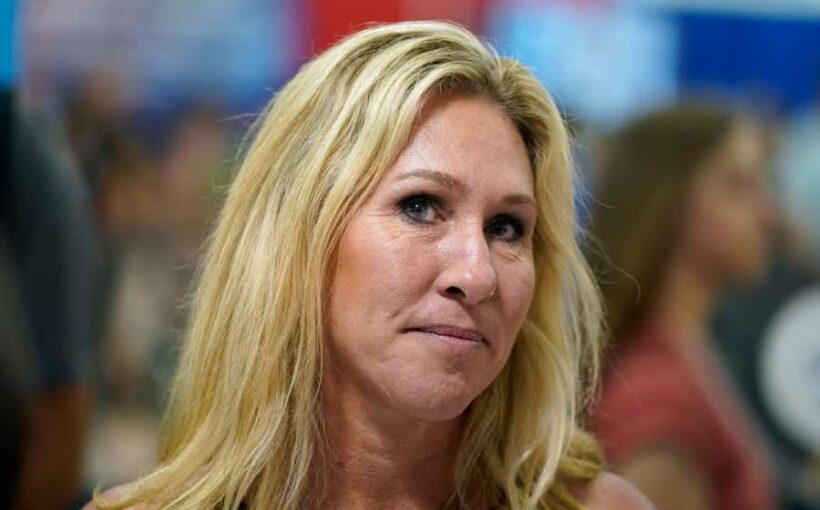 Marjorie Taylor Greene and Louie Gohmert — both of whom Rolling Stone reported were “intimately” involved in the planning of the Jan. 6 events that turned violent — think the people who carried out that violence have been getting a bad rap.

They went down to the D.C. jail to visit some of them on Wednesday but ran into a little trouble when the deputy warden wouldn’t let them parade through the facility without first securing the necessary approval for a tour.

Reps. Greene and Gohmert responded by harassing the deputy warden for minutes, telling her they had the right to tour the facility and that she was “out of line” for not allowing it. They then threatened to get her fired.

“It sounds like the only way we’re going to get approval is to get the federal judge to hold deputy warden here in contempt,” Gohmert said.

A Pretty Big Portion of Republicans Feel Violence May Be Necessary to 'Save Our Country': Poll

We Now Know Which Files Trump Is Trying to Hide from the Jan. 6 Committee

“Since she’s the one who has denied us entry,” Greene replied.

“The warden that was held in contempt got fired and is gone, right?” Gohmert asked after turning to the deputy warden.

Greene posted a video of the incident on her Gettr account, directing her followers to call the jail and demand transparency. The D.C. Department of Corrections did not immediately respond to questions about the incident from Rolling Stone.

The treatment alleged Capitol rioters are receiving in jail has been a topic of their court hearings. The most prominent case is that of Christopher Worrell, a Proud Boys member who has been accused of using pepper spray to assault federal officers during the insurrection. U.S. District Judge Royce Lamberth last month ordered the director of the D.C. Department of Corrections and the warden of the D.C. jail to be held in contempt, saying it is “clear” that Worrell’s civil rights were violated, referencing a delay in an operation Worrell needed on his hand.

Judge Lamberth asked the Justice Department to investigate whether inmates’ rights were being abused. A few weeks later, Justice Department lawyers called bullshit on Worrell’s claims. “The government has repeatedly been unable to sort fact from fiction in reviewing Mr. Worrell’s many claims of medical mistreatment because those claims have often been refuted, or at best unsubstantiated, by the medical notes and records that the government later obtains,” they wrote in a filing last week.

Worrell is one of several alleged rioters who have claimed they have been mistreated in jail, a trend that has frustrated some judges presiding over their cases. “They’re running a jail, not a hotel,” Judge Emmitt Sullivan said in a hearing last Wednesday. “Some people want hotel services.”

Greene and Gohmert have spent the bulk of the year pushing for better treatment for incarcerated Jan. 6 rioters. “Sadly, two systems of justice exist in America today: one for former President Trump along with those who support or don’t hate him and the other for everyone else,” Gohmert tweeted in July, an apparent play on comments Vice President Kamala Harris made last year following George Floyd’s death about how America has separate systems of justice for Black and white Americans.

Gohmert’s tweet was in service of a press conference he, Greene, and other lawmakers held to advocate for jailed rioters. The press conference was broken up by protesters soon after it started.

Prior to this year, however, neither Gohmert nor Greene had exactly been advocates for equitable treatment under the criminal justice system. Gohmert in 2018 was one of only a few dozen House members to vote against the First Step Act, the criminal justice reform bill that even President Trump supported. Around the same time, Greene was calling for the execution of prominent Democrats on Facebook.