Home » Politics » Next Prime Minister POLL: Who would you want to replace Boris Johnson as PM? VOTE HERE 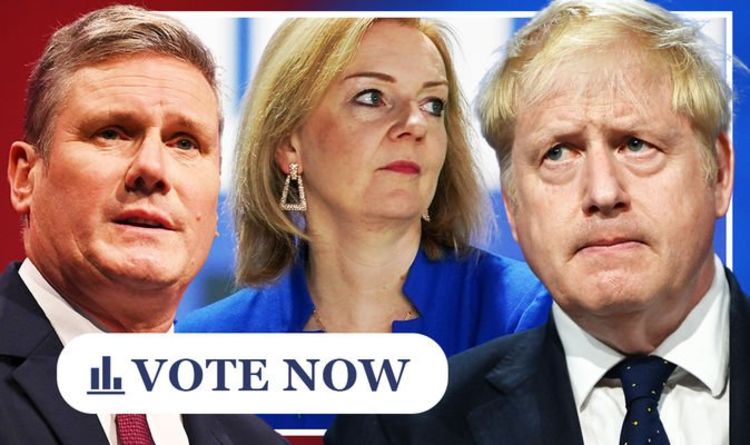 Vote in our poll below on who you would want to replace Mr Johnson as prime minister. And let us know more about what you think in the comments section at the end of the story.

Our poll includes the Chancellor, who has been tipped by broadcaster Mr Morgan.

Foreign Secretary Liz Truss and Secretary of State for Levelling Up, Housing and Communities Michael Gove are further options.

And former Foreign Secretary Jeremy Hunt, who was Mr Johnson’s rival in the race to become Tory leader, is another option.

If readers would rather see Labour in charge, they can pick Sir Keir Starmer or Greater Manchester Mayor Andy Burnham.

Alternatively, voters can say they’d rather keep Mr Johnson or opt for the “someone else” choice if their preferred candidate is not listed.

There is also a “don’t know” option for those who can’t make up their mind.

Our poll comes after new polls suggested the sleaze row is hitting the Conservatives at the ballot box.

The Government has come under fire for the handling of the Owen Paterson affair.

The Prime Minister was forced into a humiliating U-turn earlier this month over plans to prevent the former Cabinet minister’s immediate suspension for an alleged breach of lobbying rules by launching a review of the entire disciplinary system.

The debacle over Mr Paterson has been followed by revelations about MPs’ second jobs and homes.

A poll by Savanta ComRes for the Daily Mail put Labour six points ahead of Mr Johnson’s party.

The results, in which the Tories dropped four points and Sir Keir’s party climbed five since a similar poll a week ago, are based on a survey of more than 2,000 people in the UK, conducted on Thursday and Friday.

YouGov polling published on Friday and carried out this week also suggested the Tories had lost their lead, with its findings putting the Tories and Labour neck and neck on 35 percent of the vote share.

The survey, published in The Times, found two-thirds of voters viewed the Conservatives as “very sleazy” following Mr Paterson’s resignation and negative headlines over MPs’ second jobs and homes.

A separate survey by Redfield & Wilton Strategies on Wednesday put Labour two points ahead of the Tories.

Taking to Twitter on Saturday, Mr Morgan predicted Mr Johnson will be out of No 10 within a year and replaced by Mr Sunak.

The outspoken broadcaster tweeted: “Boris ‘laws are made to be broken’ Johnson’s sleazy chickens are coming home to roost.

“I predict Rishi Sunak will be Prime Minister within a year.”