Home » Politics » ‘Not Out of the Woods’: C.D.C. Issues Warning to the Unvaccinated

The renewed sense of urgency was aimed at millions of people who have not yet been vaccinated and therefore are most likely to be infected. 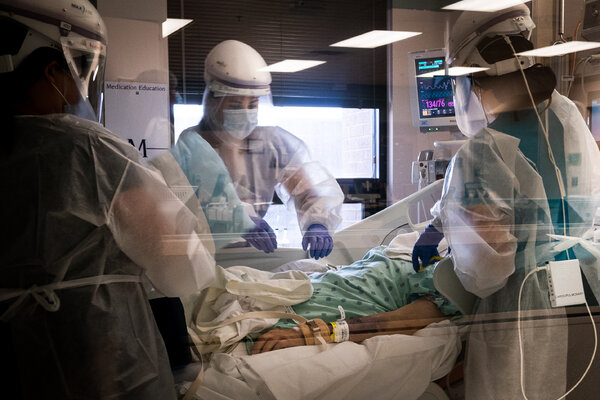 WASHINGTON — The director of the Centers for Disease Control and Prevention warned on Thursday that the United States was “not out of the woods yet” on the pandemic and was once again at a “pivotal point” as the highly infectious Delta variant ripped through unvaccinated communities.

Just weeks after President Biden threw a Fourth of July party on the South Lawn of the White House to declare independence from the virus, the director, Dr. Rochelle P. Walensky, called the now dominant variant “one of the most infectious respiratory viruses” known to scientists.

The renewed sense of urgency inside the administration was aimed at tens of millions of people who have not yet been vaccinated and therefore are most likely to be infected and become sick. Her grim message came at a time of growing anxiety and confusion, especially among parents of young children who are still not eligible to take the shot. And it underscored how quickly the pandemic’s latest surge had unsettled Americans who had begun to believe the worst was over, sending politicians and public health officials scrambling to recalibrate their responses.

“This is like the moment in the horror movie when you think the horror is over and the credits are about to roll,” said Representative Jamie Raskin, Democrat of Maryland. “And it all starts back up again.”

The choice by millions to reject the vaccine has had the consequences that public health officials predicted: The number of new cases in the country has shot up almost 250 percent since the beginning of the month, with an average of more than 41,000 infections being diagnosed each day during the past week — up from 12,000.

The disease caused by the virus is claiming about 250 lives each day — far fewer than during the peaks last year, but still 42 percent higher than two weeks ago. More than 97 percent of those hospitalized are unvaccinated, Dr. Walensky said last week.

The public health crisis is particularly acute in parts of the country where vaccination rates are the lowest. In Louisiana, Mississippi, Alabama and Florida, the number of daily new cases is up more than 200 percent in the past two weeks, driving new hospitalizations and deaths almost exclusively among the unvaccinated. Intensive care units are filled or filling in southern Missouri and northern Arkansas.

The turnabout is forcing both political parties in Washington to grapple — so far in halting and tentative ways — with questions about what tone they should strike, what guidance they should provide and what changes they need to make to confront the latest iteration of the worst public health crisis in a century.

The White House announced new grants on Thursday to local health offices for vaccines and increased testing in rural communities, even as administration officials said they were “making continued progress in our fight against the virus” and insisted that there was no need to reconsider their basic strategy. Although reports of so-called breakthrough infections in vaccinated people are growing, they remain relatively uncommon, and those that cause severe illness, hospitalization or death are especially rare.

But the surge in infections and hospitalizations in some parts of the country, even if limited mostly to people who have chosen not to be vaccinated, has presented Mr. Biden with an evolving challenge that could threaten the economic recovery and his own political standing.