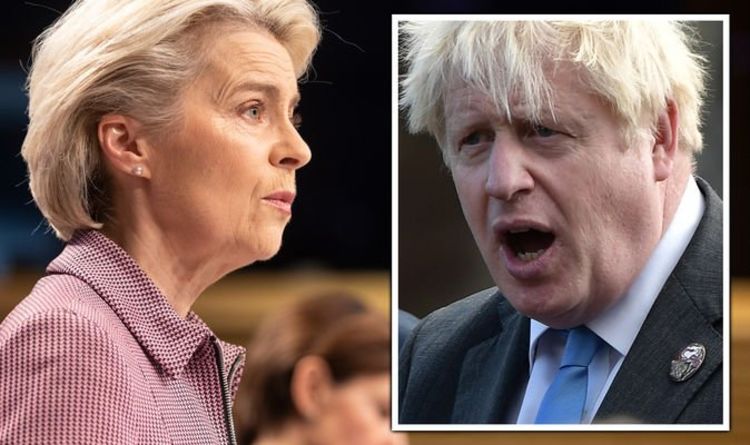 Following its threat, the EU insisted it had “shown readiness” to engage with the UK.

Due to the agreement drawn up by the UK and EU, the Commission claimed the ECJ “needs to play its role” within the deal.

This explosive statement comes following the culmination of talks with UK officials.

It read: “The EU was always clear in its intentions – it will not renegotiatie the protocol and the role of the ECJ under the protocol is not up for discussion.”

In the document seen by the BBC, the EU adds: “The Court of Juctice needs to play its role provided in the protocol with respect to all matters and application of EU law, which the protocol makes applicable in the UK or the UK in respect of Northern Ireland.

“The role of the ECJ is intrinsically linked to the integrity of the EU single market for goods and customs union.”

The bloc added: “The protocol partially integrates Northern Ireland, a part of a third country, into the EU’s single market for goods and customs union.

“The protocol also exeptionally ‘outsources’ the policing of the EU’s external market border to the UK and thus to a third country.

“This means that UK authorities are responsible for implementing and applying the provision of EU law made applicable in Northern Ireland by the jointly agreed protocol.

Despite the EU’s stance, Lord Frost has repeatedly claimed the ECJ must be removed from the Brexit deal.

Amid the seizure of a UK vessel and threats to introduce a raft of measures on November 2, Lord Frost warned France would violate the Trade and Cooperation Agreement.

A statement said: “Lord Frost also set out to the Vice President our concerns about the unjustified measures announced by France earlier this week to disrupt UK fisheries and wider trade, to threaten energy supplies, and to block further cooperation between the UK and the EU, for example on the Horizon research programme.

“Lord Frost made clear that, if these actions were implemented as planned on 2 November, they would put the European Union in breach of the Trade and Cooperation Agreement (TCA). The Government is accordingly considering the possibility, in those circumstances, of launching dispute settlement proceedings under the TCA, and of other practical responses, including implementing rigorous enforcement processes and checks on EU fishing activity in UK territorial waters, within the terms of the TCA.”

It also read: ““Lord Frost and EU Commission Vice President Maros Sefcovic met today in London to assess the latest state of play in our talks about the future of the Northern Ireland Protocol.

“The week’s talks have been conducted in a constructive spirit. While there is some overlap between our positions on a subset of the issues, the gaps between us remain substantial.

“As we have noted before, the EU’s proposals represent a welcome step forward but do not free up goods movements between Great Britain and Northern Ireland to the extent necessary for a durable solution.

“Nor do they yet engage with the changes needed in other areas, such as subsidy policy, VAT, and governance of the Protocol, including the role of the Court of Justice.

“Our position remains that substantial changes to the Protocol will be needed if we are to find a sustainable solution that works in the best interests of Northern Ireland and supports the Belfast (Good Friday) Agreement.”