Home » Politics » Pack it in, Macron! UK hits back at France after Channel Tunnel threat over fishing rights 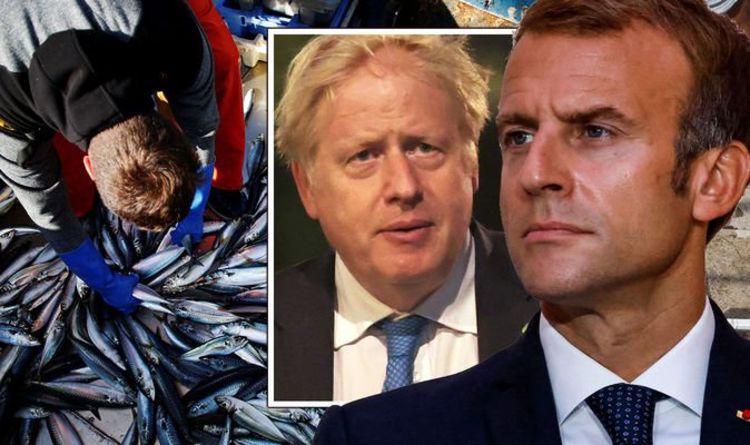 In a statement, it said that of the 170 boats which applied, 64 were being granted licences, with a further 31 receiving temporary licences to allow them more time to show they have a track record of operating in its waters.

But last night, Paris has hit out at the decision with the French Government stressing they could introduce sanctions involving energy supplies as well as British students in France.

He said: “Since the British are refusing to honour what they signed, as with other Anglo-Saxons in another area, the French fishermen of Boulogne-sur-Mer may be obliged, after 9 months of useless patience, to envisage ways to retaliate against the UK – for example by blocking ports or the entry of lorries towards the UK through the tunnel.”

But the UK Government defended their decision on the number of licences allocated and said they were made in line with the “Trade and Cooperation Agreement”.

Sources also played down France’s threats and stressed the importance of “constructive discussions”.

One Whitehall source said talks with the European Commission and France on the issue had been “cordial”.

They added the comments from France were “unhelpful” and made clear: “We want a cooperative relationship with our neighbours, not political threats.”

The European Commission has also come under pressure from French MEPs to introduce retaliatory measures which are warranted under the UK’s Trade and Cooperation Agreement with the European Union.

Nathalie Loiseau, French MEP from President Emmanuel Macron’s ruling La Republique en Marche party, said: “The attitude of the UK authorities is not based on any economic logic and makes our fishermen bear the brunt of the mistakes of Brexit.

“It is time for the Commission to talk louder.”

Pierre Karleskind MEP, Chairman of the European Parliament Committee on Fisheries, added: “The Commission must bang his fist on the table and at the right level.”

The European Commission last night welcomed the granting of further licences but a spokesman said it “regrets that it has not been possible to bring this issue now to an end.”

They added: “We will ask the UK for full disclosure of their methodology and will continue to further engage in the interest of our fishermen and women so that further licenses will be provided.”

The wrangling between the UK and France over the issue of fishing rights has been continuing for months.

Baroness Hoey says 'bring it on' to French fishing war

In May, the French threatened to cut off power supplies to Jersey – which gets 95 percent electricity from France – while dozens of French boats surrounded the island’s main port, St Helier, in protest.

The latest row – which comes at a time when UK relations with France are already at a low ebb – prompted fears of a further similar response.

Paris was furious after Australia announced earlier this month that it was cancelling an order for French submarines following a new defence pact with Britain and the US.

Fishing and the control of British waters was also a hot topic during Britain’s 2016 referendum to leave the EU.

But British fishermen have since accused the government of selling them out by allowing international boats to continue fishing in them.