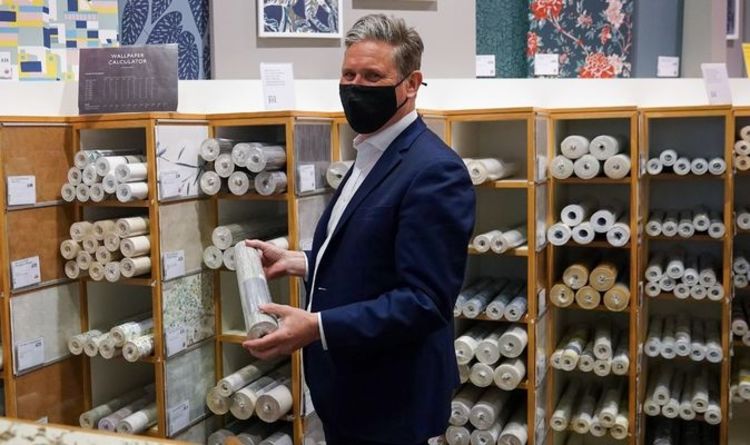 PMQs: Starmer accuses Johnson of ‘nipping out to choose wallpaper’

The Prime Minister has come under furious attack from the Labour Party leader as he faces a probe into the controversial refurbishment of his Downing Street flat. Earlier this morning, Sir Keir said: “I think it says something about this Prime Minister that in the middle of a pandemic he was nipping out of meetings to look at wallpaper. Wallpaper, by the way, that was about £840 a roll.” Mr Johnson insisted he is a fan of John Lewis after reports claimed he and fiancée had rejected furnishings by the department store left in the Number 11 flat by his predecessor Theresa May.

During a visit to King Solomon Academy in west London, the Prime Minister said: “The one thing I object to in this whole farrago of nonsense is I love John Lewis.

“But what I will say is what people want this Government to do is focus on their priorities.”

Labour leader Sir Keir attempted to use a campaign visit to poke fun at Mr Johnson, pictured browsing the wallpaper at the John Lewis store in Manchester’s Trafford Centre.

Wallpaper costing up to £840 a roll was used in the Downing Street flat refurbishment, according to reports. 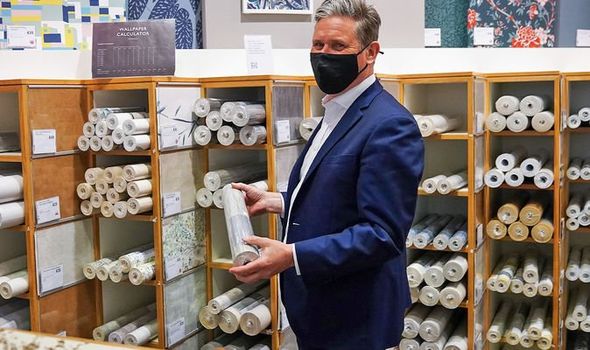 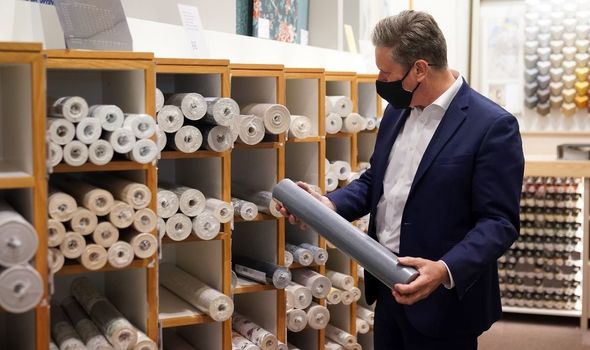 But Sir Keir’s bid to mock the Prime Minister has spectacularly backfired, with several people taking to Twitter to tear apart the Labour leader.

One person wrote: “Maybe he is looking for inspiration in developing Labour policies as so far he has come up with zero.”

Another Twitter user said: “Very apt as he’s about to get a pasting.” 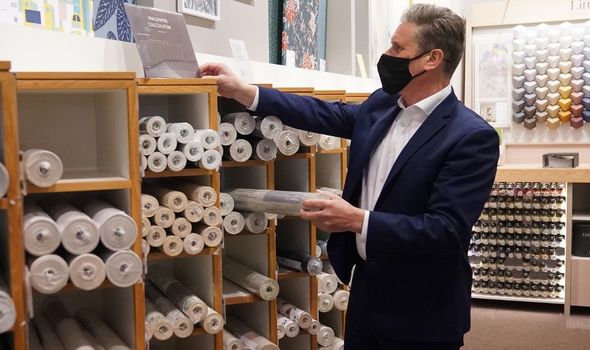 Conservative Party co-chairman Amanda Milling lashed out at the stunt from Sir Keir, accusing the Labour leader of “playing politics”.

She wrote on Twitter: “When we say Labour are playing political games this is exactly what we mean.

“Today the PM visited a school to see how we are levelling up opportunity, focusing on people’s priorities.

“Keir Starmer is doing exactly what we said he’d do – playing politics.” 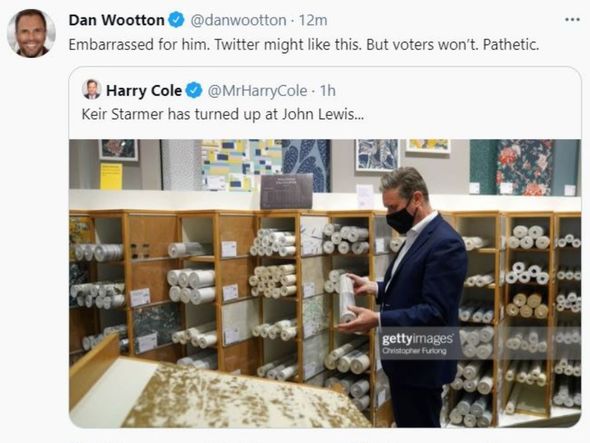 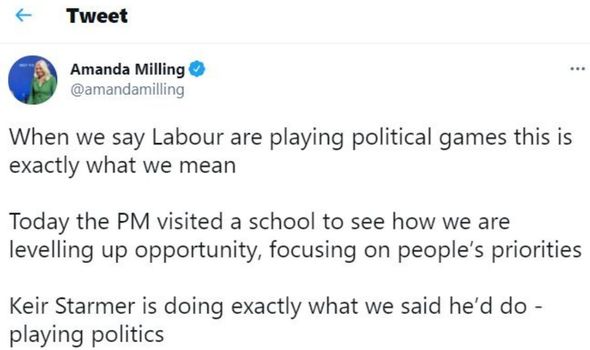 In a fiery exchange during Prime Minister’s Questions (PMQs) on Wednesday, Sir Keir said Mr Johnson had been choosing wallpaper for £840 a roll in the middle of the Covid pandemic.

He added: “He will also know any donation must be recorded in the register of ministers’ interests and, under the law, any donation of over £500 to a political party must be registered and declared. So, the rules are very clear.

“The Electoral Commission now thinks there are reasonable grounds to suspect an offence or offences may have occurred. That’s incredibly serious.

Mr Johnson snapped back: “No, I don’t. What I believe has been strained to breaking point is the credulity of the public.”

The Prime Minister argued the Labour leader had failed to put “serious and sensible” questions to him during the weekly parliamentary session, raging: “He goes on and on about wallpaper when I’ve told him umpteen times now, I paid for it.”

Following PMQs, Labour further attempted to mock Mr Johnson, with a spokesman for Sir Kier saying “unlike the Prime Minister he doesn’t turn his nose up to John Lewis thinking it’s too downmarket” and “wouldn’t spend £840 per roll on wallpaper”.

Attempting to defend the wallpaper remark, the spokesman said: “The real question here is about whether or not the Prime Minister has complied with the rules governing the ministerial code, the rules governing MPs making a declaration to the register of interests and – as we have seen today – whether or not the Conservative Party and the Prime Minister followed electoral law.

“That’s the big issue of today and if the Prime Minister wanted to end this saga he would come clean about precisely what’s happened.

“The only reason we are talking about wallpaper and furnishings is because the Prime Minister hasn’t come clean on what is becoming a daily story of more Tory sleaze.”