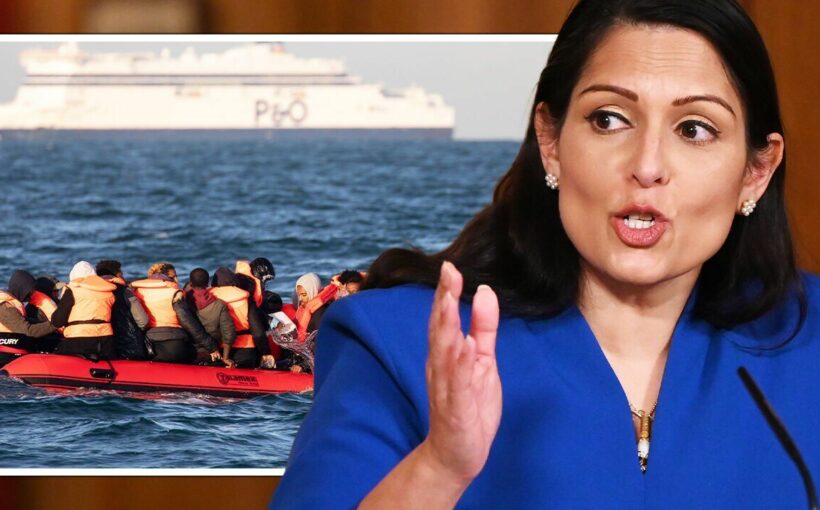 Priti Patel tells commons chamber to 'calm down and listen'

Express.co.uk understands that the Home Secretary is furious after an article was posted detailing legal get outs for the thousands of illegal migrants making the dangerous journey across the English Channel in small boats. She is understood to believe that the legal challenges to deportations expected to start on 14 June are part of Rejoiner efforts to undermine Brexit where voters were promised Britain would “take back control” of its borders.

A Whitehall source close to the Home Secretary said: “It’s no surprise that these anti-Brexit lawyers are now spending their time trying to defeat the Rwanda plan.

“They should just be honest with the public, they believe in open borders and will try and achieve them through any means necessary.”

The Rwanda policy was announced earlier this year in a bid to take on human traffickers who have been using loopholes in the law created by the Human Rights Act to exploit desperate economic migrants.

From 14 June those arriving in small boats will be subject to being relocated in the East African country where they can apply for asylum.

A similar policy was successful in Australia and it largely ended the flow of illegal migration.

Other countries including Denmark are following the UK’s example.

Tens of thousands of illegal migrants have made the dangerous crossing – with some deaths – in the Channel.

Many are forced to work in sweat shops in modern day slavery by the traffickers and their clients in the UK while some women and children have been forced into prostitution.

The migrants are made to pay thousands and are often endebted to their traffickers, who are organised crime gangs and in some case fund terrorism.

But the activities of left wing lawyers attempting to maintain open borders has allowed the trade in human cargo to continue.

The Home Secretary was understood to be particularly angry about an article posted on the website freemovement.org.uk which she and her staff allege works for keeping Britain’s borders completely open to allow uncontrolled migration.

Responding to news that deportations could start in a fortnight, the article noted that illegal migrants would need to be given seven or even 14 days’ notice.

It said: “These notices are not decisions or removal directions. If the person served with the notice is in detention, they are told that they must respond within seven days. If they are not in detention, the deadline is 14 days.

“The shorter timeframe for people in detention is presumably because of the supposition that legal advice is available through the Detained Duty Advice Scheme. The problems with this are well-known.”

It offers an eight-point plan to prevent any removals to Rwanda.

This includes pursuing a judicial review on aspects of the policy; demanding more time and evidence to justify removal; raise individual human rights claims and claim removal to Rwanda would be a breach of the European Convention of Human Rights; and provide explanations as to why the migrant did not claim asylum in another safe country.

Lawyers are also encouraged to challenge the selection process for people chosen to be deported to Rwanda; claim the policy is unlawful; suggest that their client is an adult at risk; and request all document including individual communications on the selection criteria.

The site adds: “Lastly, a call to please share information and experiences with other lawyers working on these cases.

“ILPA has been convening meetings of member lawyers and NGOs involved in this work and there are other forums such as the Refugee Legal Group. Contrary to what the government says, this policy is not a fight between the government and lawyers.

“It represents an existential threat to the asylum system and the people who need it. Our clients need us to work together to help them defeat this policy.”