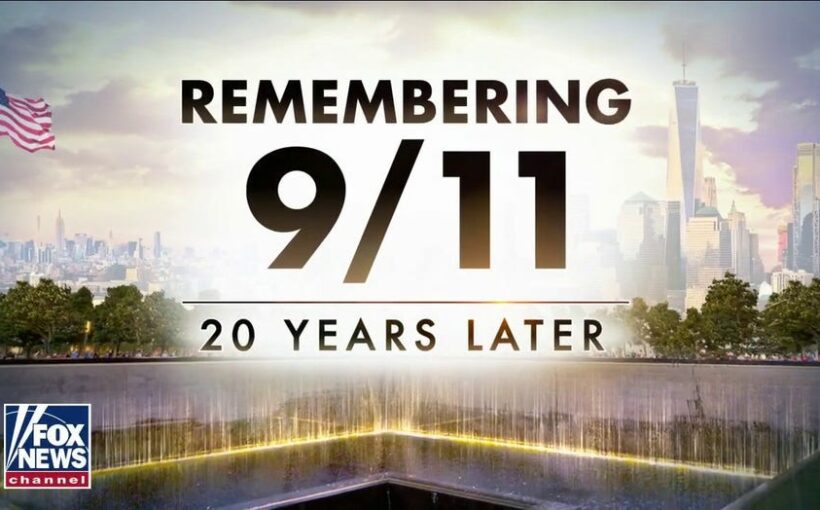 John Feal, a Demolition Supervisor who lost part of his foot working on Ground Zero, warns of the long-term health impacts on first responders fearing their healthcare legislation is in jeopardy.

Barbara Olson, a conservative commentator and lawyer, wasn’t panicked when hijackers took over her flight on Sept. 11, 2001, from Washington Dulles airport to Los Angeles, where she was heading for an appearance on Bill Maher’s TV show.

She managed to call her solicitor general husband, Ted Olson, twice from the back of the plane where the terrorists, armed with knives and box cutters, herded the passengers. She reported the hijacking aboard American Airlines Flight 77 and asked what she could convey to the captain.

According to the 9/11 Commission report, Olson was one of only two people who was able to make phone calls to loved ones from the plane, aside from flight attendant Renee May. Twenty years later, Barbara’s husband still marvels at her bravery and calm in the final moments of her life.

“To this day, I don’t know how in the world she managed to do it,” said Ted Olson, who received the calls at his Justice Department office in Washington, D.C. 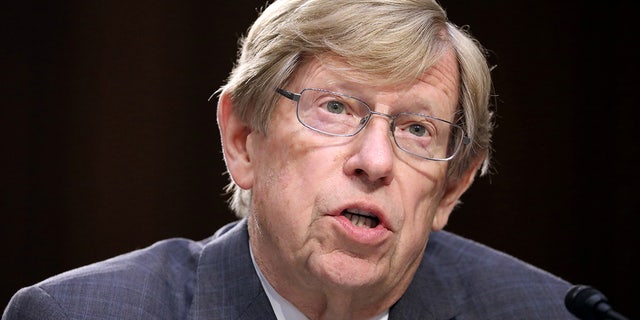 The two phone calls were very brief and both ended abruptly. Two hijacked planes had already crashed into the World Trade Center and Olson’s in-flight call prompted Ted Olson to warn others at the FBI and Justice Department that a third plane was under attack.

“Barbara was an extraordinarily resourceful person,” Olson told Fox News. “She was also a fighter. She would not have taken this quietly.”

Olson calls his late wife “a quintessential American” who believed strongly in herself and in a country that would allow her to achieve her dreams and ambitions. At the time of her death when the plane crashed into the Pentagon, she was a frequent TV commentator on outlets like CNN and Fox News as well as an author of a book about Hillary Clinton.

Barbara soon became the high-profile victim of the terrorist attacks and her husband, who had fame in successfully arguing the Bush v. Gore Supreme Court case, was also thrust into the spotlight as the public face of grief.

“Barbara’s was the first face that went up on television screens to the American people because people knew who Barbara was,” Olson said. 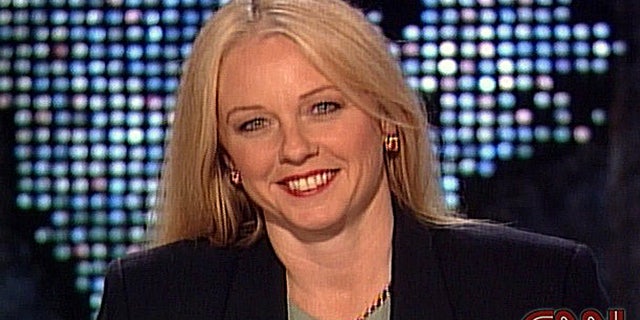 Barbara Olson, wife of former U.S. Solicitor General Theodore Olson, was one of the 64 people who died in the crash of American Airlines Flight 77 into the Pentagon. Olson made two calls to inform her husband that the airplane, flying from Washington’s Dulles airport to Los Angeles, had been hijacked.  She told him that the hijackers, armed with knives and cardboard cutters, herded the passengers and crew, including the pilot, toward the back of the plane. Olson, a frequent contributor to CNN’s "Larry King Live," is shown in a video still from the show.
(Reuters)

Olson had to make a choice fairly quickly. Would he understandably retreat in the midst of sudden grief, or would he choose to carry on with work and with life. Olson said he made a conscious decision to fight on, just as he expects Barbara would have done.

“I felt overwhelmingly the weight of all of the disaster,” Olson recalled. “It was personalized to me but it was also devastating for our nation.”

“I felt some responsibility to speak about it so that we could communicate the idea that we’ve been attacked but we will not be defeated. And I also felt some need to talk about Barbara because she was such an incredible person and she was so tragically murdered. I felt that I could be a little bit of her voice.”

Now in 2021, that decision to live still guides Olson today. He’ll be 81 on Sept. 11. Yet, far from retirement, he works full-time as a partner at Gibson, Dunn & Crutcher LLP in Washington D.C.

He found love again after the terrorist attacks and will be married for 15 years. Knowing how precious life is, Olson decided to dig down deep and seize life, rather than “curl up in a corner.”

“It’s survival,” Olson said of his mindset of resiliency. “You can either retire and disappear. Or you can embrace the opportunities that you’re given by the gift of life in the first place.”

“I felt very strongly that Barbara would have wanted that,” Olson added. “That was the kind of person Barbara was.”

Barbara Olson wasn’t supposed to be on the ill-fated plane.

She had initially planned to fly out to Los Angeles to appear on Maher’s “Politically Incorrect” show on Sept. 10. But she changed her travel schedule to be with Ted Olson for his birthday, which is Sept. 11. The couple had planned a celebration dinner the night before.

The morning of Sept. 11, Ted Olson woke early, as was his habit, to leave their home in the northern Virginia suburbs before 6 a.m. to beat the rush hour traffic into Washington, D.C. Barbara was still home. The couple talked over the phone before she boarded her flight at Dulles airport in what Olson recalls was likely a routine conversation about wishing his wife a good trip. 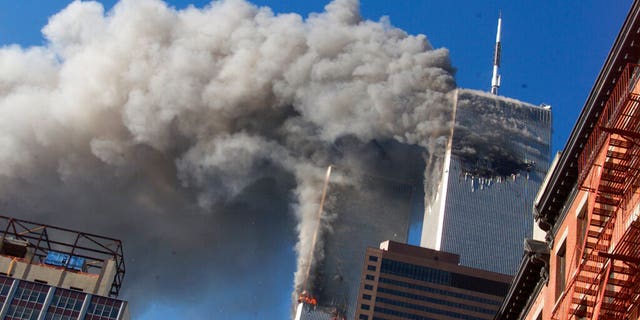 In this Sept. 11, 2001, file photo, smoke rises from the burning twin towers of the World Trade Center after hijacked planes crashed into the towers in New York City. (AP Photo/Richard Drew, File)

Olson, the newly confirmed solicitor general under President George W. Bush, was at his Justice Department office when two hijacked planes crashed into the World Trade Center, stunning the world. As he and the rest of the nation watched in horror, Olson’s thoughts turned to concern for Barbara’s flight.

Initially, he was relieved when his assistant walked in to let him know Barbara was on the phone.

During that first phone call, which was sometime between 9:16 and 9:26 a.m., Barbara told her husband hijackers took over her plane and they were unaware that she was on the phone. She only spoke for a minute before the line cut out.

She managed to call back again shortly thereafter and she and her husband tried to figure out where the plane was in the air. Olson told his wife about the World Trade Center attacks, but remarkably Barbara “did not display signs of panic,” according to the 9/11 Commission report. She seemed fully in control of herself because she wanted to do something to help, Olson recalled.

But the phone line abruptly disconnected again, ending what would be the final conversation of their five-year marriage. Barbara Olson was 45 years old.

“We weren’t in a position to know that we were having last words because all of a sudden the phone went dead,” Olson said. “And I suppose that was about the point at which [the plane] was actually crashing into the Pentagon.”

Olson now has had 20 9/11 remembrances since then, and just as many birthdays on Sept. 11. He typically prefers to be away from Washington, D.C., around this time, and retreat to his Wisconsin home along Lake Michigan.

Given the gravity of this year’s milestone, Olson will attend the Pentagon memorial service with his children and grandchildren. He feels an obligation to Barbara and other victims to participate, no matter how painful it may be.

“I think that we must never forget what happened that day,” Olson said. 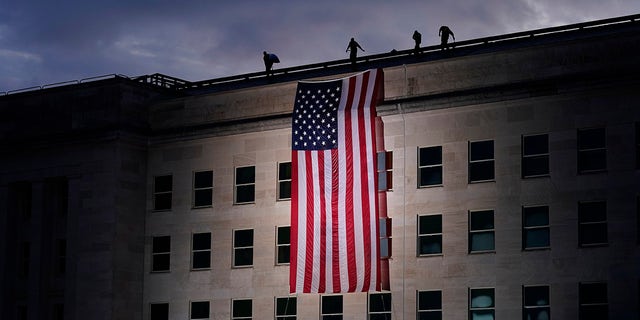 A large American flag is unfurled at the Pentagon ahead of ceremonies at the National 9/11 Pentagon Memorial to honor the 184 people killed in the 2001 terrorist attack on the Pentagon, in Washington, Friday Sept. 11, 2020. (AP Photo/J. Scott Applewhite)

There are still too many in this world who hate America and want to destroy our way of life and attack the freedoms our country offers, Olson said. He hopes this memorial can serve as a reminder to be vigilant.

“We must not let our guard down,” he said.

With his birthday now forever linked to a grievous act of terrorism and a personal heartache, Olson said he doesn’t try to celebrate his annual trip around the sun on some other artificial date. His birth milestone will always be the day of Barbara’s death.

“Whatever pain and memories go along with this, that’s part of living,” Olson said. “You can’t just make it disappear.”