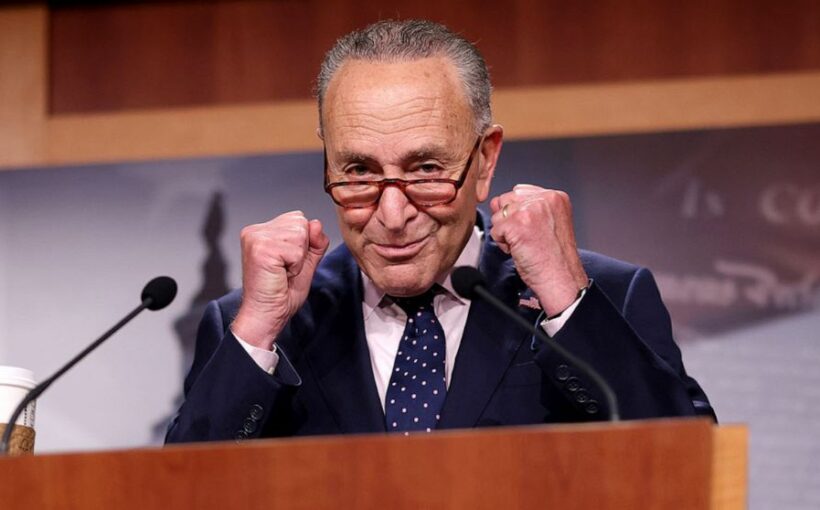 Democrats were quick to celebrate rare back-to-back victories when the Senate approved both a $1.1 trillion infrastructure bill and an additional $3.5 trillion package piled high with progressive priorities just before adjourning for recess on Wednesday – but it’s a rocky road ahead before either bill makes it to the president’s desk to be signed into law.

The House is expected to return the week of Aug. 23 to vote on the $3.5 trillion budget resolution that paves the way for Congress to squeak out a behemoth package filled to the brim with social and progressive priorities, including combatting climate change, funding universal pre-K, and reforming immigration law – but unlike the bipartisan infrastructure bill, this one with zero Republican support.

Once the resolution is passed, committees in both the House and Senate will begin their work drafting policy and legislation that will eventually become what’s called a “reconciliation” bill that can clear the Senate with just a simple majority.

The House is not expected, though, to vote on the $1.1 trillion infrastructure bill that passed with bipartisan support in the Senate when the chamber returns in late August.

House Speaker Nancy Pelosi has vowed to hold on to that bill until the lower chamber gets the larger reconciliation bill from the Senate, which could take weeks, if not months, to be finalized.

“I am not freelancing. This is the consensus,” Pelosi told colleagues on a Democratic caucus call Wednesday afternoon, according to sources.

“The president has said he’s all for the bipartisan approach … bravo! That’s progress, but it ain’t the whole vision,” Pelosi said.

“The votes in the House and Senate depend on us having both bills,” she added.

But there are some fractures in the Democratic caucus when it comes to the fate of those bills. Democrats have just a three-seat majority in the House. Any handful of members can be potential roadblocks if they are determined enough to challenge Pelosi and the White House.

Moderate Democrats and Republicans in the House have rallied behind the bipartisan $1.1 trillion infrastructure agreement in the Senate and are among its most vocal supporters in the chamber, but they want Pelosi and Democratic leaders to put the Senate bill on the floor without changes, so it can pass quickly and head to President Biden’s desk.

“This once-in-a-century investment deserves its own consideration, without regard to other legislation,” Rep. Josh Gottheimer, D-N.J., and other members wrote in a letter to Pelosi.

Progressives, however, have grumbled about the size and scope of the Senate-approved bill. They wanted to “go big” on infrastructure – anywhere from $6 to $10 trillion – and are still privately pushing for changes to the Senate bill or reconciling it with a similar House bill crafted by the chairman of the House Committee on Transportation and Infrastructure.

Democrats will also have to contend with members of their own party, namely Sens. Joe Manchin of West Virginia and Kyrsten Sinema of Arizona, both of whom have expressed reservations about the price tag of the larger reconciliation bill.

On Wednesday, Manchin released a statement hailing the bipartisan infrastructure agreement in the Senate, but he poured cold water on progressive aspirations for the $3.5 trillion bill.

“Early this morning, I voted ‘YES’ on a procedural vote to move forward on the budget reconciliation process because I believe it is important to discuss the fiscal policy future of this country,” Manchin, D-W.Va., said in a statement. “However, I have serious concerns about the grave consequences facing West Virginians and every American family if Congress decides to spend another $3.5 trillion.”

The White House said Wednesday President Joe Biden was “comfortable” with the $3.5 trillion price tag, but did not rule out negotiating the cost.

Senate Majority Leader Chuck Schumer was asked about Manchin’s remarks at a press conference Wednesday, and he expressed optimism that Democrats will stand united and suggested Democrats will not consider lowering the price tag in the end.

Schumer added that it will “absolutely not” “be easy,” but said “every member of our caucus realizes that unity is our strength … we have to come together.”

“This was one of the most significant legislative days we’ve had in a long time in the U.S. Senate, but we still have a long road to travel. It’s as if we caught a pass, a nice long pass at midfield – but we’ve still got 50 yards to go before we score a touchdown,” Schumer said.

As lawmakers wrestle these two massive bills through Congress when they return from recess, they will also have to pass a bill to fund the government and raise the debt ceiling before the end of September.

Schumer on Wednesday said he did not believe Republicans would let the U.S. default on its debt as the government approaches it current borrowing capacity.

“I cannot believe the Republicans will let the country default, and it has always been bipartisan to deal with the debt ceiling,” Schumer told reporters, noting Democrats backed debt limit increases three times under former Republican President Donald Trump.

46 Republican senators signed onto a letter this week affirming that they will not vote to raise the debt ceiling.

“Our friends across the aisle should not expect traditional bipartisan borrowing to finance their nontraditional reckless taxing and spending spree,” Senate Minority Leader Mitch McConnell said on the Senate floor Monday. “That’s not how this works.”