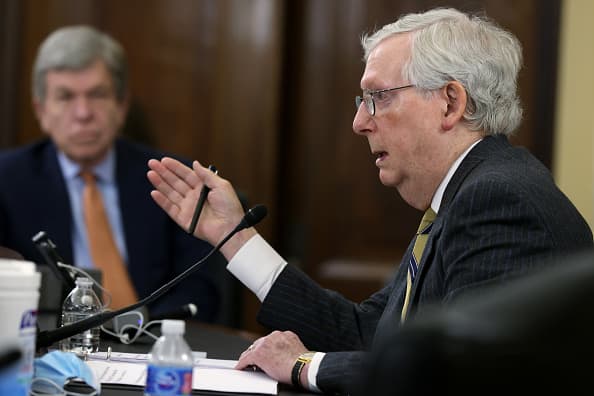 Democrats argue the For the People Act, also known as S.1, would combat voter suppression by making it easier to register and vote, prevent gerrymandering, improve election cybersecurity and reform campaign finance, among other initiatives.

The caucus views the legislation as a way to combat a wave of Republican-backed voter restrictions proposed in state legislatures across the country.

"I would like to ask my Republican colleagues, why are you so afraid of democracy?" Schumer asked. "Why, instead of trying to win voters over that you lost in the last election, are you trying to prevent them from voting?"

McConnell shot back: "Talk about shame.  If anybody ought to be feeling any shame around here, it's turning the FEC into a partisan prosecutor. The majority controlled by the president's party to harass and intimidate the other side — that's what you ought to be ashamed about."

The legislation would reform the Federal Election Commission to have five commissioners, down from the current six, "in order to break gridlock," according to a Democratic description of the legislation. No more than two members would be allowed to be members of the same party. The commission is currently divided between three Republicans, two Democrats and an independent.

The minority leader said S.1 would create an "implementation nightmare" for election administrators and officials, a sentiment emphasized by Republicans opposing the bill.

"This is nowhere near ready for primetime," McConnell said. "It's an invitation to total chaos"

The bill faces an uphill battle in the Senate, where it would require a minimum of 10 Republican votes to defeat a filibuster and move to a final vote on passage.

The House passed its version of the For the People Act, H.R.1, on March 3 with all but one Democrat voting in favor of and all Republicans voting against the legislation.

Schumer previously said "everything is on the table" for Senate Democrats to pass the legislation as the caucus considers filibuster reform.

The debate over election integrity came to a head when conspiracy theories about widespread voter fraud led violent pro-Trump rioters to storm the Capitol on Jan. 6 in an attempt to overturn the results of the 2020 presidential election.

The deadly insurrection came after Republican leaders, including former President Donald Trump, continually spread claims that mail-in and early voting led to widespread voter fraud, despite no evidence of such fraud.