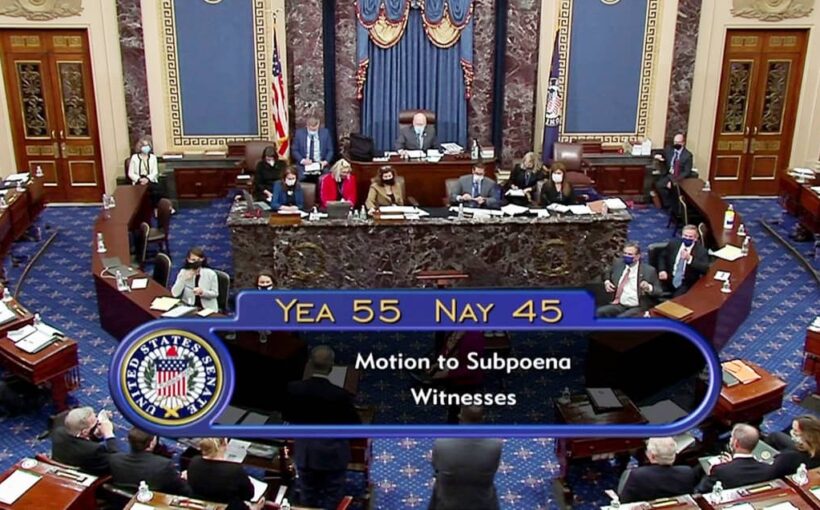 The Senate on Saturday voted to begin the process of calling witnesses as part of the second impeachment trial of Donald Trump, creating confusion about how to proceed and potentially delaying a verdict.

The chamber can vote by a simple majority to call specific witnesses.

The surprise move throws a wrench into the trial, which was expected to end with a vote on whether to convict the former president by Saturday afternoon. It is unclear how long the process will last or how many witnesses will testify.

The chamber voted to allow witnesses by a 55-45 margin, as five Republicans joined all Democrats. The GOP senators were Susan Collins of Maine, Lindsey Graham of South Carolina, Lisa Murkowski of Alaska, Mitt Romney of Utah and Ben Sasse of Nebraska.

While the other four Republicans are considered the most likely in their party to vote to convict Trump, Graham is a Trump ally who has coordinated with the former president's lawyers during the trial.

Footage of the Senate floor after the vote showed lawmakers huddling and discussing how to proceed following the twist in the case.

The vote to call witnesses comes as more details were revealed Friday night about an expletive-laden argument between House GOP Leader Kevin McCarthy and Trump in a phone call as the Capitol riot was unfolding, in which Trump appeared to side with rioters and said they were more "upset" over the election results than McCarthy.

Lead impeachment manager Rep. Jamie Raskin, D-Md., called Saturday for the deposition of Rep. Jaime Herrera Beutler, R-WA, who had confirmed what was said on the call.

"Last night Congresswoman Jaime Herrera Beutler of Washington State issued a statement confirming that in the middle of the insurrection when House Minority Leader Kevin McCarthy called the president to beg for help President Trump responded, and I quote, 'Well, Kevin I guess these people are more upset about the election than you are,'" Raskin, D-Md., during Saturday's hearing.

"Needless to say this is an additional critical piece of corroborating evidence further confirming the charges before you as well as the president's willful dereliction of duty and desertion of duty as commander of the United States, his state of mind and his further incitement of the insurrection on January 6th," he said.

Trump lawyer Michael van der Veen responded by saying "we should close this case out today" and that the call to subpoena witnesses shows the House didn't properly investigate the riots.

"First of all this is the proper time that we were assigned to talk about witnesses," Raskin responded. "This is completely within the course of rules set forth by the Senate. There's nothing remotely unusual about this."

Throughout Friday night's question-and-answer session, Trump's legal team repeatedly declined to say what the former president knew about the threats to former Vice President Mike Pence's life and when.

It led an exasperated Raskin to urge the lawyers to "bring your client up here and have him testify under oath about why he was sending out tweets denouncing the vice president of the United States while the vice president was being hunted down by a mob."

Republicans who have signaled they will vote to acquit Trump warned they could try to drag out the trial and process of calling witnesses. One GOP senator also argued the move could delay confirmation of President Joe Biden's Cabinet and passage of Democrats' $1.9 trillion coronavirus relief package.

"No end in sight. This could drag on indefinitely," tweeted GOP Sen. John Cornyn of Texas, who has opposed both the trial and the pandemic aid plan.

Democrats have rushed to boost the health-care system and economy without Republican votes before March 14, when programs buoying jobless Americans expire. Many GOP lawmakers have resisted any more federal spending to respond to the pandemic.

Meanwhile, it is unclear whether calling witnesses would affect the votes of any senators who had already made up their minds. Senate Minority Leader Mitch McConnell, for instance, told colleagues he would vote to acquit Trump, NBC News confirmed earlier Saturday.

The Kentucky Republican argued the chamber did not have the jurisdiction to convict a former president. The House impeached Trump when he was still president, and McConnell declined to use emergency powers to bring the Senate back before Biden's inauguration.