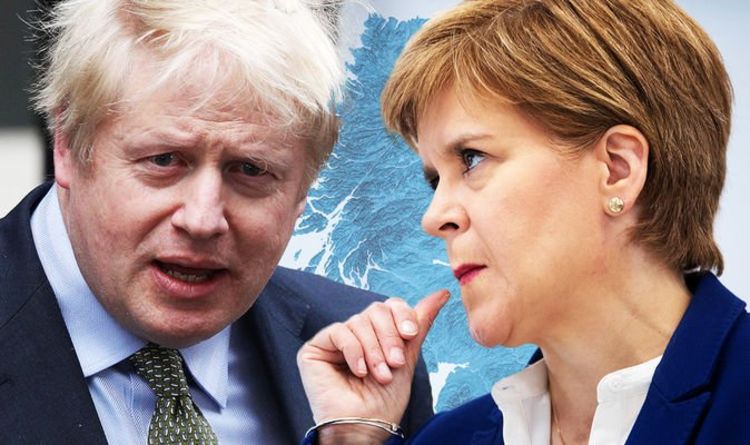 Scotland’s First Minister will tell SNP members today that “democracy must – and will – prevail” to allow another vote on Scottish independence. Ms Sturgeon, who is due to deliver the closing speech of the SNP conference shortly before midday, is expected to say that she hopes to adopt an approach of “co-operation not confrontation” in her attempts to secure a second referendum.

The SNP leader has called for another referendum by the end of 2023 when the coronavirus pandemic is over, although the UK Government remains opposed to another vote with Cabinet Office Minister Michael Gove making the message clear to the Daily Express today.

She will say: “My approach to government and to politics will be, as far as possible, co-operation not confrontation.

“The experience of the pandemic and the challenges we face as a result reinforces my view that this is the right approach.

“So it is in that spirit of co-operation that I hope the Scottish and UK governments can reach agreement – as we did in 2014 – to allow the democratic wishes of the people of Scotland to be heard and respected.

“But, this much is clear: democracy must – and will – prevail.”

Willie Rennie, Scottish Liberal Democrat MSP, said: “The Scottish Government’s record on the economy is an absolute shambles and there’s no sign it will get better by 2023, especially if ministers and civil servants are focusing on another independence referendum.

“We need a robust and diverse economy where businesses can thrive, and everyone can have access to work.”

Donald Cameron MSP, Scottish Tory Constitution spokesperson, said: “Independence, as usual, is put above everything else by the nationalists, which will be deeply damaging for our economy.”

Pamela Nash, chief executive of Scotland in Union, said: “This is Groundhog Day yet again at SNP conference, with nationalist politicians only interested in talking about the constitution.

“The First Minister has clearly run out of ideas.

“If Nicola Sturgeon was serious about believing in co-operation, she would focus on making devolution work and using Holyrood’s powers to build a recovery for everyone.

“Instead, she is blindsided by her obsession with breaking up our country.

“Scotland deserves better than a government which prioritises division ahead of devolution.”

Meanwhile, Alex Salmond has hit out at the SNP as he pledged his party would create an IndyRef2 leaflet to shove through thousands of letterboxes.

The former Scottish First Minister closed his party’s first conference last month by pitching ALBA as an alternative to the SNP and the Scottish Greens, branding the Government a “coalition of chaos”.

But, in the same speech, Mr Salmond urged his supporters not to attack the SNP, claiming it would be “the most important thing I have to say to you today”.

However, the publication’s creation would be led by two figures who have provoked controversy over recent years for their outspoken opposition to the current SNP leadership.

Robin McAlpine, head of the pro-independence Common Weal think tank until earlier this year, will write the book.

Stuart Campbell, who writes the Wings Over Scotland blog, would also edit the pamphlet, after producing the Wee Blue Book in the run up to the 2014 independence referendum.