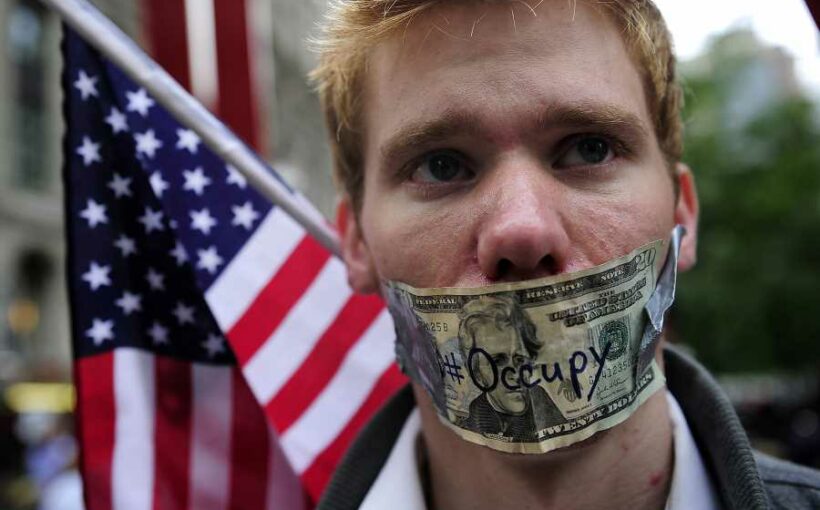 At the height of last year’s Black Lives Matter uprising, a recording surfaced of a call President Trump held with state governors. In it, he made a comparison: “This is like Occupy Wall Street.” He urged them to waste no time in repeating the coordinated police assaults that had swept away the Occupy encampments across the country. Until the Occupy crackdown began, he told the governors, “It was a disaster.”

Trump’s political career had a kind of origin story in Occupy Wall Street, which began in Zuccotti Park 10 years ago today. In early 2012, his eventual campaign chief and White House adviser Steve Bannon was directing a take-down film on the movement, featuring blogger and provocateur Andrew Breitbart. Breitbart suddenly died during production and Bannon took control of Breitbart’s company, which he turned into the “platform of the alt-right” that would help land Trump in the presidency. For Bannon, as with Trump on his call with the governors, Occupy revealed an enemy that required conservatives to take off their gloves, dispense with civility, and fight for their version of civilization.

The reactionary response happened worldwide. Occupy Wall Street was part of a global movement in 2011 that spread from Tunisia and Egypt, across the Middle East, and through southern Europe. It took until autumn for what began as the Arab Spring to arrive in lower Manhattan. “In New York, we’re still the baby movement in the world,” I heard organizer Marina Sitrin tell an audience at an anarchist social center in Athens, Greece, at the time. From there it ricocheted even further, in cities and towns throughout the United States, and from London and New Zealand to Nigeria.

Wherever it appeared, the 2011 movement had in common two things: the tactic of occupying public spaces for days and weeks at a time, and the goal of unseating unjust accretions of power. Taken together, that time, space, and rebellion led to another common feature: radical experiments with what a truly accountable democracy might look like. In the wake of the 2008 financial crisis, and buoyed by the rise of the internet, democracy was due for a reboot.

I am not sure there was as much cohesion to the opposition these uprisings faced, from Bannon’s media blitz to Bashar al-Assad’s airstrikes. On the 10-year anniversary of Occupy, though, it is the opposition that haunts me most. I wrote a whole book trying to figure out whether Occupy Wall Street was a success or failure. But 10 years on, I think the question is a distraction. Looming over anything protesters did, now, is the enormity of the crackdown that followed.

In 2011, before they were war-zones, Yemen, Libya, and Syria had nonviolent protests against intransigent regimes. The regimes struck back brutally. These nightmares began with outbreaks of hope. That hope was intolerable. Millions of people have been displaced, and hundreds of thousands killed, as a result.

In Europe, protesters did what many U.S. pundits told Occupy to do: Get into the system, elect politicians. Protest-aligned parties took national power in Greece and Spain. But the central European banks clung harder to austerity policies that put housing and decent work out of reach for a generation of young people. This wasn’t as bloody as the crackdowns in the Arab world, but it had perverse effects. When the politics of providing for people who had been deprived became untenable, right-wing movements arose to blame the symptoms of austerity policies on refugees arriving from the Syrian crackdown.

In the United States, well, we eventually got President Trump, the inconvenienced owner of the building at 40 Wall Street. (I recall the drugstore on its bottom floor being a popular escape route from police.) He came to power mimicking some of Occupy’s messaging about economic injustice and the power of the political elite, but with a different answer: decrying immigrants, denying climate change, and “I alone can fix it.” Once in office, his policies gave handouts to the rich. His rhetoric deepened the divisions among the “99 percent” and eroded democratic norms once easy to take for granted.

The right-wing reaction to Occupy and its related movements has been so all-consuming that it’s hard to remember the feeling of 2011, when it seemed like a deeper kind of democracy was on the rise. Protesters everywhere tried out radical forms of self-governance in their camps, inspired by the texture of online networks. Rather than making demands of politicians, they debated how to make politicians obsolete. Whatever ideology any individual held, together they were anarchists, in the sense of trying to root out hierarchy wherever it appeared. Egyptian Google employee Wael Ghonim created the Facebook page that brought thousands to the streets in Cairo, but he refused the mantle of leadership, calling the movement “leaderless.” A document passed by Occupy Wall Street’s consensus-based mass assembly described its participants as “autonomous political beings” who were “engaging in direct and transparent participatory democracy.”

When celebrities visited Occupy Wall Street to offer support, debates broke out about whether they should be allowed to speak or have any special treatment. Occupiers challenged each other to “check your privilege,” to become ever more vigilant to how inequalities of power and wealth distort the practice of equality.
There was a time when the open-source website for the Occupy Wall Street assembly was a beautiful machine, publishing up-to-the-minute news and discussion and proposals — a glimpse of politics moving with the speed and interactivity of the internet. If technology can aggregate people’s input instantly, why should we need a government designed for the time of horse and buggy?

Approximations of Occupy’s organizational details would appear on the news, recounted by perplexed reporters. For a while, the old protest chant, often repeated then, seemed true: “The whole world is watching.” Occupiers would talk with a straight face about the number of days or weeks it would be until a revolution came, like the ones in Egypt and Tunisia earlier that year.

The movements of 2011 put a lot of trust in social media and viral messaging, whose strength couldn’t outlast the raw, old-fashioned kinds of power they were up against. Before long in Egypt — and perhaps now Tunisia — the democratic revolution turned into a new dictatorship. Authoritarians have taken power from Brazil to Belarus, while deepening their hold in China and Russia. On January 6th, the United States saw an attempted coup on behalf of a billionaire, the landlord of a Wall Street office tower who represents capitalist decadence like no other. Wealth inequality, it goes without saying, has only grown worse.

Now a decade older, many of those same activists are on the defensive, trying to protect what remnants of 18th century democracy we have left. Veterans of Occupy are campaigning for candidates and making policy demands, attempting to secure a more humane republicanism. They have helped organize a surge of economic populism, as well as calls for climate justice, defunding police, and canceling student debt. They learned from Occupy’s early failure to center racial justice and embraced Black Lives Matter. Onetime protesters have helped lead a revival of the solidarity economy, trying to inscribe democracy into daily economic life. They have backed the candidacies of Bernie Sanders and Alexandria Ocasio-Cortez. Some hold positions of relative power; others are still living on the street. Some have developed software, like Pol.is, Action Network, and Loomio, that continue democratic experiments from Occupy in code. But when police destroyed the occupations, they buried the most radical features of what the anthropologist-organizer David Graeber called “the democracy project.”

Perhaps the protests were too utopian, not pragmatic enough, and had some things backward. But I am not interested in fixating on what the young and impatient Occupiers should have done instead. There is no simple formula for what makes social movements effective, for how to back up their numbers and networks with the power to make lasting change. But too often the focus has been on what the 2011 activists did or didn’t do, rather than the reaction they awakened. Too rarely do we mourn all the hopeful visions forgotten when a phalanx of police comes to restore order.

The fact is that when a global, unarmed movement called for a democracy worthy of the 21st century, the response from those in power was no, with all the cruelty they thought they could afford. The crackdown isn’t even over. Wars that began in 2011 are still raging in Syria and Yemen, and elected authoritarians are still consolidating power. Trump’s “favorite dictator,” Egypt’s Abdel Fattah el-Sisi, has made the crackdown a way of life. They are not done.

Democracy must be rediscovered in every generation or it withers. It must evolve with what people long for. In the early planning meetings for Occupy Wall Street, I witnessed organizers shift from making a mere demand of the system to making a space for that rediscovery to begin. I was there the night their insurgent village was torn down. That place was far from perfect, but the condition of democracy in the years since only shows how much we needed the rowdy experiments happening there.

The reaction against the movements of 2011 has demonstrated how dangerous real democracy can seem to those who gain from its decline. The consequences are everywhere around us. So much of the mess of the world right now happened because, for some, the noise of democracy was unbearable. In the decade to come, that noise needs to grow louder.

Nathan Schneider is an assistant professor of media studies at the University of Colorado, Boulder, and the author of, among other books, “Thank You, Anarchy: Notes from the Occupy Apocalypse.”