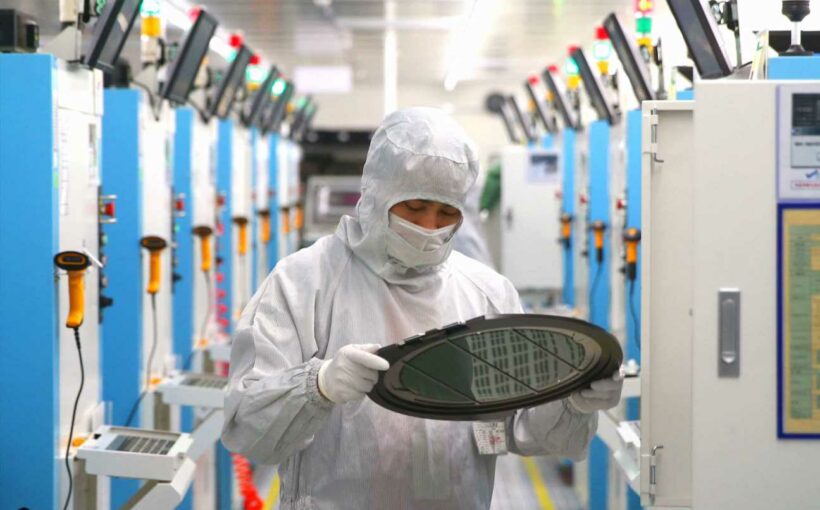 The Senate is set this week to pass one of the largest industrial bills in U.S. history to bulk up the nation's technology manufacturing in an effort to match competition from China.

The bill, expected to easily clear the upper chamber with support from Republicans and Democrats, includes tens of billions of dollars for scientific research, subsidies for chipmakers and robot makers, and an overhaul of the National Science Foundation.

The scope of the bill, the final product of at least six Senate committees and weeks of debate, reflects the many fronts in the U.S.-China rivalry and offers a rare glimpse at bipartisanship for legislation to counter Beijing's economic and military expansion.

The proposal, subject to final changes, would:

Some commentators see the Innovation and Competition Act of 2021 as a modern parallel to the Cold War between the U.S. and the Soviet Union. Failure to expand the nation's semiconductor production, or reroute rare earths supply chains, advocates say, could leave the U.S. at a strategic disadvantage in the years ahead.

The final bill is expected to cost about $200 billion.

Senate Majority Leader Chuck Schumer, Democrat of New York and one of the bill's top cheerleaders, has for weeks worked to assemble the legislation's many components. The final bill is expected to include well over 1,400 pages of text.

"The bipartisan legislation will be the largest investment in scientific research and technological innovation in generations, setting the United States on a path to lead the world in the industries of the future," Schumer said from the Senate floor Monday.

The bill is a product of six committees and features dozens of Republican amendments, he said, adding the chamber would consider some final amendments Tuesday before passing the bill.

"It will be one of the most important things we've done in a very long time, the largest investment in scientific research and technological innovation in generations, decades," Schumer said.

For their part, Senate Republicans have mostly stuck to the Trump-era's tough-on-China approach even if it means a higher price tag or a more-involved federal government.

The largest part of the mammoth piece of the legislation is a proposal previously known as the "Endless Frontier Act."

Now an amendment, that provision from Schumer and Sen. Todd Young, R-Ind., would give new life to the National Science Foundation, appropriate $81 billion for the NSF between fiscal 2022 and 2026, and establish a Directorate for Technology and Innovation.

"Today, our leadership is being challenged by a state capitalist regime in Beijing that threatens to win the next century by dominating the critical technologies that are bound to shape it," Young wrote in a May op-ed published by the Ripon Forum, a Republican opinion journal.

"It is time for the United States to go on offense by passing the bipartisan Endless Frontier Act, which would solidify U.S. leadership in scientific and technological innovation through increased investments in the discovery, creation, and manufacturing of technology critical to national security and economic competitiveness," he added.

Even conservative Sen. John Cornyn, R-Texas, has voiced support for the bill. His bipartisan CHIPS for America Act has since been folded into the broader bill and would appropriate about $50 billion to boost U.S. semiconductor manufacturing.

"The reality is despite the back and forth on process and some political snipping, the Senate has put together a very comprehensive piece of legislation," Dewardric McNeal, who was a Pentagon policy analyst during the Obama era, told CNBC.

"Some of the biggest questions that many China experts had about this legislation was whether or not it would focus on 'running faster than China,' by investing more in ways to stay ahead and beat China technologically, or would it focus more on blocking China's advancement and tackling China if it does get too far ahead by using legal and regulatory measures," he added. "It appear as though the Senate has tried to do a little bit of both."

The bill would fund a grant program managed by the Commerce Department that would, to an unspecified extent, match financial incentives offered by states and local governments to chipmakers who improve upon or build new factories.

Schumer and others hope such programs will entice domestic and foreign chipmakers to open new, state-of-the-art foundries in the U.S. The globe's most-advanced foundries are operated exclusively by Samsung in South Korea and by Taiwan Semiconductor Manufacturing Co.any in Taiwan.

The rare display of bipartisanship is even more impressive considering the long list of policy items congressional Democrats have been unable to advance even with majorities in both chambers.

Infrastructure has fared little better: Hundreds of billions of dollars still separate Republicans and Democrats, many of whom campaigned on the promise to pass a once-in-a-generation bill to repair the nation's roads, bridges and waterways.

Obvious to all major parties involved — Democrats, Republicans and Chinese officials — is that the bill and its broad support provide the clearest proof yet that Washington's deep skepticism of Beijing was not exclusive to the Trump administration.

Even over the past week, President Joe Biden has underscored his administration's deep distrust of the Chinese government.

The White House announced Friday that it will expand restrictions on American investments in certain Chinese companies with alleged ties to the country's military and surveillance efforts, adding more firms to a growing U.S. blacklist.

On Aug. 2, Americans will be barred from investing in 59 Chinese companies including Aero Engine Corp. of China, Aerosun Corp. and Huawei Technologies.

The administration announced on Tuesday, hours before the Senate was expected to vote on the technology bill, that it will look into dramatically expanding U.S. production of lithium batteries, rare earth minerals and semiconductors.

Earlier this year, the White House announced it would conduct a 100-day review of domestic supply chains for critical materials and technologies. Officials have been careful not to mention any one country by name, but commentators say the review and resulting recommendations are seen as an effort to ease U.S. reliance on Chinese exports.

Many U.S. technologies seen as critical to future economic and military superiority — electric vehicles, smart cities, faster computers and cutting-edge weaponry — are currently made with shipments of rare earths from China.

It supplied 80% of the rare earths imported by the United States between 2016 and 2019, according to the U.S. Geological Survey.

A more overt shot at Beijing comes from a portion of the bill known as the Strategic Competition Act, a product of the Senate Foreign Relations Committee.

The Strategic Competition Act would also ban U.S. officials from the 2022 Beijing Winter Olympics, and demands an end to the Chinese Communist Party's "ongoing human rights abuses, including the Uyghur genocide." The provision would not bar U.S. athletes from participating in the games.

While debate over several amendments prevented the Senate from passing the legislation before the Memorial Day recess, the bipartisan passion for ensuring the U.S. remains competitive is expected to linger in the House, where the bill is projected to endure another round of deliberations before sending it to Biden's desk.

Biden, who on Tuesday called for $50 billion to boost semiconductor production and research, is widely expected to sign the legislation and has voiced general support for beefing up U.S. chipmaking.

House Speaker Nancy Pelosi, D-Calif., on Thursday reiterated her support for a diplomatic boycott of the 2022 Olympics.

"While China has changed over the past generation, its government's appalling human rights record has not," she said in a press release dated June 3. She timed her statement to mark the 32-year anniversary of the Chinese government's violent crackdown on pro-democracy demonstrators in Tiananmen Square. "The U.S. Congress has and will continue our decades-long bipartisan and bicameral commitment to holding the Chinese government accountable."

Despite the pointed language in the bill, McNeal said comparisons to the U.S.-Soviet Union Cold War are ill-advised and misleading.

"It is not a cold war at all. however, it is something much more complex and complicated than that given the high level of economic integration and dependency between the US and China," he wrote. "Unlike the Soviet Union, China has no true diplomatic allies to speak of (North Korea and Pakistan notwithstanding), no military alliances, and no ideological block to bolster its diplomacy and security policies.  All things that the Soviet Union could boast."

"It still has to go to the House and there is no real way to know what the process (always messy) will be over there nor what the final outcome will be," he added, "but the Senate has done something big and significant."