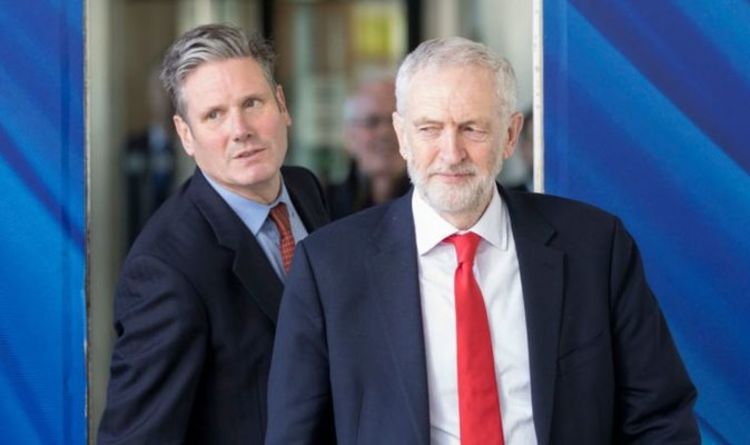 Mr Corbyn may have stepped down as Labour leader in 2020 after leading his party to a disastrous defeat in the 2019 general election, but he is still proving to be a thorn in his successor’s side.

Instead of retiring from politics, Mr Corbyn is still an MP for Islington North and continues to provoke Sir Keir from the Labour backbenches.

In 2021, he launched “Project for Peace and Justice,” which is described as “a hub for discussion and action, building solidarity and hope for a more decent world.”

But reports have been circulating that Mr Corbyn is considering turning his recently launched project into a new political party.

This could be catastrophic for Sir Keir as politicians within the Labour Party continue to be split into two factions with one group on the party’s “hard left” and the others taking a more “centrist” approach.

Labour’s lack of unity has been described as a “civil war” with figures such as Mr Corbyn leading a group of MPs on the far left and Sir Keir leading those who take a more centrist approach.

The creation of a new party would not only run the risk of dividing Labour’s politicians but it could also take votes away from Labour at the next election.

Former Labour MP Tom Harris wrote in the Telegraph: “There’s no escaping the fact that a new party emerging from Corbyn’s recently launched Peace and Justice Project would pose some organisational and presentational difficulties for Starmer.”

Mr Corbyn has criticised Sir Keir for a range of things, most notably he has accused the Labour leader of failing to stick to his leadership pledges and to challenge the wealthy and the powerful.

During a fringe event in 2021, Mr Corbyn openly condemned his successor for failing to stick to his leadership pledges.

He told the Mirror: “I read the 10 points that he put forward for the leadership and I think when you put forward something you should try and stick to it as a policy thing.”

Mr Corbyn also wrote in The i newspaper last year: “Labour’s leaders have shown they want to prop up, not challenge that wealth and power.

“There is another way forward, that is based on social justice, and in the policies the majority of people actually want, not what the establishment and its media mouthpieces insist they should want.”

Sir Keir has so far refused to restore the whip to Mr Corbyn after Labour suspended him from the party in October 2020.

Mr Corbyn was originally suspended from Labour after he said antisemitism in the party had been “dramatically overstated” for political reasons.

He made the comments in response to a highly critical report from the Equality and Human Rights Commission into how the party handled anti-Jewish racism complaints by party members when he was the party’s leader.

He had his party membership reinstated 19 days after his initial suspension but Sir Keir has refused to allow the party whip to be restored to him the Commons.

From January 2022, Mr Corbyn has sat as an independent MP after Sir Keir and his party turned their backs on him.

He told the BBC Mr Corbyn “knows what he must do” to move towards reinstatement.