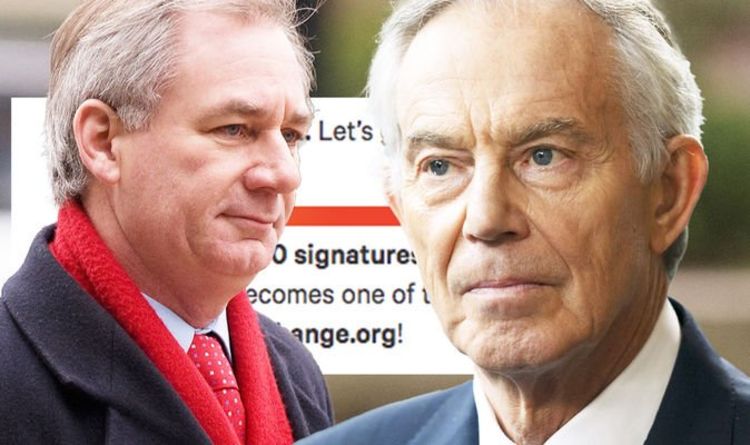 Mr Hoon’s explosive allegations dealt a huge blow to the former Prime Minister – and boosted campaigners calling for him to be stripped of the knighthood he was handed by the Queen in the New Year’s Honours List. Mr Hoon, who served in the post from 1999 to 2005, first spoke out in 2015, at which point Sir Tony dismissed his remarks as “nonsense”.

However, the former Labour MP for Ashfield has used his new autobiography, See How They Run, to restate his account of what he characterised as a “cover-up” by Number 10.

Specifically, he claimed to have been told by Jonathan Powell, Sir Tony’s former chief of staff, to incinerate the document – and to have locked it in a safe instead, where it may even still be located.

In his book, published by the University of Chicago Press in November, Mr Hoon writes: ‘Without a clear mandate in the form of a second UN resolution authorising the use of force, the UK’s participation in any invasion depended on a complex interaction involving several not entirely consistent UN resolutions.”

It had been the responsibility of Lord Goldsmith to resolve the question, and Mr Hoon explained the attorney general had produced “a very long and very detailed legal opinion that only sophisticated scholars of international law would understand”.

He added: ‘I was sent a copy from Downing St under conditions of considerable secrecy.

“I was told that it was for my eyes only and that I should not discuss its contents with anyone else. I had no idea who else had received a copy.”

Mr Hoon said after reading the document “several times” he had concluded Lord Goldsmith believed any invasion of Iraq would be “lawful” if the Prime Minister believed it was in the UK’s national interest to do so.

He added: “It was not exactly the ringing endorsement that the Chief of the Defence Staff was looking for, and in any event, I was not strictly allowed to show it to him or even discuss it with him.

“Moreover, when my Principal Private Secretary, Peter Watkins, called Jonathan Powell in Downing St and asked what he should now do with the document, he was told in no uncertain terms that he should ‘burn it’.

“Peter Watkins was the very model of a principled British civil servant, and that instruction worried him greatly.

“He asked me what we should do and I agreed that we should lock the document securely into an MoD safe to which only he had access. For all I know it is probably still there.”

Sir Tony has been at the centre of a whirlwind of publicity since news of his knighthood emerged at the weekend.

The petition, upload to the Change.org website by Angus Scott, had attracted 710,434 signatures as of 8am on Wednesday.

The description of the petition states: “Tony Blair caused irreparable damage to both the constitution of the United Kingdom and to the very fabric of the nation’s society.

“He was personally responsible for causing the death of countless innocent, civilian lives and servicemen in various conflicts. For this alone he should be held accountable for war crimes.”

It adds: “Tony Blair is the least deserving person of any public honour, particularly anything awarded by Her Majesty the Queen.

“We petition the Prime Minister to petition Her Majesty to have this honour removed.”

Another, unnamed Government minister suggested it was “only right” to reward Sir Tony, claiming he had done “many good things” for the UK.

Express.co.uk has approach Sir Tony via the Tony Blair Institute for Global Change comment, and Mr Powell via the Inter Mediate charity.